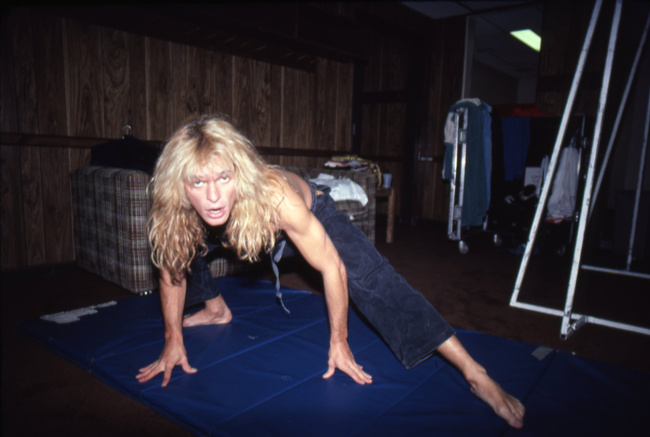 When a reporter with Metropolis, Japan’s leading English magazine, asked David Lee Roth if he was studying kendo while living in Tokyo in 2013, the Van Halen singer and solo star was quick to correct him.

“No it’s not kendo. It’s kenjutsu. And I’m going for my menkyo kaiden and I’ve been doing that since I was 12,” he explained. “Today, I’m the master of the six-foot staff – it’s actually a shower curtain rod, but it just looks great in the lights and I use it on stage.”

If there’s such a thing as a Platonic Form of the rock star who incorporates martial arts moves into his performances, then Diamond Dave is certainly the closest thing to that ideal that we’ll see in our lifetime. And the quote above is a perfect example of what makes him so brilliant. Whereas Elvis, the most infamous musical martial artist, took himself too seriously and ended up making a mockery of the disciplines he loved with his coke-fueled karate rants and heart attack-courting katas, Roth does the opposite. He takes his martial arts far more seriously than he takes himself, and it makes his onstage antics playful instead of try-hard or sad. There’s a gleeful, unchained exuberance to DLR’s iconic kicks and split jumps, a guileless desire to show off all of the cool shit he’s learned that might make him look a little goofy, but doesn’t really embarrass himself or everyone he’s ever trained with.

This is why people celebrate him with fan-made videos like The Ultimate David Lee Roth Karate Kick Compilation, 1 minute and 16 seconds of pure hot-for-sensei genius that makes this collection of Jean-Claude Van Damme doing the splits seem as sluggish and meager as an early-90s Van Hagar record by comparison.

DLR’s trademark moves are the result of a lifelong love of martial arts. Thanks to the large Japanese population in his hometown of Pasadena, California and Mr. Yoshida, his kendo-teaching next door neighbor, he grew up surrounded by Japanese culture and quickly developed an affinity for it. He held his first sword when he was barely out of the single digits.

“The first time I saw an iaido kenjutsu demonstration with an actual kata I was maybe 10 years old? Eleven?” he told Metropolis. “I held that in my hands and... Careful what you show your kids! Inazuma!... Crrrraashh... Lightning...!” 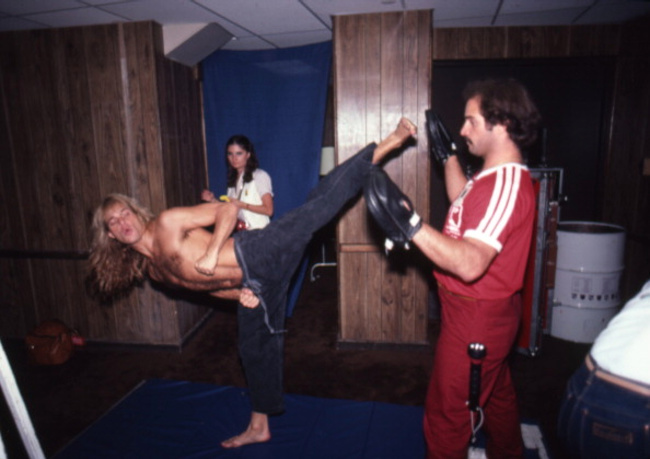 In the 1980s Roth added some kenpo to his arsenal, taking up with Elvis’s old master, the legendary Ed Parker, and his associates. In addition to sharpening his skills, Parker, along with kenpo master Frank Trejo, also helped Roth with his dayjob.

“We choreographed some of the moves that David Lee Roth used in the Van Halen rock video for their song ‘Jump,’ because David was a student of Mr. Parker,” Trejo wrote in My Friend Ed Parker, a tribute to the late master in the April 1991 issue of Black Belt Magazine.

Roth dedicated the song to another martial arts mentor of his, championship kickboxer Benny “The Jet” Urquidez.

By the early aughts, DLR, who was well on his way to becoming somewhat of a renaissance man by that point, had added a bunch of private combat and language lessons to his already packed schedule.

“I’m talking to you here from the Mojo Dojo, which is my house in Pasadena, and I call it that because I started my first martial arts lesson on my 12th birthday up here at the Buddhist temple on Raymond Avenue in Pasadena. To this day, Monday, Wednesday, and Friday at 7 in the morning, I train in Brazilian jujitsu [sic], and then at 8:15, my Portuguese teacher comes over,” he told the AV Club in 2002. “Two nights a week, I have a kendo instructor come here, who’s in his 60s, and I have a kendo hall that I built in my house here.”

While the primary purpose of all of this training is to keep his mind and body strong for life both on and off the road, it also provides him with a slew of new stunts for concerts.

“I have moves onstage it took me two years to learn,” he declared in Buzzfeed’s epic 2013 profile, David Lee Roth Will Not Go Quietly. 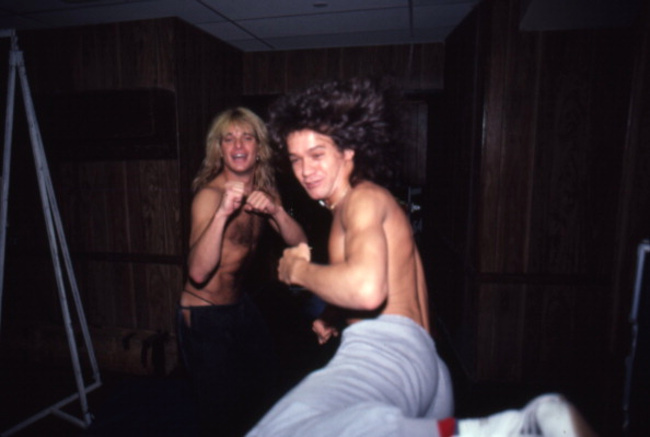 As with any combat practice, though, rock ‘n’ roll martial arts displays come with a certain amount of risk. Roth learned this lesson the hard way when a performance-related injury at a show in Philadelphia forced him to to cancel the rest of his 2003 tour.

As his spokesman Todd Brodginski put it at the time: “It was an incident onstage where he was doing a kung-fu maneuver and he got hit with a staff that he uses. He was doing a very fast, complicated 15th-century samurai move.”

This was no minor staff-knocking, either. Diamond Dave ended up with 22 stitches on his face as a result of the accident, and a temporarily diminished ability to sing and dance on stage.

DLR, now 60, learned this lesson again last week when Van Halen performed on Jimmy Kimmel in support of their forthcoming live album and summer tour. Mere moments into the performance, Roth hit himself in the face with his mic stand while executing one of his trademark moves. While the resulting gash eventually required 14 stitches, he was able to finish the seven song set with a Macgyvered bandage across his nose.

Like any good martial artist, though, Diamond Dave doesn’t let these minor setbacks get him down. Nothing does. A black belt is a white belt who never quit. A master has failed more times than a beginner has even tried. After all, you’ve got to roll with the punches to get to what’s real.

The Karate King in the Boxing Ring