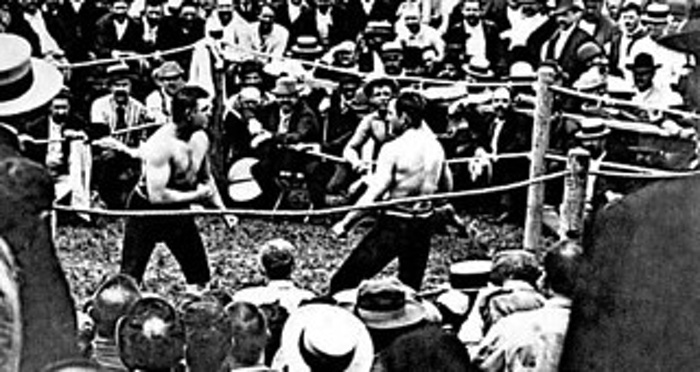 The American boxing obsession began in the early nineteenth century with the 1816 fight between Jacob Hyer and Tom Beasley. Although there was no formal governing body established to enforce Queensbury rules, the bout was described as maintaining “some attempt” at structure. New York was the home of the American boxing craze, and numerous individuals from all classes trained and sparred in new gyms sprouting up throughout the city and state. Although upper and working-class men alike practiced boxing in the 1820s, a mere decade ended the gentlemanly involvement in the “manly art of self-defense,” as boxing was first titled. Critics deemed the sport violent; a letter to the Post in 1826 declared,

Such practices are brutal and detestable in themselves and disgraceful to the country in which they are suffered to take place. What is called by its advocates the science of defense, is only the commission, always of horrible violence, and sometimes murder.

While this recriminating letter may seem hyperbolic, the dangerous reality of boxing made itself known in the 1842 bout between Thomas McCoy and Christopher Lilly. At this point in the history of American boxing, regulation existed only on a peripheral level, and bouts often went dozens or even hundreds of rounds. In the 120th round of the McCoy/Lilly fight, McCoy collapsed dead in the ring after receiving more than eighty direct blows. The inquest revealed that McCoy’s lungs were filled with fluid and he drowned in his own blood—a horrific death that enflamed critics and spurred a public debate that played out in an infamous trial.

On September 13, 1842, Christopher Lilly and Thomas McCoy met in the Bowery in New York City, a grudge match that had culminated only a few weeks earlier when Lilly challenged McCoy to a fight and, upon the latter’s refusal, punched the unsuspecting McCoy in the face, knocking him to the floor. This unsportsmanlike move was followed the two agreeing to a match, and in true pugilistic fashion, both McCoy and Lilly went into training with the best boxing ‘professors’ of the day.

A journalist for “The Ring,” a publication covering prize fighting in New York, shared his experience with the more somber and conservative “Spirit of the Times.” This incredible piece of pugilistic journalism provides a look into the life of an 1840s prize fighter and, sadly, into his ghastly death. The reporter arrived at the home of Thomas McCoy on the day of his death, and watched the fighter play with his dog, joke with his cronies, and kindly thank the neighboring Irishwomen who stood at the docks to wish him luck before his fight. It may have been apocryphal or the eerie articulation of fey, but McCoy promised that he went “to win or die!” The match was held just outside of the Hastings landing in Westchester County, New York. Over 1,500 spectators surrounded the makeshift arena, which was described as grassy and mostly flat.

Christopher Lilly was 23-years-old at the time of the event. Standing a few inches over the 20-year-old McCoy and weighing 140 pounds, Lilly’s sinewy arms had a clear reach advantage over McCoy, who weighed 137 pounds. The young men faced each other and flipped a coin for position, which McCoy won. He chose the higher ground, but apparently this decision caused him to stand with the sun in his eyes. Each man then handed over $100, the bulk of which would go to the winner of the fight. For $100, Thomas McCoy would lose his life.

At precisely 1:00pm, the first round began. Both men landed punches, with McCoy, his ear already bleeding, knocking Lilly to the ground. Lilly jumped up unscathed and his corner apparently jeered at McCoy as the latter retreated to his corner at the end of the round with a smile on his face. The account of the fight featured in the “Spirit of the Times” is an in-depth play-by-play of the 120 round fight. In nearly every single round, one of the men is felled, but since this fight occurred prior to the institution of, or at least, the adherence to, the Queensbury rules in the U.S., there were no standing eight counts nor was there a limit on the amount of times a fighter could be knocked to the ground. The reporter’s descriptions of every single round include remarks on who was in the crowd, the actions of the corner men, the state of betting as the odds changed from round to round, and, of course, the fight itself. The early part of the fight was marked by equity between the fighters.

Round 8 – Lilly led off with a sharp cheek blow, followed by a tremendous repeater on McCoy’s mouth; McCoy then rushed in, and after a few sharp exchanges, closed, endeavored to throw Lilly, who turned him, however, as he was going down, and fell heavily on him.

The reporter provided a thorough and descriptive account of the bouts, with a heavy reliance on simile.

Round 28 – Lilly cool as a cucumber, and wary as an Indian – McCoy, on the contrary, too free, and too ready to fight. (Strange that his seconds could not tell him to restrain his ardor.) Lilly put in three successive terrific neck blows, which had a squelching sound that could be heard all over the crowd. McCoy game as a pebble, and fearless as a lion, rushed wildly in, caught two or three more before he could clinch, and then was badly thrown.

By Round 30, McCoy was bleeding heavily from his nose and one eye was nearly swollen shut. Lilly had scarcely a bruise, and continued to not only deliver blows on McCoy, but to also cause the man to miss and fall on his own accord. McCoy was not yet licked. In Round 35, he taunted Lilly, pointing to his bloody face and yelling “Why don’t you hit me there?” When Lilly obliged, McCoy rallied, punching him so hard that Lilly not only was thrown, but he hit his head on the ring post on the way down.

The men had been fighting for an hour by the time Round 50 came to an end. While Lilly did not seem too worse for wear, McCoy was bleeding profusely and his face was so swollen and disfigured that he could barely see. Yet McCoy appeared to recover for a bit, throwing Lilly on head with a hip-toss in the 54th Round. But his revival was short lived and by Round 70, he staggered in the ring, gasping for breath as he spat blood down his own chest. Some members of the audience yelled for McCoy’s corner to “Take him away!,” but the intrepid (or foolish) McCoy pushed on, indefatigable despite his nearly closed eyes. The pugilists continued their battle of attrition, with Lilly landing carefully timed punches and throws, and McCoy taking more than he gave. Round 88, two hours into this fight, and the crowd called for an end, reportedly yelling, “Shame, shame!” and that it was “a shame to see a good man beat to death!” They did not yet know how prophetic their words would be.

As the fight wore on, McCoy was literally stood up by his corner and Lilly would knock him down again. The crowd yelled, “For god’s sake, take him away!” But somehow, McCoy would still manage, every few rounds, to land a shot or throw Lilly to the ground. Undoubtedly, both men were exhausted, but McCoy, by this point, must have already been suffering from severe internal bleeding. He struggled to breathe and continued to cough up blood, but somehow, aided by his corner and by his own determination, stood up and went for Lilly again and again.

Round 107 – McCoy stood, fighting for air with his tongue hanging out of his mouth. Our dauntless reporter included an almost liturgical description of the man,

And though his manly heart around,
No active currents warmly bound;
Tho’ swelled to bursting every vein,
No token gave he yet of pain

And McCoy staggered towards Lilly, only to be knocked down again. Meanwhile, in his corner, the physician hired by McCoy’s seconds to protect their fighter, watched and did nothing, despite the obvious danger. The reporter took a remarkably long digression to describe the ‘wench’ of a doctor who, he noted, was undoubtedly at fault for McCoy’s death. He paints the image of villainous doctor, complete with “a shock of stiff, dirty hair…a shingle for a face…and …inexpressive milky eyes.” In Round 118, McCoy fell again and the crowd pleaded for his corner and the doctor to “save his life!” His second responded, “He aint’ half licked yet.” Yet only two rounds later, after a hard throw by Lilly where he landed heavily on top of his opponent, McCoy lay lifeless on the ground after two hours and forty-three minutes of hard fighting. The fight was officially over—as was the life of twenty-one-year-old boxer Thomas McCoy. The intrepid reporter elbowed his way through the throng of spectators to see Thomas McCoy die right there in the ring.

He lay upon his back, his face and neck one bruised, unseemly, bloated mass of incipient corruption; gasping for breath, and sucking by the violence of his respiration, his bloated lips far back in his mouth. In the next moment, he ceased to breathe, and the word went in a hoarse whisper round, that he was dead!

McCoy’s body was brought to his home and upon the post-mortem examination, doctors found his lungs were filled blood and thus determined that he had died by suffocation.

McCoy’s death, the first in the American boxing arena, sparked outrage and provided prize-fighting critics new ammunition to use in their quest to outlaw boxing. On Tuesday, November, 22, 1842, eighteen men, including Christopher Lilly, his seconds, the seconds of Thomas McCoy, and the ‘wretch’ of a physician, were indicted on charges of manslaughter. There was no statute on the books at that time that expressly prohibited prizefighting, although that would arrive later, so the men were charged with manslaughter and “riot and affray.” After only three hours of deliberation, the jury deemed the defendants guilty. The judge condemned prizefighting and those would who participate in such a spectacle of immortality. Indeed, he declared that the audience of a prizefighting event consisted of “a large assemblage of the idle, disorderly, vicious, dissolute people…who live by violence…who live by crime.” In a country that was launched by Puritanism, Americans were horrified by Thomas McCoy’s death, but they had no trouble blaming his death on the amoral, ruffian lifestyle of the prizefighting community.

Prizefighting already had its detractors, but Thomas McCoy’s death galvanized the movement across multiple states to ban the sport of prizefighting to protect both the individual fighters from harm and Americans from the foul, reprobate populace that participated in such acts. Thomas McCoy’s gristly death was a terrible moment in American prizefighting history. Nineteenth century prizefighting would, no doubt, look very different to us today than boxing or even MMA. Fighters were able to head-butt, throw, stomp, kick, and gouge their opponents. And there were no true referees to control the match or anyone to really look out for the health and well-being of the fighters. McCoy’s death and subsequent litigation instigated the safer and more watered-down version of the sports that flourished in the following two hundred and fifty years. American fans of prizefighting could look to their English brethren and see how, with just a bit of organization and consideration for the safety of the fighter, prizefighting could transform into a gentlemanly pastime—the most manly art of self-defense.