January 31, 2004, was a big night for the UFC. The card that night featured two championship fights—one between welterweight champion Matt Hughes and BJ Penn, the other between light heavyweight champion Randy Couture and Vitor Belfort. But the really big thing about UFC 46, though no one knew it at the time, was that it marked the debut of the man who go on to become MMA’s biggest star and the face of the UFC. During the prelims, a 22-year-old kid from Canada named Georges St-Pierre squared off against another highly touted prospect, Karo Parisyan, and kicked off one of the greatest careers the sport has ever known.

The young man who beat Parisyan that January night, though showing some holes in his game, also showed flashes of the brilliance and domination that would come to define his reign as champion. From the start St-Pierre was able to take Parisyan down and better him with relentless ground and pound, though the renowned judoka was able to attack St-Pierre's right arm and come close to securing a kimura in the first minute of the fight. 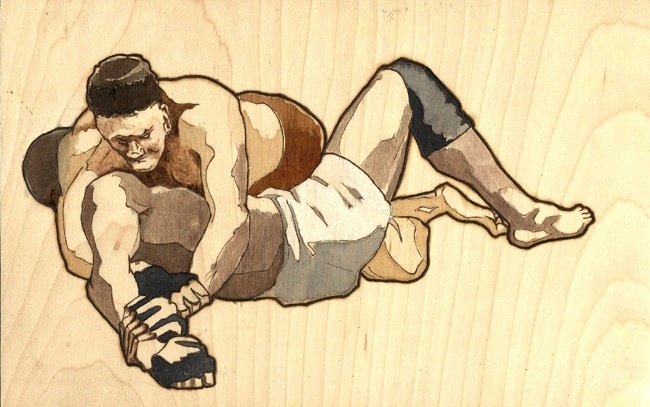 St-Pierre was able to muscle his way out of all of Parisyan’s submission attempts, however, and dictate where the fight went. For minutes on end, GSP battered Parisyan with fists and elbows, though the judoka's demeanor never changed and his submission attempts continued.

The damage Parisyan absorbed only increased as the fight progressed, and in the second round, St. Pierre opened him up, changing the tone of the fight’s commentators. Where before they seemed to be waiting for the judoka to capitalize on an opening, now they expressed concern that the damage he was taking would be too great to overcome.

The most striking difference between the young Georges St-Pierre and the champion he would become is the absence of the jab, a technique GSP would master and use to knock around numerous top contenders like Josh Koscheck and Jake Shields. That night in 2004, it wasn't really a part of his bag of tricks. Instead, the young fighter drew primarily from his karate background and sent out numerous head kicks throughout the fight. He even wrapped up the final seconds of the fight with a beautiful flying knee.

Looking back at Georges St-Pierre's UFC debut, it's strange to see him get into genuine trouble: It wasn’t often over the last 10 years that GSP got flipped onto his back or was forced to defend submission attempts. But the basis for GSP’s future dominance was there even at the beginning: takedowns followed by relentless top control and supported by a massive gas tank. Just add a few years, some seasoning, and a whole bunch of endorsement deals and you’ve got the biggest star MMA and the UFC has ever known.

Frankie Edgar Comes Back From the Brink

Chuck Liddell and Wanderlei Silva Give the People What They Want