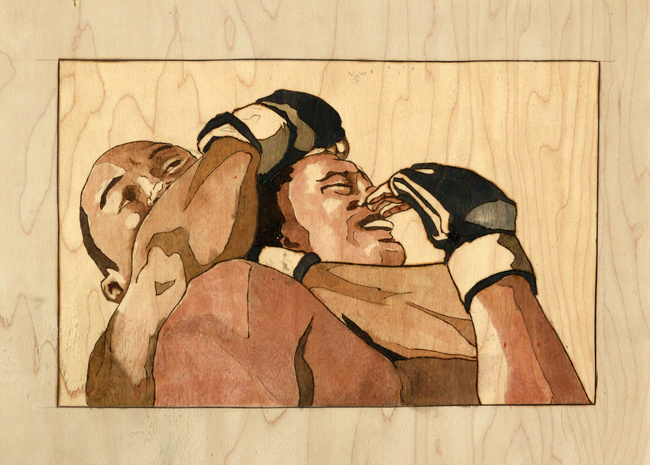 On January 31, 2004, at UFC 46 in Las Vegas, the now-legendary Penn vs. Hughes trilogy began. The fight was huge for both fighters. For then-welterweight champion Matt Hughes, a win would mean setting a new record for UFC title defenses. For Penn, who had already run through the UFC’s lightweight division, it was a chance to prove he could move up in weight and still be the best in the world.

The fight was a classic wrestler/BJJ player contest and Hughes never really got going.

Fifteen seconds into the fight Hughes botched a takedown attempt and ended up on his back. He would never regain his feet. Penn's attack was relentless, as it always is on the ground. Unable to get off his back Hughes was out-grappled and outclassed.

As the first round came to an end Penn, in a remarkable display of grappling fluidity and daring, went from standing to ground-and-pound to full mount to back control to a rear naked choke in just 20 seconds, forcing Hughes to tap and give up his belt.

Penn's post-fight celebration has become iconic: Screaming and slapping and punching himself while his teammates carried him around the Octagon on their shoulders, he looked like a madman, born to fight. Penn then gave a bizarre post-fight interview that only solidified his fans' endearment.

"To be the best you have to be one crazy son of a bitch and that's the truth," he said.

When I first got bit by the MMA bug and went from casual fan to information glutton, it was easy to understand why some guys had huge followings. Fedor Emelianenko was humble but a terror, both on the feet and on the ground. GSP was clean cut and cerebral and he sculpted his game plans like an intellectual artist. Anderson Silva lived in the Matrix, Chuck Liddell could knock out anyone or anything, and Wanderlei Silva might actually murder you.

But BJ was different. His fans seemed to have a love for him that wasn't tied to a single narrative. They had a variety of reasons: he fearlessly jumped weight classes, he had a ridiculous killer instinct, he was rich kid who fought just because he loved it, he was a jiu-jitsu prodigy.

But the real reason why BJ is such a beloved figure in MMA might be because he grew up before our eyes. Despite being a brilliant grappler, BJ was an mixed martial artist first and foremost (arguably one of the first)--a precocious kid who at 22 years old rattled off three straight first-round finishes to start his career and has been with us ever since. Today you can't even imagine MMA without him. Ten years ago he made the biggest splash of his career by defeating the greatest welterweight of a generation and redefining what a fighter in the UFC could do.

Frankie Edgar Comes Back From the Brink

Chuck Liddell and Wanderlei Silva Give the People What They Want