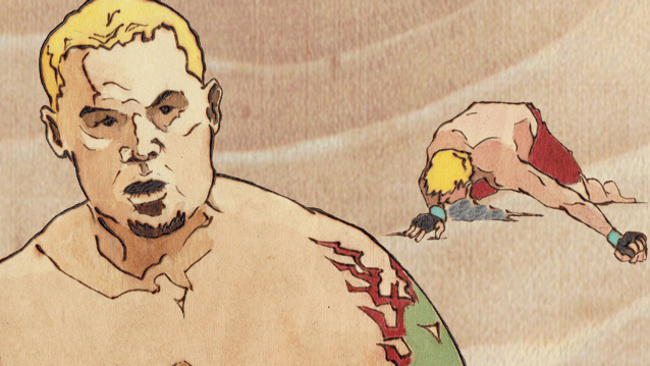 One year ago on May 25th, 2013, Mark Hunt fought a #1 contender fight against Junior Dos Santos and turned in one of the better fights the UFC's heavyweight division had ever seen. While Hunt did not emerge victorious, the mere fact that he'd risen to that level is a remarkable accomplishment.

Let's take a look at how that happened.

The UFC purchased Pride FC in March of 2007, along with the existing contracts of their fighters, of which Mark Hunt was among. Hunt was made a seemingly generous offer: collect the money he was owed as per the contract, and walk away. The UFC had little interest in the 5-6 kickboxer, but Hunt insisted that he earn his money and fight out the contract. The UFC obliged and put him in against Sean "Big Sexy" McCorkle who promptly submitted the kickboxer via armbar in just over a minute. This was par for the course for Hunt, a powerful standup fighter whose losses betrayed a woeful ground game. Except for a KO loss to Melvin Manhoef (totally understandable as Melvin only throws knockout punches), he'd been submitted in every one of his MMA losses.

Hunt's record was misleading though. A novice to MMA, he'd been thrown to the wolves from the start and his losses all came to Pride's luminaries: Yoshida, the olympian who took a prime Wanderlei Silva the distance twice, Josh Barnett, Fedor Emilianenko, Alistair Overeem and Gegard Mousasi.

Now in the UFC Hunt was on the edge of obscurity, but he was dedicated to becoming a well rounded mixed martial artist and promptly wrote his own Cinderella story. At UFC 127 he squared off against one of Brock Lesnar's training parnters, Chris Tuchscherer. The wrestler dragged Hunt to the ground and tried to exploit his known weaknesses, even locking in a deep kimura. But Hunt's training showed and he fought out of the submission. Back on the feet he clipped Tuchscherer over and over, bloodying him while anticipating his shot. As the fight wore on and Tuchsherer slowed, Hunt was able to land an uppercut he'd been throwing all night. Finally it connected and the Minnesotan crumbled in on himself. Hunt, certain of his win before Tuchsherer even hit the ground, showed the fans what a walk-off KO looked like. The crowd roared and he went of with a pocketful of Knock Out of the Night money. 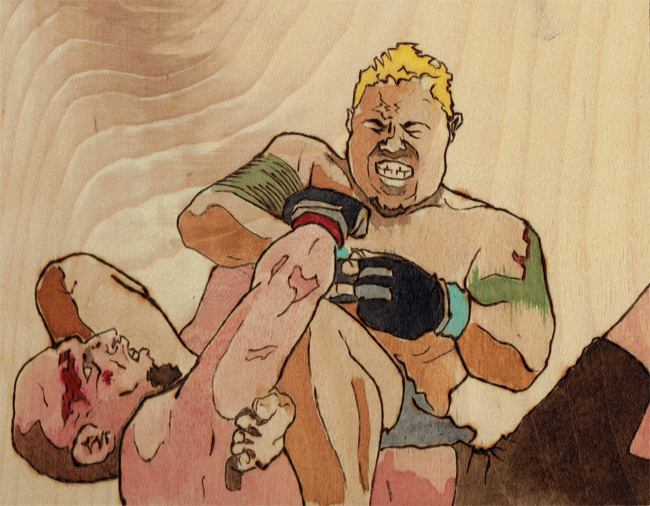 At UFC 135 Hunt squared off against "Big" Ben Rothwell, a towering veteran who lived at the upper reaches of the 265 lb. weight limit. Rothwell had obviously studied Hunt's losses and decided to take the Samoan down and submit him or ground and pound him out. Hunt again weathered the early storm and some bad positions, pinned against the cage on his back. As the fight wore on it became a war of attrition. Both men were exhausted but Hunt's excellent standup was wearing away Rothwell's ability to mount any offense. The most shocking moment came with seconds left in the 2nd round as Hunt caught Rothwell in an armbar and Rothwell, a look of disbelief in his bloodied eyes, was only saved by the bell. Hunt took the decision, but more importantly he had put together two wins against veterans and shown a vastly improved ground game where he made his opponents pay for their mistakes. 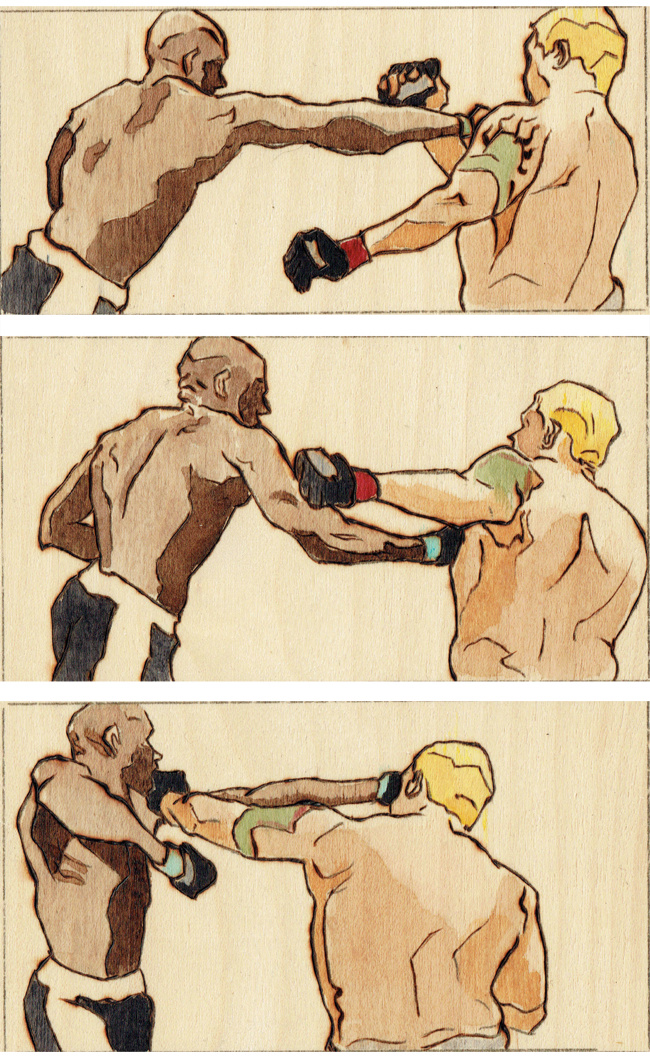 At UFC 144 Hunt was paired off with the statuesque Cheick Kongo, the visual polar opposite of the Super Samoan. Instead, Hunt thrived against a fighter who chose to engage him on the feet, and showcased his crafty side, baiting Kongo into attacking and countering with his devastating left hook. With his opponent staggered and retreating the rotund Hunt chased him down and viciously pounded out a TKO in under three minutes.

These three wins prompted the #RallyForMarkHunt hashtag and mobilized a grassroots twitter campaign for Hunt to challenge Junior Dos Santos for the heavyweight title when Alistair Overeem dropped out of UFC 146. While an ultimately unsuccessful movement, Mark Hunt had officially become a contender. Dana White was compelled to address his fans in the media and was given another ranked opponent. 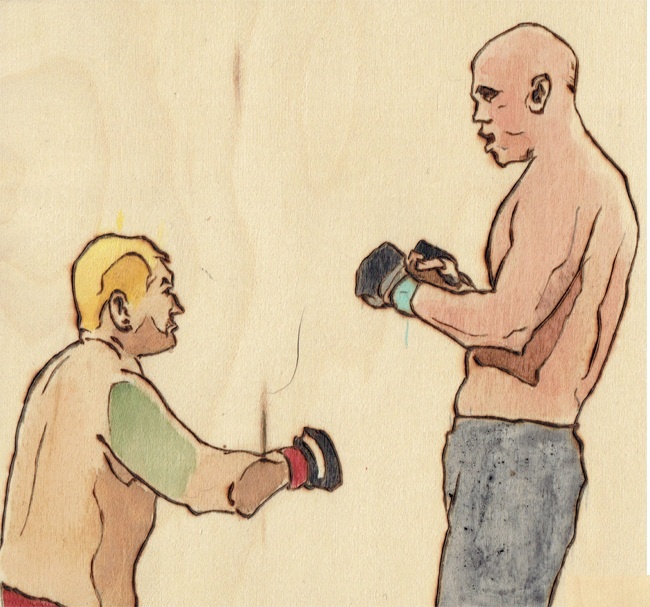 Hunt was paired against "The Skyscraper" Stefan Struve, another European kickboxer. Once again his opponent tried in vain to finish the Super Samoan on the ground, only to find himself in deep water and a depleted gas tank. After both men exchanged heavy blows for two and a half rounds, Hunt threw up a leaping left hook that broke Struve's jaw and resulted in another walk-off KO. 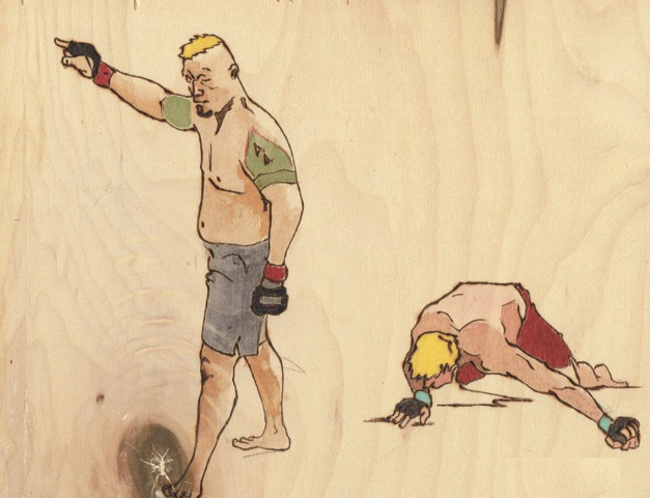 One of the more remarkable things about Mark Hunt is his ability to charm a crowd with virtually no trash talk, or talking at all for that matter. After a monstrous knock out, the crowd started to look forward to his one word answers of "yea" (your ground game is really improving!) and "good" (how does it feel to get the win through such an amazing knockout?!!).

Since his #1 contender fight with Junior Dos Santos, he went on to have another classic battle with Antonio "Bigfoot" Silva and is now being considered for a "Battle of the Bulge" matchup with another fan favorite, Roy Nelson, all at the age of 40. 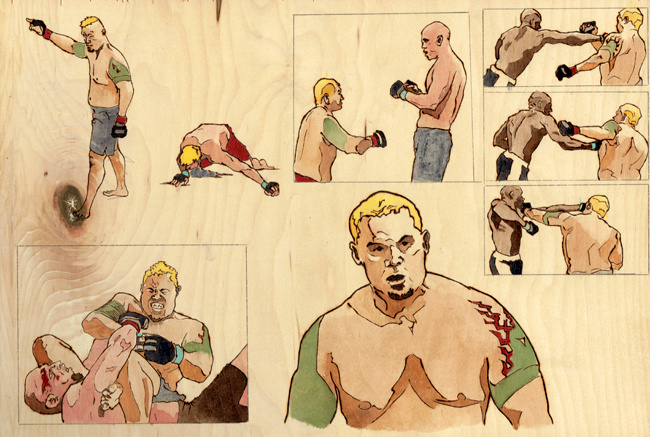