Demetrious Johnson: A Casualty of Hyperbole Fatigue, Size-ism, and His Own Greatness 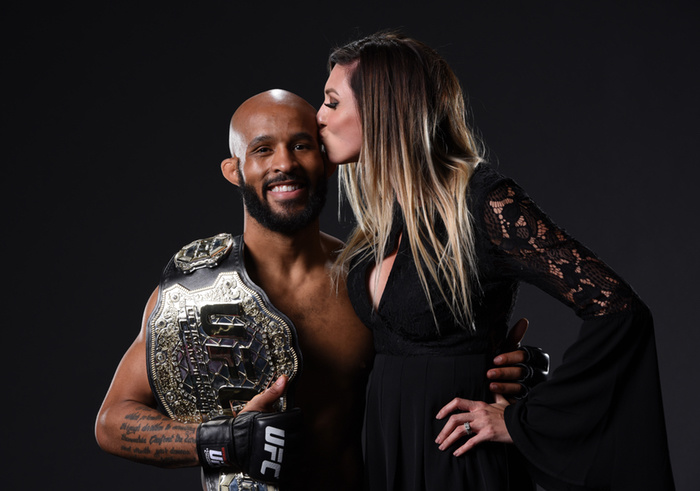 Demetrious "Mighty Mouse" Johnson sat in the front row with a championship belt on the table before him like a meal, and with no questions asked of the best pound-for-pound MMA fighter. It was a Friday in March at a press conference shoehorned into the turbulence ahead of Conor McGregor and Nate Diaz’s first meeting, and the stage was packed with 18 fighters whose personalities loomed large and small and whose bouts have since played out or fallen apart. Even Henry Cejudo, the Olympic gold medalist and Johnson's 125-pound opponent at last spring's UFC 197, got a query. But apparently no one wondered what the only flyweight champion the UFC has ever known had to say.

There's another Demetrious Johnson fight this weekend at The Ultimate Fighter 24 Finale in Las Vegas. This time it's against Tim Elliott, a former Titan FC flyweight champion, 3-3 UFC vet, and last man standing out of The Ultimate Fighter 24: Tournament of Champions, a season of the reality show organized around finding Johnson's next challenger. But I can't stop thinking about all that was left unsaid—actually, unasked—back in March. Along with the crowd exiting during his headlining bout of the UFC 174 and the basement-level pay-per-view buy numbers reported after that event, it was another symptom of disconnect between how great a fighter Johnson is and how little everyone else cares about watching him work. Think pieces about why Johnson can't compel an audience along with him are practically their own genre, but they endure because the phenomenon endures: why, after nine title victories and half a decade undefeated and the top spot on the pound-for-pound rankings, don't more people care about Demetrious Johnson?

Part of the answer: Johnson is a casualty of hyperbole fatigue. The UFC leans way too heavily on superlatives—the toughest challenger, the most important fight, the biggest card in UFC history—whenever it tries to sell you something, and you can only take so many elevated descriptors getting shoved down your throat before you lose your taste for all of them. Johnson, who isn't so much boring as more given to talk about video games than MMA, shoulders almost none of the PR burden.

The irony is that Johnson has a strong claim to being the most talented fighter in the UFC today. His April fight against Cejudo was a master class in clinch fighting, punctuated with a first-round TKO. His 2013 knockout of Joseph Benavidez was the stuff of nightmares. He ground John Dodson and Ali Bagautinov into powder over 15 combined rounds. The finishing armbar sequence over Kyoji Horiguchi looks like a best-case-scenario jiu-jitsu drill sped up to double time. With that victory, Johnson scored the latest submission win in UFC history—a record that, unless the number of rounds in an MMA title fight changes or we stop measuring time in minutes and seconds when our extraterrestrial overlords arrive, will stand forever.

But that's a stupid, meaningless designation, much like Johnson’s status as the best pound-for-pound fighter. The pound-for-pound designation is a thought experiment that puts fighters who could never engage each other onto even terrain by setting aside the concerns of weight classes (without the cruelty of an open-weight tournament), but it ignores the gifts and disadvantages afforded along the spectrum: the flyweight’s indefatigable pace and body that weighs as much as one of Cro Cop’s legs, the heavyweight’s power punches and cardio inspired by a chain-smoking asthmatic. It’s fun to talk about pound-for-pound status when you’re drunk precisely because it’s a useless conversation.

And as much as we might not want to admit it, the pound-for-pound label stops convincing at the lowest end of the weight spectrum because we are a society of size-ists, and little guys just can't convince the average idiot that they're dangerous. It’s why Hollywood actors treat their bodies like chemistry labs. It’s why you can get a job as a bouncer even if you can’t throw a punch as long as your traps go to your ears. It’s why Royce Gracie—the personification of Brazilian jiu jitsu's small-man-taps-big-man ethos—still has a bodyguard with watermelons for biceps.

But it also has to do with the distance Johnson has put between himself and everyone else in his division. With Johnson showing no intention of returning to 135 pounds, the weight class where he lost to current champion Dominick Cruz, it's telling that his next opponent arrived via a dead-the-in-water reality TV vehicle and that his next best options are rematches with Cejudo and Benavidez, against whom Johnson has a combined three wins and zero losses. He’s cleaned out flyweight in a way that both demonstrates dominance and is also self-sabotaging. In their primes, Anderson Silva, Jon Jones, and Georges St. Pierre were all brought to the brink of defeat or even past it, leaving space for doubt that would compel you to watch. In four years, Johnson has rarely suggested that he could ever lose. How much faith could you have a TV-groomed challenger slaying a 125-pound apex predator?

None of these side narratives seem to matter to Johnson, whose blue-collar approach to fighting disconnects him from considerations of his place in the sport. During a Facebook Q&A with fans yesterday, Johnson's perfunctory answer to whether he'd fight Cruz or McGregor (or probably Stipe Miocic) was the same: if the money's right. As for the pound-for-pound conversation, Johnson sounds as tired as everyone else. "There was one point at time I was the number-one pound-for-pound fighter in the sport, Jon Jones hadn't fought in eight or nine months, he got reinstated and blew right past me and not one thing in my life changed. Not one single thing," he told Fox Sports. "Still woke up, took a (expletive), wiped my ass, poop on the toilet paper looked exactly the same, went to the gym, trained, sweat still came out the same."

There's the upshot of the Demetrious Johnson puzzle from the man himself: artificial accolades and questions at press conferences aren't substitutes for wins and deposit slips.

The Tao of Demetrious Johnson