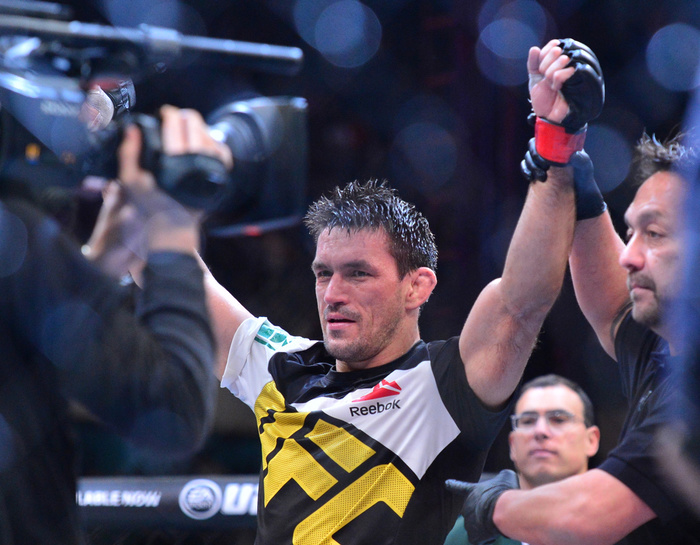 Demian Maia is making fighters ask themselves a lot of uncomfortable questions about the idea of being a 'well rounded' martial artist. When Maia burst onto the MMA scene, he had the usual streak of submissions, the usual development into a mediocre striker, and the usual difficulties with opponents who could keep him on the feet and show this up. On Saturday night, Maia added a sixth victory to his incredible streak at welterweight, once again not absorbing or throwing a single meaningful strike on the feet. In handing the highly respected veteran, Carlos Condit, his first loss by submission in his UFC career, Maia showed that no guard is sturdy enough nor back elusive enough once he gets a hold of his man.

The victory was vintage Maia. The single leg takedown. Tripoding over Condit to avoid getting his hips locked down in a closed guard. Transitioning into reverse half guard facing Condit's feet as Condit finally got a hold of something with his legs. Getting the cross face and sneaking into the three-quarter mount, securing back control as Condit attempted to buck and roll. The choke came quicker than usual but it was the same path Maia has trodden from feet to back a hundred times before without a single false or late step.

Maia's footwork was on point from the get go as he pressure Condit but gave ground whenever Condit threw back, hoping to get in on a shot when Condit threw himself out of position with a kick as he often does. Instead it was as Condit performed his second or third stance change of the fight: Maia used the lag time between changing stances and initiating an attack to shoot in on what was now Condit's leading leg.

The interesting questions of the fight were whether Condit could fight elusively when he has spent his entire career running in with punches and squaring himself up, and whether his aggressive guard game could force Maia onto the defensive for long enough for Condit to scramble up. Both of those questions were emphatically crushed by Maia. With Stephen Thompson and Demian Maia both so clearly deserving of their own shot at Tyron Woodley's belt it's time we got on with it and announced the next title fight.

Elsewhere on the card, Jim Miller and Joe Lauzon put on a great fight even if it didn't live up to the torrid pace of their first brawl. Lauzon provided the pressure and scored hard straight rights down the centre, while Miller fought with his back to the fence and looked for body shots to slow Lauzon's pace. It was a gruelling contest and most felt like Lauzon's takedowns would seal the deal, but the judges saw Miller as the victor. As controversial as the decision was, a five round fight between these two would have been terrific and give the judges more to work with. It was certainly fun to see both men trying new things on the feet—it is easy to see how Donald Cerrone's mauling of Miller's body has added a new weapon to Miller's arsenal for instance—and the back-and-forth groundwork as Lauzon advanced to mount and Miller immediately began escaping back again reminded us of the calibre of grappler that both men are.

The highlight reel finish of the night came from Paige VanZant who connected a gorgeous jumping round kick to the face of Bec Rawlings after seemingly wasting her energy missing such kicks through the first round. Low kicks and movement with bursts in the clinch were obviously the plan of VanZant and Rawlings did a good job of parrying kicks and getting in with her hands even if the low kicks were troubling her.

Vanzant is still obviously a very incomplete product but it was interesting to see her stick to a gameplan that relied on more than just overwhelming aggression and grit. Pressure and pace can take a fighter a long way but they can also hide the holes in that fighter's game. Taking a step back and addressing those holes when Rawlings might well have been the kind of fighter Vanzant could overwhelm through pace and pressure is commendable.

Perhaps the best scrap of the night came in Anthony Pettis' return to featherweight against Charles Oliveira. Throughout the bout Oliveira was able to secure takedowns and take Pettis' back time and time again, with Pettis scrambling out to top position with remarkable consistency. Pettis did his hurting with a couple of his trademark kicks to the body, though his tendency to stand upright through his combinations with little concern for what is coming back saw his head get turned around several times while he was in 'attack mode'.

The end of the bout came out of nowhere as Pettis used the fence to bridge and then sit up from the bottom of side control, exposing his back again. Oliveira briefly had the back, lost it, and Pettis was on top again. Oliveira pursued Pettis as the American tried to scramble up and left his neck out for Pettis' guillotine. Pettis guillotined the guillotiner, handing Oliveira just his second submission loss. Both of Pettis' issues showed themselves at this new weight—both the wrestling along the fence and the difficulty working in combinations while being mindful of counter punches—but besting Oliveira is no mean feat. A great fight, a great feather in Pettis' cap, and not a terrible showing from Oliveira either.

A decent night of fights, topped off by a spectacular Maia finish over a world class opponent. The question now is who gets a go at Tyron Woodley first?  Remembering Andre Galvao's trouble when he couldn't take Woodley down in Strikeforce, Maia's best hope might well be that Stephen Thompson goes first, beats Woodley, and then attempts to defend the belt against Maia. But with the UFC making title matches like Dan Henderson versus Michael Bisping II, we are very much through the looking glass and anything is possible.