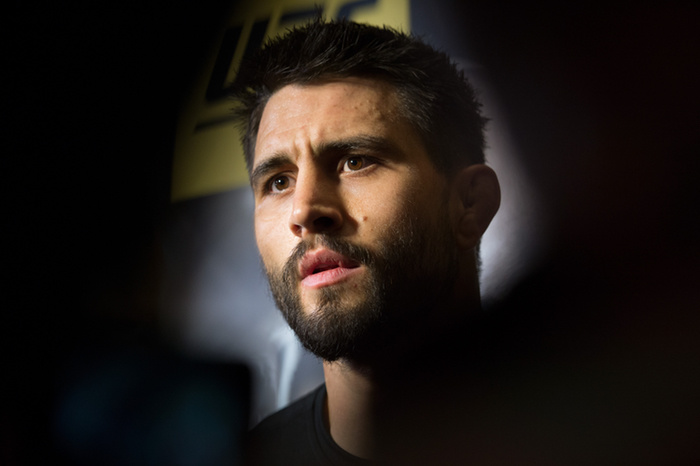 The glacial march of Demian Maia towards a welterweight title shot gets a shot in the arm this weekend as he fights long time contender, Carlos Condit. For the longest time, Condit seemed to be on the way out of contention—looking thoroughly unimpressive against Tyron Woodley and Thiago Alves. When Condit was awarded a title shot in January of this year, the last impressive performance on his record came against Martin Kampmann back in 2013, and Kampmann himself had been retired for two years. But Condit rose to the occasion, putting on the fight of his life against the UFC welterweight champion, Robbie Lawler and losing a decision which it could have been (and in some quarters still is) argued that he deserved to win.

Over the course of that bout with Lawler, Condit threw a mind-boggling 495 strikes, connecting on just under 180 of them. A terrible connection percentage but volume has always been the friend of Condit. The bout took on the dynamic of Condit controlling the ranged exchanges, then getting drawn into brawls and losing the punching exchanges due to his upright posture and low hands.

Demian Maia, meanwhile, has had a career resurgence at welterweight by completely eschewing the other parts of the MMA game. He doesn't strike, he doesn't clinch fight, he grabs a hold of the single leg and either throws the opponent to the mat or drags them down on top of him. And if at any point they aren't cranking down on an overhook, Maia will just run to their back and climb on.

While the theme in Maia's game is 'position, position, position' Condit is almost the anthithesis of this. Condit is known for volume and the so called 'leg jabs' but he does have a penchant for swinging for the knockout. Flying knees are guaranteed in every Condit fight and it is with these that we begin to discuss the theme of Condit's bouts: throwing himself out of position. Against Johny Hendricks, Condit would push Hendricks to the fence, jump in for a flying knee and wind up on his back. Multiple times.

Similarly he got Tyron Woodley to the cage over and over, then ran in swinging and gave up his hips to the wrestler.

This giving up of position stems from two habits in Condit—firstly he rarely gets back to his striking position well after his kicks. This was highlighted in the Thiago Alves fight. Alves is past it but he has always religiously gotten back to his guard after his strikes. Every time Condit kicked, he would be out of position and Alves, who stayed in position to strike throughout, would pound his lead leg or nail him with counter punches.

The second facet is that Condit loves to run with his punches even when it isn't necessary. He uses the same rear straight, lead uppercut, rear straight running combination which Holly Holm does, and it has been hit and miss for both. While Condit did hurt Robbie Lawler with one such combination, and catch Thiago Alves with an elbow variation, he also squares up his shoulders and his stance every time he attempts it and winds up stepping in on top of his opponent. This causes him to eat counters or wind up in the clinch. Running with punches against Demian Maia who only wants the clinch would probably not be worth the risk.

Demian Maia's striking in recent bouts has been almost non-existent and to be honest focusing on avoiding the striking altogether might aid his career longevity even if it doesn't make him a well rounded mixed martial artist. It is as a guard passer that Demian Maia really excels though. Where you could describe many fighters' top games as smothering, Maia's is a more hands off form of control. He doesn't cling to opponents for dear life and maintain a static position with little hope of advancing.

He'll tripod up on his toes, he'll sit on top of opponents' butterfly hooks, and he'll put in hammerfists while he waits, but when he meets with resistance he will switch his hips and change the position altogether. A constant theme in Maia's instructionals, which are old but some of the most enjoyable available, is the deflection of power and the same theme can be seen played out in his fights as he switches his hips to smash into a leg weave, or when his opponent accepts the half guard as Maia tripods over them, and Maia switches his hips into the reverse half guard.

Reverse half guard is a Maia trademark from which he will look to sneak his trapped knee straight to mount and slap on a kimura if the opponent's hand comes up to prevent it. Gambledub wrote a terrific study on Maia's game, and BJJ Scout has created a four part video series on it, both of which are well worth your time and will help you appreciate the 'simple' game of Maia which could best be described as fighting in principles rather than forcing techniques.

And that could best sum up the fight—Maia is about the subtleties within the basics and avoiding strikes at all costs, Condit is about overwhelming opponents with weird spinning and flicking kicks with the occasional biting down on the mouthpiece to brawl.

For Condit, avoiding the running punches would be a good start. He could knock Maia out with them but when the tie up is to be avoided at all costs it barely seems worth the risk. A counter fighting strategy might be worth Condit's time. Against Dan Hardy, Condit demonstrated one of the first effective uses of low line straight kicks to prevent Hardy from stepping in on him with the left hook. Anderson Silva demonstrated that the effect of low line straight kicks against Demian Maia a few months before. Silva didn't want to engage the dangerous grappler, or risk having his legs caught, so he kicked very low and with linear strikes and Maia had no answer. Doing the same would be well worth Condit's time.

Keeping the distance is not only important for avoiding the takedowns it is useful in making the takedowns more obvious. If Condit can keep the pace of the fight measured and not simply be rushed to the clinch in the opening minute, he can begin to time Maia stepping in because Maia doesn't like to hang around on the outside. This is when the power striking of Condit can come in handy.

One of the interesting facets of this bout is Condit's guard. It has always been one of the division's most active and where many more accomplished pure grapplers would hang around looking for the perfect set up, Condit will just start throwing up submission attempts to make the opponent move. Against Maia that could either be ballsy and unusual enough that it surprises the grappling savant, or it could lead to easier passes for Maia into very bad positions for Condit.

For Maia it might well be worth trying what we jokingly call the 'Dagestani Back Step' after Ali Bagautinov and Rustam Khabilov. Stand near the fence and Condit will throw a kick or jumping knee, he'll throw himself out of position and the takedown will come far easier than shooting wild out in the open. The other advantage to the Dagestani Back Step is that the opponent is taken down towards the centre of the cage rather than towards the fence, making the wall walk a much more arduous process of shrimping towards the fence first.

Should Condit be fighting smart and keeping the distance it might be worth Maia throwing some kicks in hopes of instigating either a brawl in which he can duck in on Condit's hips or the clinch, or to get Condit to kick back. When Condit kicks he will often cross his legs for the opponent, but parrying his kicks across the body (except the low line kicks) has been done by most of his recent opponents and exposes Condit to shots on his hips.

Whether Condit surprises again, or Maia continues his streak, get back to Fightland on Monday and we'll discuss all the stuff that made the difference.

Nate's Turn: The Divergent Paths of The Brothers Diaz