Dennis Siver and the Power of the Back Kick 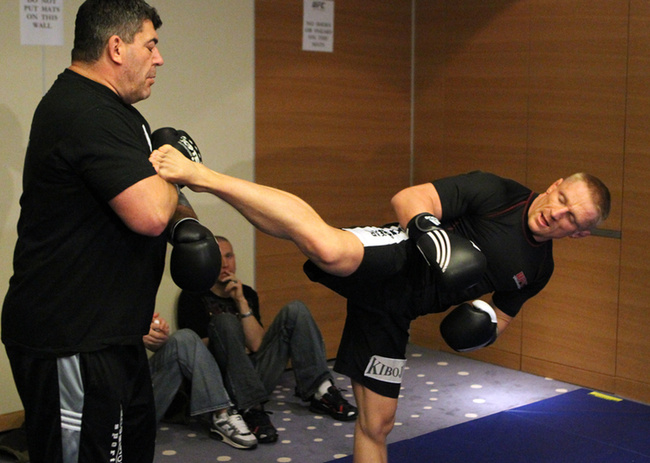 Most are counting Dennis Siver out this weekend. Certainly, the UFC isn't putting much effort into advertising Siver, this is The Conor McGregor Show.

We can talk about the specifics of the match up another day, but all you really need to know is that Siver is just about the last man in the top fifteen who both doesn't resemble a wrestler and hasn't already fought McGregor. Rather than getting hung up on Siver's drooping hands mid-combination, and one-size-fits-all left hook and duck in answer to everything thrown at him, today I want to talk about the technique which Siver is most famous for, the back kick. 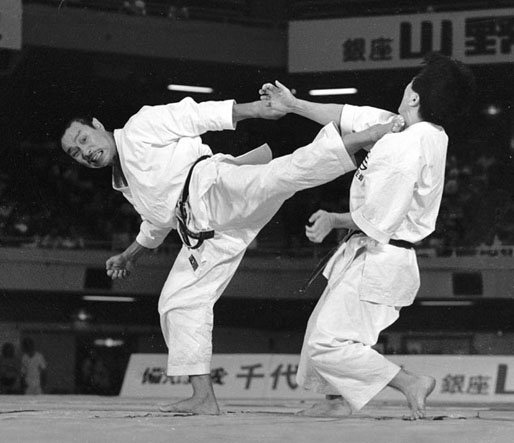 When I write “back kick” I am simply using the term to group two kicks. We're really just talking about thrust kicks wherein you show your opponent your back during the motion. The most important are the back kick and the turning side kick. The differences between the two come in both the chambering of the kick and the direction of the hips. A back kick is a mule kick, behind the fighter. A turning side kick is a side kick, with a turn before it.

The back kick exists in taekwondo, karate, Muay Boran and in the many forms of quan fa / kung fu, and has been around forever. Hell, everyone knows that you can kick backwards pretty hard if you need to. One lesson my father taught me after time as a private investigator was that should 'one' ever need to kick in a fairly unsubstantial back door and not cause too much of a ruckus, 'one' might turn his back, have a bit of a cough, and mule kick the door.

Can you do an unweighted squat? Then you can back kick hard enough to ruin someone's day. The ushiro-geri / back thrust kick / mule kick is simply a very powerful motion which can be mastered with relatively little difficulty. In the days of 'what would I do if I were attacked from this direction', the back kick filled the blind angle behind a martial artist.

The technique is not really considered a classical one, though you can find a few instances in classical forms of the falling back kick. Such as in the old Okinawan form, Unshu, in which the practitioner drops to his hands and knees to deliver the kick backwards into the groin. In Gichin Funakoshi's Karate-do Kyohan (suspected to be largely written by his son, Gigo) the back kick is treated as a response to a bear hug from behind, but to make the distance a back snap kick (Bas Rutten's favorite 'heel to the balls') first. To be honest, early martial arts texts are full of clutching at straws to find a self-defense scenario where an attack from behind can be met with a full back kick. But no one wants to throw a powerful technique in the slop bucket. Martial artists started turning their back and then throwing the back kick. You needed even more distance than you did for a kick straight backwards, but at least in sparring or measured fighting you could justify that distance. The karate back kick is traditionally chambered in front of the body, but in competitive environments normally comes directly from the floor, bending and extending in flight.

The turning side kick is the more common combative form, and is the one you will have seen Joe Rogan destroying heavy bags with on youtube. The difference being that rather than turning the back and then kicking, one pivots further on the standing leg so that one can throw a side kick. Most importantly, the kick is chambered high, as with the traditional side kick. The power that Rogan and others have shown to generate on this kick is undeniable, and the improved vision that one has when committing to a side kick rather than a back kick is an enormous advantage.

Probably the best instructional on the turning side kick that you can find!

General Choi's description of the technique as a “back piercing kick” places the same emphasis that Rogan does on not considering it a “spinning” technique.

But performing the kick is not the trickiest part. The difficulty with both forms of back kick is in setting them up. You can get away with the surprise factor sometimes, but after a catching one or two guys day-dreaming, a lack of set ups will kill the technique. Becoming known for the unexpected means that your techniques are no longer unexpected. Opponents train for them and if they see you turning your back, they have all the time in the world to go through their planned reaction. Case in point? Renan Barao.

Barao does very little to hide his back kicks, he just sort of throws them out when he feels like it or when he's running low on ideas. Against Eddie Wineland, who was getting the better of a boxing match, it paid off. Against T.J. Dillashaw, every time Barao turned his back, Dillashaw was already moving with the turn. As I put it at the time, following Barao's back around like the segment of a revolving door. Dillashaw stayed in the blind spot, the kick ran out of steam, and Dillashaw was back in with punches from a dominant angle.

Notice how painfully obvious the step across with the lead leg was? Because that's the difficulty in integrating a turning kick game with a kickboxing one. With low kicks, you need a squarer stance in order to pick up the lead leg to check. To turn on that lead leg, you need a narrower stance. If your method of back kicking is just to step across yourself and spin, you're hoping that the opponent is slow enough to not notice one of the most glaring telegraphs in the book, preceding one of the slowest, longest techniques.

Now one of the most basic set ups for the back kick is to hide it with the jab. The jab coincides with a step in with the lead foot, and for a longer jab—the traditional outfighter's jab—the lead foot will turn in and the stance will become more side on. You can't combination punch so well off of it, but it's the longest jab, presenting the least target. But in kickboxing and MMA, you can spin straight into the kick (or the backfist) which, obviously, isn't an option in the boxing ring.

It's basic, but it's the set up that Denis Siver favors. Notice here, against Paul Kelly, a long, stance-narrowing jab to show Kelly that's just what it is. Moments later, it looks as if another is coming but Siver goes straight into the spin. Kelly goes to the ear muffs because he doesn't know what's happening, and his liver is completely exposed to the kick. To be honest, Siver's feint into the kick might not be particularly convincing to a sharper striker. It is normally best to really commit to throwing the jab out before the spin simply to obscure the opponent's vision.

A more reliable way of setting up the back kick is to use the cage (or ring) to remove the opponent's retreat. He can only move in two directions to get off of the fence, and one of them is right into your spin. If they move the other way they'll probably be moving with enough urgency that they can't get back in on you. If they aren't moving fast enough, you might catch them anyway, just as Semmy Schilt did against Mark Hunt.

When Alexander Gustafsson fought Jon Jones, he took away much of Jones' kicking game with lateral movement, but the technique which Jones repeatedly went to, and landed, was the back kick as Gustafsson circled into it.

Notice, Gustafsson's lateral movement adds force to the collision on the back kick, but immediately afterwards Jones misses a side kick to the legs due to Gustafsson's circling.

A final, repeatedly proven method for ensuring the success of a back kick is to throw it as a counter. This involves timing the kick as the opponent comes forwards, which often requires a hop on the lead foot or actually jumping into the kick, almost on the spot. You lose a lot of stability and the power that the stretch of the stance or turn would have generated, but the power of the kick is still considerable. Especially as you're catching your man coming in. It was a favorite of Chuck Norris' competitive days, is still visible in TKD tournaments, and was most recently shown in MMA by Anthony Pettis in answer to Gilbert Melendez's constant pressure.

Of course, one of the great issues with turning or spinning techniques is recovery. When you get it right, something obstructs your technique and you can't just carry on through. You have two options, you can plant the kicking foot and try to turn back in to the opponent, or you can retract it and run.

Take another look at Siver's recovery from his kick. He attempts to plant the foot and turn back into his opponent. Not only can this be dangerous if an opponent starts swinging back while you're in punching range and still turning, it wastes time. The alternative is to do it the way it is so often done in points competition, to run away from the kick. The kicking leg is thrown back out in front of the fighter, and he is free to run away, or to turn and face his opponent from a safe range. This is the difference between the so-called “Shuri” turn and “Naha” turn when you find your opponent behind you. Shuri turns are directly into the opponent, meeting him strength for strength, Naha forms give ground and turn as they do so. But all that is for another day, when we're talking about traditional martial arts.

In the instance below, the kicker plants his kicking foot too close but demonstrates this run away. In karate competition you can essentially do this blind because a judge will whistle if he calls a score on your kick. Many karateka will attempt this technique near the corner of the mat and if it goes pear-shaped, they'll run straight out of the area. This resulted in a simple warning rather than the massive point advantage the opponent would receive for a scoring strike to the back after a failed back kick.

The back kick remains simultaneously one of the most underused moves in mixed martial arts, and one of the most inappropriately used. It's been a decade since Kazushi Sakuraba used the kick to punish Vitor Belfort in the corners of PRIDE's thirty foot ring, yet we still see maybe one good one every two or three UFC cards.  And the days when the shock factor alone could land the kick are fast coming to an end. The kicking game in mixed martial arts is forever becoming more important, I just hope that the memo gets around to everyone that set ups and recoveries are almost more important than mechanics.

Jack Slack: The Art of Catching the Kick