Did Jon Jones Just Get Inside Cormier's Head? 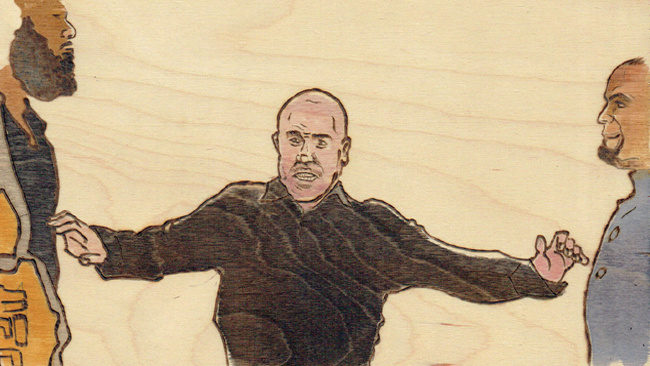 Media day at UFC 178 went 0 to a 100 real-quick. In front of a bunch of people—not to mention cameras from every major sports outlet—Daniel Cormier and Jon Jones touched foreheads, as many fighters do before a fight to try each other. Nothing out of the ordinary—except, seemingly unprovoked, Daniel Cormier lost his cool, put his hands around Jones’s neck and shoved him.

It took less than a second for Jones to get into Cormier’s head. Cormier just could not keep his cool guy demeanor, and in a surprising snap of character—as we know Cormier to be calm under pressure—DC shoved a towering Jones.

Not one to turn the other cheek, Jones pushed back and brought the entire stage down along for the ride. UFC’s Director of Public Relations Dave Sholler tried to keep them separated, but Jones essentially picked him up and moved him aside.

Quickly laid out on his back, Cormier got a first-hand preview of what’s coming his way on September 27th at the MGM Grand. In the video Jones looks like he’s seeing red and nothing else at all. He plows through the crowd and ultimately starts throwing fists at DC.

The fight was broken up shortly after it started, and Jones was definitely the victor here. Pissed off, Cormier threw what seemed to be a caramel-colored shoe in Jones’s direction. It hit a camera instead. Jones walked away seemingly unscathed and rather cool.

This pretty goofy incident leaves us with a few questions, mostly regarding the impact it will have on the fight. Did we catch a glimpse into Cormier’s future against Jones, or did these two champions just get a little carried away?

Watch the video and let us know what you think.