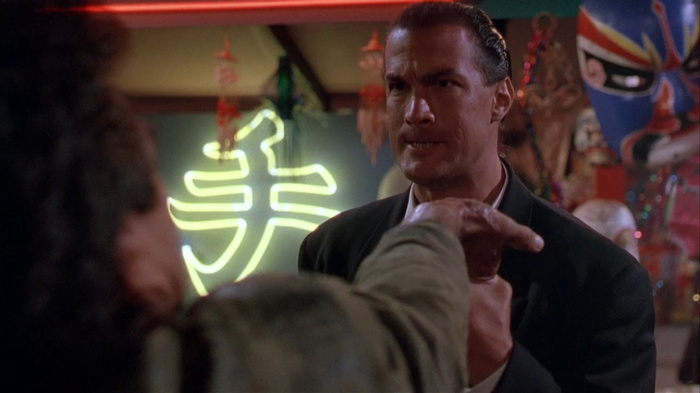 It seems that every time a James Bond film comes out now, a bevy of Bond-related listicles with titles like “___ Things You Didn’t Know About James Bond” pops up in its wake. Outlets like IGN, NME, and i09 have all offered variations on this theme over the course of Daniel Craig’s reign as 007, sharing random pieces of information on the 53 year old franchise that range from the amusing (author Ian Fleming may have based M on his mom/mother issues!) to the insipidly obvious (MI6 is a real thing). And there’s one particular Bond-related fact that pops up on a number of these lists that happened to catch our eye at Fightland:

While preparing for his big comeback as 007 in the not-entirely-official Never Say Never Again (1983), Sean Connery did something to anger his martial arts instructor. Said instructor, an up-and-coming martial artist and fight choreographer named Steven Seagal, retaliated. Years later, Connery discovered that Seagal had, in fact, broken his wrist.

With the theatrical release of Spectre less than a month away, and a potentially renewed interest in this little tidbit on the horizon, we decided to take a deeper look at it.

None of the lists seem to offer much in the way of a source for the Seagal fact. Some say that Sean Connery mentioned the broken wrist in an interview years later, but don’t provide any links, outlet names, or dates. Which, I suppose, is fine if you’re putting together a simple list and sharing it as one of many light-hearted anecdotes. It sounds amusing, after all, and makes everyone look relatively bad ass in the process. Connery looks tough for taking on the young Aikido master as an instructor, and for being so impervious to pain and dysfunction in the incredibly complicated series of bones and of joints that make up the wrist that he didn’t notice that anything untoward had happened to his for literal years. And Seagal comes across as a stern defender of serious martial arts business who does not tolerate impudence from big and spoiled Hollywood stars. Some Seagal fans worry that breaking a student’s wrist makes The Glimmer Man seem like too much of a hothead (here’s a message board thread in which the faithful discuss this issue with some handwringing and many Seagal emoticons), but everyone else seems OK enough with it to share the story without a second thought. Who, after all, would make this shit up?

If you’re as familiar with the UFC’s weird uncle Steve and his somewhat Baron Von Munchausen-esque biography as we are, though, you probably know that it never hurts to double or triple check a Seagal story. And so I made the executive decision to tackle the deadly ground of Google and see what I could dig up on this alleged incident.

The information from Mr. Seagal himself was far from conclusive. The best I could come up with was a 2012 interview that the action star did with the French geek website Daily Mars. When asked if he’d ever broken an arm for real, Seagal replied “You, you try to find out if I have broken the arm of Sean Connery I do not know if I did, I just trained. Perhaps this happened, but I think perhaps the fact is himself. I have not suddenly lost control and broke her arm as says the rumor. However, yes, in real life, I have broken the arms.”

This answer is unhelpful for two reasons:

But just as I was about to give up hope, I came across a breakthrough buried deep in the bowels of a Seagal-related message board: Sean Connery himself had told the story during an appearance on The Tonight Show in 1996 while he was promoting his latest film, The Rock (the story starts at 2:30).

When Jay Leno asks if he’s ever been injured while doing a stunt, Connery said that he’d managed to escape from The Rock unharmed, but did mention a less successful incident from his past.

“A number of years ago with a guy who’s become very successful, Steve Seagal. We were going to do a film called Never Say Never Again and there was a possibility I was going to Aikido and what have you. And I got ahold of Steven and we had this training in the building where I had an apartment and he was really very very good and everything and I got a little cocky because I thought I knew what I was doing because the principle is it’s defense, so it’s a pyramid and I got a bit flash and I did that,” he says, gesturing at Leno. “And he broke my wrist.”

He goes on to say that he had only recently discovered that it had been broken. And he finishes it all off with a joke about how the injury prevents him from reaching for his wallet.

So there you have it: According to Sean Connery himself, Steven Seagal really did break his wrist because he was fucking around while they were trying to prepare for a Bond film. Which hardly seems worth it when you take into account that this somewhat short of epic fight from Never Say Never Again was the result of all of that hard work and lesson-learning.