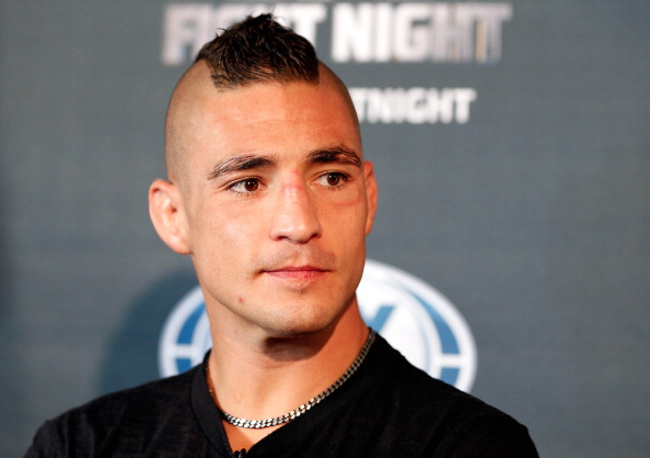 Winner of the middleweight tournament of the first season of The Ultimate Fighter—who has also fought as a welterweight and as a lightweight—has announced that he will drop even further to featherweight. He’s the latest to enter a division that has, as of late, received a lot of attention due to the talented roster it counts on—the José Aldo versus Conor McGregor saga has upped the division’s profile to one of the promotion’s most heated competition.

Standing 5’10”, he would be one of the division’s biggest fighters.

The Nightmare, a Jackson’s Submission Fighting product, has a strong record professional record of 25 wins and 10 losses and is a black belt in Brazilian jiu jitsu, hasn’t fought since last June, when he defeated Ross Pearson in a controversial split decision—he’s currently recovering from an injury to his collar bone. He made his announcement  to The MMA Road Show. This is Sanchez’ fourth weight-class transition, and he’s got some big fights in mind as he steps into this advanced phase of his career.

He told the show’s host John Morgan, “I think there's some great fights down there at 145. Even right away, I'm going to be a force in the division—right away. And I know all the 145-pounders are like, ‘Oh, that's if you make weight. If Diego can make weight.' That's what they're going to be saying. But, you know what? I'm going to do it. I'm going to make weight, and I'm going down to this division.”

He told the show that cutting weight has been easy and organic, and that as much as he’d like fights versus Clay Guida and Conor McGregor, he’s most interested in taking on Ricardo Lamas. Lamas is coming off a loss to Team Alpha Male’s sturdy Chad Mendes.

Despite being knocked out on is last outing, Sanchez still believes Lamas is an opponent worth going to war with, commending his will:

"The ultimate fight that I would like the best is Ricardo Lamas. He's coming off of a knockout loss, but the guy is a come-forward fighter. He won't try to run. This guy fights. He doesn't run away. He's not going to play the ‘I'm afraid of you and I'm going to run away.' He's going to come forward, and those are ultimately the best fights for me that showcase my skills and give the fans the best fights."

No opponent has been announced for his featherweight debut.