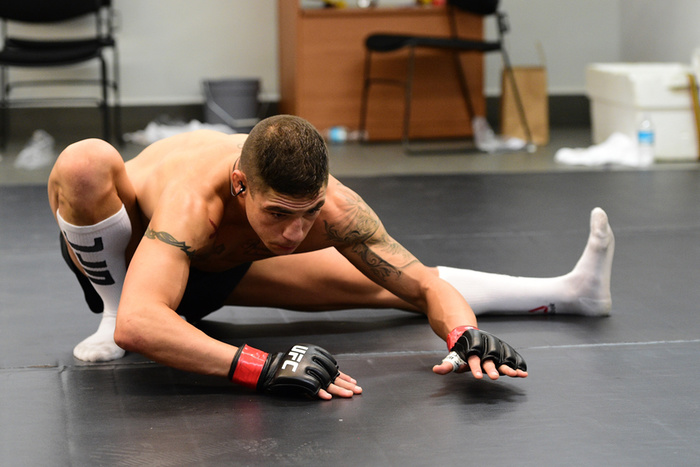 Not much of the way MMA was fought circa 2005 could be preserved in amber, revived in 2016, and expected to hold up. Watch fights from the UFC 52 era and even then you’ll hear commentators talk about how much the sport had evolved, but really, the foundation had just been poured and it wasn’t yet dry. Few fighters had the barest fluency in every plane of fighting. And yet aggression, a few takedowns, good top control, and the cardio to keep up the pressure until the final bell could compensate for virtually any other deficiency.

Through 11 years in the UFC and trips to four weight classes since his debut on the original season of The Ultimate Fighter, it's remarkable how much those attributes still describe 34-year-old 155-pounder Diego Sanchez. It's almost as remarkable as how well those attributes continued to serve him in his 25th fight in the UFC.

At The Ultimate Fighter: Latin America 3 Finale in Mexico City on Saturday, Sanchez took a unanimous decision over Marcin Held, a 24-year-old submission specialist and Bellator transplant making his UFC debut, by outworking him with better grappling, herky-jerky stand-up, and Energizer Bunny steadiness. The three rounds comprised the co-main event as well as a master class in Sanchez's specialties. He was a beat behind through the first round, eating Held's punches and a cartwheel kick and getting caught in a deep standing guillotine choke. But after improvising an escape by thrusting his legs off the cage and shucking off the submission attempt, Sanchez took control for the remainder of a fight largely fought on the canvas. He shut down leg locks, landed ground and pound, and stayed on top while Held suffocated at 7,000 feet above sea level. Sanchez has been the beneficiary of charitable judging in the past, but the 29-28, 29-28, and 29-27 scores in his favor were hard to argue in principle. 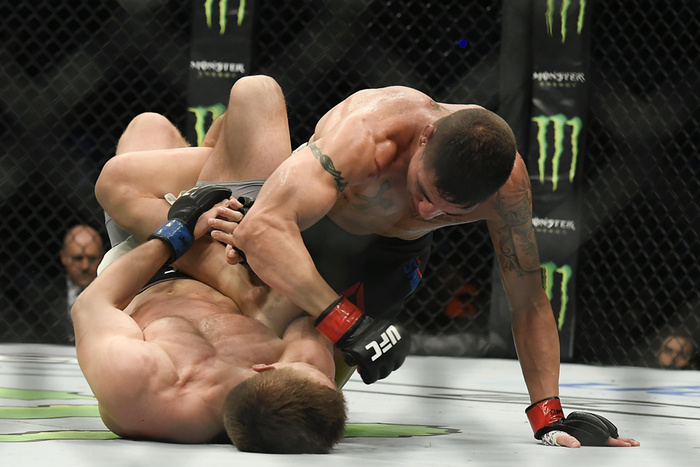 After the fight, Sanchez paid lip service to the idea of his evolution as a fighter. "I continue to learn and continue to evolve," he said at the post-fight press conference. "A lot of fans say, 'Oh, you've got to bring back the old Diego, the old Nightmare.' I tell them, 'No. In this sport, you have to continue to learn or else you will not be able to stick around the way I've stuck around in this sport.'"

The irony is that in drawing on that mid-2000s playbook to beat Held, he might as well have been fighting Karo Parysian or Luigi Fioravanti—the notable difference between Sanchez now and back then is the tattoos that look like bumper stickers you'd find on a Ford Econoline parked outside a church. Evolution in MMA borders on cliché, mainly because it's true: the last decade has layered flash and creativity and gamesmanship on top of the hardnosed wrestler with a gas tank—Jon Jones, Sanchez's teammate at Jackson Wink MMA in Albuquerque, is a better exemplar than most. But the staying power of what Sanchez does in the cage is proof of how vital it is. Pushing the pace, grinding out a takedown, landing punches that sway judges' thinking and don't leave your opponent room to breathe—those are equalizers, maybe even MMA fundamentals. Criticize Sanchez's ugly techniques and execution individually, but together they're timeless.

Sanchez himself, however, is not. He occupies an exclusive, semi-uncomfortable space: out of the original Ultimate Fighter cast, he’s the last man standing—all the rest have retired or faded away. He’s also nowhere near a title shot, and he’s been alternating wins and losses for half a decade. Some of those decision victories were gifts—the win over Ross Pearson comes to mind—and he always weathers heaps of damage, like the time Martin Kampmann diced his face into tuna carpaccio. At his last fight in July at UFC 200, Joe Lauzon stopped him with a quick TKO, the first time he’d ever been finished.

Those are dangerous developments for a career founded on durability—doubly so if you don't have an idea of what the end is supposed to look like. Post-fight, Sanchez gave no indication that retirement had crossed his mind. High off the fumes of victory, why would he? He outlasted Held. He outlasted most everyone else. And he did it without changing much of anything.