Diego Sanchez Heads Back up to Lightweight After Brief Featherweight Adventure 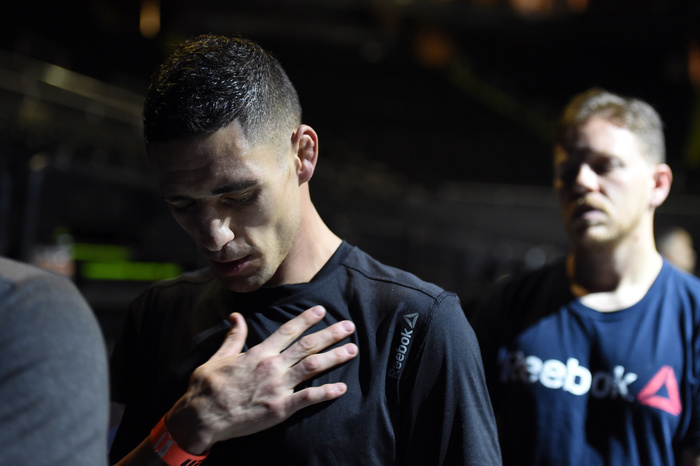 Eyebrows were raised when Diego Sanchez initially announced his decision to fight at the weight division lower than his previous home at lightweight—especially given the UFC’s much-publicized partnership with USADA banning intravenous rehydration following a weight cut.

But, having won the inaugural season of The Ultimate Fighter in the middleweight division before subsequent moves down to welterweight and then lightweight, it was assumed the Jackson-Winklejohn product would have known his limits.

Those aforementioned moves down in weight were due to Sanchez often competing as the smaller fighter against his opponent in each of those divisions. Having made his decision, he shared the inspiration behind his move down to 145 lbs: Sanchez’s former verbal sparring partner in current featherweight champ Conor McGregor.

Talking to FOX Sports ahead of his sole featherweight fight against former title contender Ricardo Lamas, he said: "I've got to thank Conor McGregor for that one. I had never seen a guy his size make 145 lbs and he kind of showed me that the cut is something possible for a guy like me. In my last fight, I didn't feel like the weight cut was that hard and I got to eat a lot and it just seemed realistic. Ten more pounds? That's possible.

“McGregor is a huge 145-pounder with long reach and is taller than his opponents—and that's something that I've always wanted. I always wanted to be the taller, longer fighter so I made the decision.”

However, Sanchez took to Twitter on Tuesday and appeared to attribute his underwhelming decision loss against Lamas to the weight cut being too tough for the New Mexico native.

Since the turn of 2013, Sanchez has compiled a record of 2-4 in the UFC with both victories coming via controversial split decisions against Japanese star Takanori Gomi and brawling Brit Ross Pearson. Despite the losses, Sanchez remains a popular fighter among MMA fans thanks to his uncompromising style of fighting—one which is a far cry from his early wrestling-based attack.

This probably hasn’t been helped with the continual moving up and down in weight over the years. After amassing a solid 7-2 record as an undersized welterweight within the confines of the UFC, he then moved down to lightweight in 2009 to make a play at BJ Penn’s lightweight title.

Having beat Joe Stevenson and Clay Guida by decision, Sanchez finally earned his shot at Penn and held his own against the Hawaiian before succumbing to a TKO loss through a doctor’s stoppage. Sanchez was deemed unable to continue in the fight having suffered a horrific cut above his eye thanks to the shin of Penn. After that, Sanchez returned to the welterweight division before dropping back down to lightweight to really showcase the extent of his weight fluctuation.

The featherweight experiment turned out to be a bit of a nightmare for “The Dream”. But, it appears Diego Sanchez has finally settled on what weight class he should call home within the Octagon.