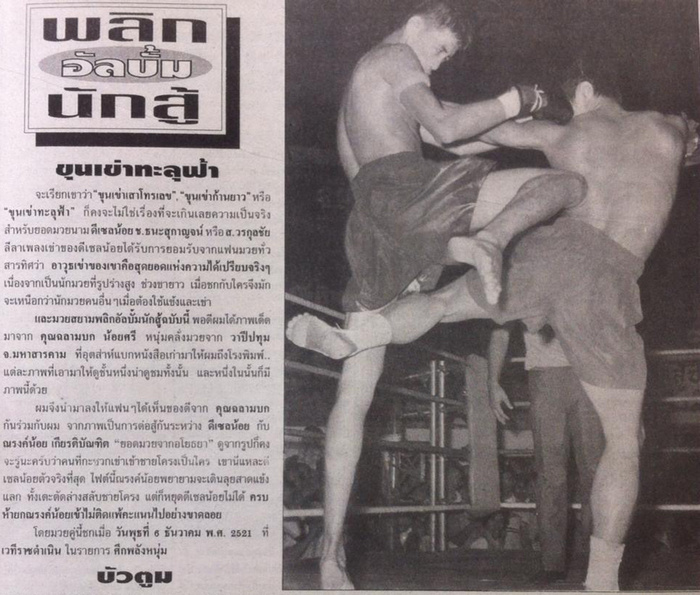 Whenever I go to knee something, a human being, or an inanimate object such as a forlorn, caved-in, leather bag in the corner of a smelly gym, I always think of Dieselnoi and his knees of legend.

With limbs that pierced holes into the sky, no one kicked with the knee quite like Dieselnoi Chor Thanasukarn. He was, and is, the quintessential muay khao (knee fighter) of the eight-limbed art. Born Charin Sorndee, in Thailand's Ayutthaya province in 1961, Dieselnoi, "the little engine," turned pro at the age of 15 and won his first bout on points. He was paid 50 Baht ($1.39) for his efforts.

After switching gym a few times, and slowly working his way up the domestic rankings, Dieselnoi became Lumpini lightweight champion in 1981 after defeating Koapong Sittichuchai for the 135llb title. It proved third time lucky for Dieselnoi. He had fought Kaopong twice before—with one KO a piece for their efforts. In 1982, the reigning champ was matched up against Samart Payakaroon, arguably the greatest Thai boxer of all time, in one of the biggest and highest paid bouts of the 1980s. Samart lost and the knees of Dieselnoi were said to blame.

After that bout with Samart no one wanted to test him. Between 1982 and 1984, Dieselnoi commanded so much fear, and respect, in the lightweight division that he did not have any fights at all. After knee boxing his way to victory against the legendary body snatcher Sakad Petchyindee in June 1984 (who had beat Dieselnoi in two previous encounters), and unable to find any more domestic contenders, he took the show on the road and fought the likes of Japanese kickboxer Shogu Shimazo, Canadian karate champ Peter Cunningham and the American John Moncayo. He knocked the stuffing out of every one of them with knees galore. With a sudden absence of dancing partners, "the little diesel" retired at the grand old age of 25 as an undefeated Lumpini 135llb champ, and 140llb international champ, with a record of 122 fights, 110 wins (40 KO's), 10 losses and 2 draws.

Knees of doom or Muay Thai bullshit? Take your pick, but it's a wise policy to settle for the former. The knees of Dieselnoi were the most brutal in "the golden age of Muay Thai." He was, in short, to the knee what Samart was to the teep front kick—a ring assassin with a well-known weapon of mass destruction from which, early warning system or not, there was simply no escape. Not that you would know to look at, not that you would ever think. Despite his more than average height, Dieselnoi was the quintessential Thai. Skinny. Unassuming. Soft spoken. Not much to look at. More fool you. He was the tall geek—the one who mugged the muscle bound egotists of the fight game blind in the clinch with devastating, ferocious knees.

Last century, a mere blip in time's arrow, Dieselnoi and his knees of legend were a fuzzy, worn out, pirate videotape passed around the higher echelons of the gym. Thankfully, nowadays, many of these vintage bouts are archived on YouTube (and the like) for martial artists, irrespective of rank or style, to look and learn from. Take the above master class of the nuclear powered muay khao working the pads down at the gym. It's simply a joy to behold. Gaze in wonder at Dieselnoi, in his beanpole prime, thrashing the holder like an opponent on a hot sweaty night in a Bangkok stadium. He throws a dozen to your pusillanimous brace. After looking at footage like this, you can only draw one conclusion: you've got to up the knees. You've got to have the confidence to box with them. Just like Dieselnoi in the good old days.

To reiterate, from the high and mighty pulpit, you got to work them knees like a can-can dancer, daddy-o. It's part of the art, part and parcel of being a nak muay (Thai kickboxer). That's what makes Muay Thai different and that's what makes Muay Thai the art of the knee more so than any other martial art on planet earth. So look at the grainy old vids from back in the day, over and over, again and again, and pirate those moves for your own game. It makes for variety and that adds spice to the life of any fighter, be they nak muay or MMA.

But what of Dieselnoi himself, what's the old fella doing these days in quiet retirement? Now aged 54 and content with his lot in portly middle age, he's the divorced father of three grown up kids; and sometime trainer, helping up-and-coming fighters, from all over the world, sharpen up their fighting weapons.

A devout Buddhist, who once booked into a monastery to become a monk ("it is a very beautiful experience in a man's life," he once said), the little diesel loves the simple life and doesn't miss the argy-bargy of the fight game one itty-bitty bit. Despite the sheer volume of fights now going on in the professional Muay Thai game, much like Samart, he perceives an underlying lack of competitive spirit. "Today, for me," he recently said, "there are no strong fighters like before. It's not the same thing. It changed... because of the promoters. It's just not the same any more."

The past was a glorious country. The promoters are messing things up in the soggy present. It's a familiar yarn from the old time nak muay: things were better back then in the halcyon days of yore! But were they, really? Maybe the quality of knee fighting was better. Yeah, it was great when the likes of Dieselnoi were kneeing the shit out of game assed fighters (both domestic and foreign). The good old days in "the golden age of Muay Thai" may have been "better," relatively speaking, but there's no time like the present. I'm off to the local gym to go and work my knees.

The Legend of Buriram: The Scarlet Pimpernel of Muay Thai