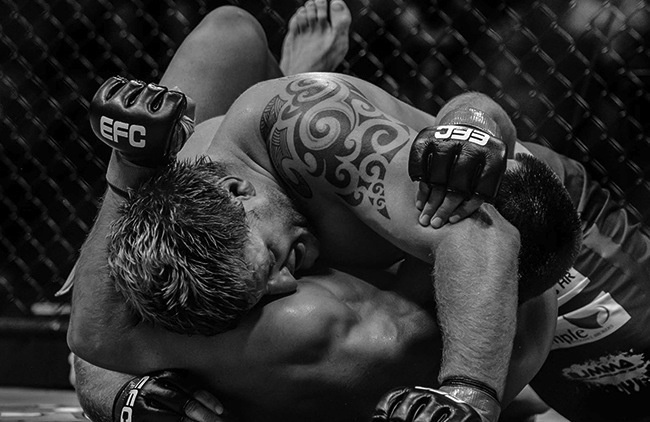 It’s Tuesday, November 19, 2013. We’re inside the cavern of the empty Coca-Cola Dome arena in Johannesburg, South Africa. A small shoot with EFC Africa heavyweight champion Andrew van Zyl and challenger Ruan Potts has been arranged for 2pm. We’re waiting. We’re three weeks out from the event. It’s all routine.

Andrew arrives, officially the baddest man on the African continent. He’s his normal, lumbering self, suddenly appearing on his own steam even though I’d placed someone outside to greet him and bring him in. He’s got his easy-going, Andrew grin on his face, his champions’ belt on his shoulder. He fought Ruan for the first time here. This is where he experienced the first loss of his MMA career. His only loss.

We chat a little. I outline what we’re going to be doing. The plan is to do a quick interview with Andrew on his own, one with Ruan on his own, then a setup where they’re on camera together, talking about their memories of this place. Andrew says that’s cool. I ask him if he minds talking with Ruan. He says that’s cool.

Ruan arrives, with him his wife and 6-year-old son. He pauses when he sees Andrew. Nine months ago Ruan fought Andrew for the second time. He was heavyweight champion then, the most dominant Africa had seen, undefeated in all of his career. Andrew gave him a five-round, sprawling war, cut Ruan, gave him a misshapen face by the end of it, ground him out of it to finally take the decision, the belt, redemption, and revenge. Ruan went from unbeatable to another challenger in the pool. He lost out on prize money, he lost standing, he lost. Now he’s worked his way back through the ranks.

Shane “The Duke” Wellington, our Hexagon announcer, was meant to do the interviews. We get a call. He’s saying there’s a family emergency: A relative has passed away and he can’t make it. We thank him, send our sympathies. It’s suggested that I do the interview. I’m not usually in front of the camera. I feel like I’m not dressed for it.

I start with Andrew, take him aside and question him. We talk about what it means to come back here, where he lost to Ruan, and what it took for him to rebuild himself to face him again. I ask him about the pain of losing, the agony of self-doubt, what it takes to push through. His answers are standard, light, the normal sport talk. All the while Ruan and his wife are close by, his son playing with a toy on the ground. When Andrew’s done he has a chat with the boy, playing a little too.

I interview Ruan. I quiz him on what it felt like when Andrew beat him, his experience of losing his hold on the fight, losing control of his opponent, for the first time in his life.
“Losing was the best thing that could have happened to me,” he says. He’s positive, light--the old “statesman-powering-through-the-rebuilding” speech, saying the words that keep the camera happy, doing the routine. I push for more, trying to get a real sense of it, but he’s not going there.

Later we move on to the interview with the two of them together.  Ruby the videographer’s up high on a balcony, getting the shot of the two men in the big emptiness, getting a sense of a silence as loud as 10000 screaming fans with them in the middle of it. I’m there too, wondering how this is going to be.

“What did you think of the Drotschie fight?” says Andrew, referring to the light heavyweight title fight of the event before. He’s looking intently at me as he speaks and as I answer, he doesn’t take his eyes off mine.

“I expected more from Brendon,” says Ruan. He’s talking about a heavyweight fight from that same night. He talks quickly so there’s not even a sliver of silence. I turn to look at him. “Do you think he was healthy?” he asks.  Again, there’s eyes locked on mine, all the way through the question and all the way through the answer. There’s no time to look away, no time to catch a glimpse of his opponent standing just behind me.

“That’s it,” shouts Ruby from up top. He’s already scrambling down. Both of them look at him, then both look at me, and both keep firing questions, one after the other. They’re civil, calm, relaxed, but there’s no silence.

I ask if they have anything to say to each other. It’s tongue in cheek, meant to be a little funny, the humour hopefully highlighting the reality of these two going all out in three weeks’ time. Ruan’s got a line he likes.

“My parents taught me sharing is caring,” he says with a small smile. “Andrew, I want my belt back.”

“It’s in the deep end,” says Andrew, his voice catching as he says it, a small frog in the throat. “Come and get it.”

The shot ends with a stare down. They stand for a moment, watching each other as the camera rolls. I watch them.

After both of the men have left and we’re packing our small pile of gear. I’m thinking back on the last hour and realising I know nothing about this game. Over that time, with no one watching, with no expectations from anyone on anyone, they said nothing to each other apart from “how are you?” To an outsider they may have been strangers, polite but uninterested. But they’re not strangers. For the last three years each has been both the other’s nightmare and dream.  They’ve spent a total of 26 minutes in the Hexagon together. They’ve seen all the emotions anyone can reeling through the other’s eyes. They’ve bled on each other. In a way they know each other better than anyone else. Better than their friends, their wives, their parents. No camera could capture the scenes they’ve seen, adrenaline rushing, lungs burning. But they don’t talk.

Maybe they’ll talk after the fight, maybe in a few years when all of this is finally over.