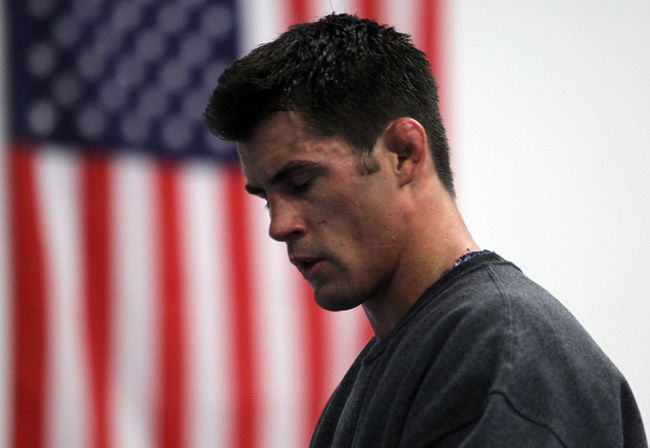 Dominick Cruz made a spectacular return to the UFC’s Octagon in September of this year, punching Takeya Mizugaki to a knockout just a minute a minute into their fight. He’d shown skeptics everywhere that he continued being the same dominant fighter we had grown to cherish.

Cruz, who was once the UFC Bantamweight Champion of the World, ruptured his anterior cruciate ligament (ACL), marking the third time this injury has questioned his professional career. This time, it happened on his right knee. Reaching out to his fans via social media, the 29-year-old fighter announced, to his great sadness, that he does not have a planned timeline set for yet another return to the Octagon.

It is with great sadness to report I have experienced another ACL injury. This time it’s in the right knee, opposite side of my first and second ACL injuries. Leading up to my last fight in September and after, I have practiced a very careful and methodical training and diet regime to keep my body healthy. Unfortunately, this is beyond my understanding and control. I don’t have a timetable for my return but trust and know I will pour my heart and soul into returning to the Octagon.

The Mexican-American fighter has, over the past years, been considered one of the best and most dominant fighters in the sport, currently still on a streak of 11 wins, including his last fight, but which also touts triumphs over Demetrious Johnson, Joseph Benavides Ian McCall and Urijah Faber. His highly anticipated return this year generated huge expectations for fans, analysts and Cruz himself, slating for the future a possible encounter with the skillful TJ Dillashaw, current champion of the division. However, injury continues to riddle Dominick Cruz, and as such we have not had the opportunity to see him develop fully as a fighter and an athlete.

There aren’t any more details surrounding the situation, but it’s a sad situation to be in going into the Holidays. He signed off his  announce with the following words:

I want to thank the UFC, my fans and my sponsors ahead of time for your support and prayers. I appreciate you more than you could understand. I don’t have any other facts to share right now. I, along with my camp, respectfully request privacy at this difficult time. Thank You.

Cruz’s third knee injury is just the last and probably most heartbreaking case in a wicked year for injuries. He joins Cain Velasquez, Carlos Condit, John Dodson and many more in MMA’s injury waiting room.