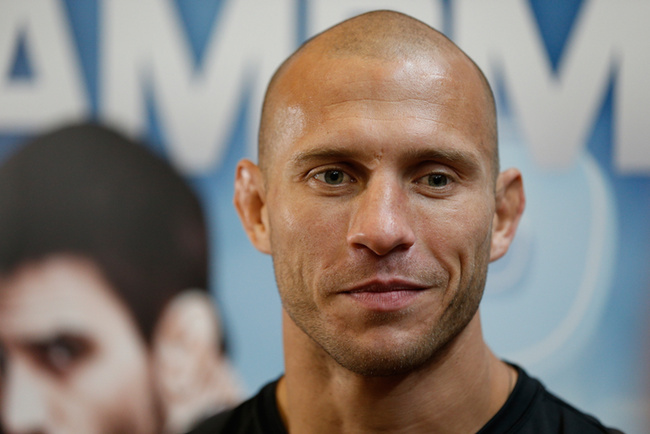 When Donald “Cowboy” Cerrone and Anthony “Showtime” Pettis faced each other in January of 2013, the result wasn’t controversial or debatable. That night, for all his immense talent, Cerrone found himself on the receiving end of a sound beating that left little desire for a rematch between the two. After a first-round kick to the body, Cowboy was down for the count. It appeared as though Pettis was the better man, and that’s where the Cerrone-Pettis storyline would end.

Then, in August 2013, Pettis took the UFC lightweight title from Benson Henderson. With that honor, he suddenly had a target on his back. Every lightweight on the roster wanted a piece of the dynamic striker, simply for the chance to nab the gold around his waist. From the din, several promising challengers emerged in Rafael Dos Anjos, Khabib Nurmagomedov, Gilbert Melendez, and, as fate would have it, Donald Cerrone.

Despite the one-sidedness and brevity of their first encounter, Cowboy vs. Pettis II might not be out of the question. Their first fight left no need for a rematch, but a rematch is getting harder and harder to argue because Pettis has the belt, and Donald Cerrone has had a better 2014 than just about anyone. Really, if it weren’t for the brilliant, welterweight title-clinching Cinderella story of Robbie Lawler, Cowboy would be a shoo-in for Fighter of the Year. Let’s revisit his tremendous 2014.

After ending 2013 with a November trouncing of Evan Dunham, he rang in the year with a blistering head kick knockout of Adriano Martins in January. Three months later, he tapped out Edson Barboza, who is now a contender himself, in the first round. Three months after that, he separated perennial top-tenner Jim Miller from his consciousness. Finally, Cerrone saw his fourth bout of the year in September when he spoiled the debut of former Bellator lightweight champ, Eddie Alvarez. So, while Pettis vs. Cerrone II isn’t a fight people have been clamoring for, it might soon be the one we get—simply because Cerrone deserves a title shot, and Pettis is the man with the title.

Of course, this hypothetical rematch depends on a few things. First, Pettis would have to hang on to his belt until the time for Cerrone’s shot arrives. That, in all likelihood, means he’ll have to defeat the surging Rafael Dos Anjos—a tall order, no doubt, but definitely something the champ is capable of. Pettis vs. Cerrone II, however, also hinges on Cerrone succeeding in his next challenge. A high-implication scrap with undefeated contender Myles Jury at UFC 182 on January 3rd.

Jury’s name might not carry the weight of recent Cerrone opponents like Alvarez or Barboza, but don’t let that fool you. He’s as tough a challenge for Cowboy as anyone. With a 15-0 record that includes a plethora of knockouts and submissions, and wins over game veterans like Diego Sanchez and Takanori Gomi, Jury is on a tear. He may only be 26, but he’s shown very little in the way weakness, and looks like a force to be reckoned with. Cerrone will have his hands full. Don’t be surprised if the young gun snipes him.

That said, if Cerrone does win (as the odds suggest he will), his hard work and packed 2014 schedule might just culminate with the ultimate reward: a UFC title shot. Granted, it could be against Dos Anjos—whom Cerrone has also already lost to—but if Showtime’s December triumph over Gilbert Melendez is any indication, he’ll be holding on to the belt for some time. He may just be forced to duel with Cowboy again.

Can Cerrone come out on top in this hypothetical rematch with Anthony Pettis? Tough to say. We’ve seen comparable scenarios in the fight game before. When Cain Velasquez lost his heavyweight title to Junior Dos Santos in 2011, he went on to destroy Antonio “Bigfoot” Silva in a non-title bout. Months later, Velasquez had won back the heavyweight title, and Bigfoot had made a case for a heavyweight title shot. Thus, despite the one-sidedness of their first encounter, the pair rematched for the title. Unfortunately for Bigfoot, the second result was almost identical to the first: another first round TKO.

Will the pattern be the same if Cerrone and Pettis fight for a second time? In all likelihood, yes. The lightweight champion is unendingly dangerous in all facets of the game, to the point that even a gunslinger like Cowboy would be pegged as a major dog against him.

That said, Cowboy has looked like a juggernaut over the last 12 months. He has flattened every obstacle in his way, and looks to continue the trend against Myles Jury at UFC 182. So, while it’s unlikely that he beats Pettis the second time around, Donald Cerrone is precisely the kind of fighter who could prove us all wrong. He may just swipe the belt yet.

The Connoisseur's Guide to UFC 178