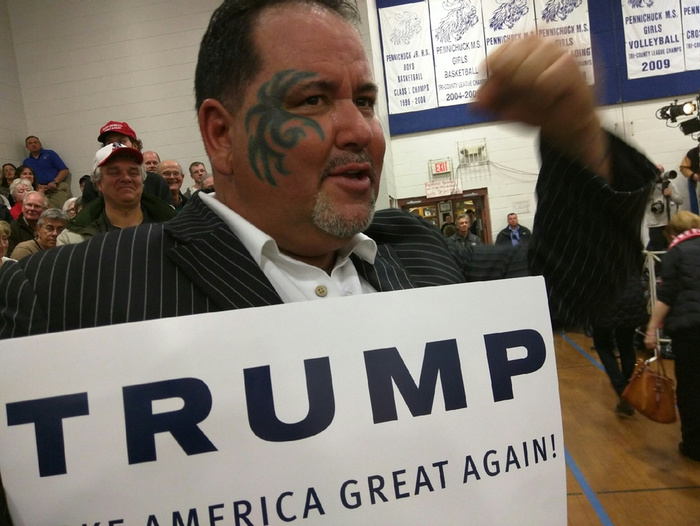 During a recent Donald Trump campaign rally in New Hampshire, a voice cried out from the back of the room a word that has hounded the presidential candidate for months: Fascist! Cameras pulled back from Trump and into the crowd to reveal a tall, thin, young guy with long blonde hair standing there amid the faithful, a liberal straight out of central casting. And barreling straight for him through the throng was a huge man in a pinstripe suit, balding and angry, sporting a Mike Tyson-style tribal tattoo on the right side of his face. This man, Todd Poulton, reached the protestor before security guards could and threw him to the ground in a rage, knocking over an elderly man in the process. Soon the protestor was being escorted out of the middle school gymnasium by sanctioned security to the triumphant cheers (led by Trump) of USA! USA!, and Todd Poulton was walking right into the open arms of the American media.

“I did not body-slam the kid, I did not throw a punch, nor did I pounce,” Poulton told The Daily Beast when he arrived there. “We were all standing while Mr. Trump was speaking, and I heard a lot of chaos coming from behind me. And, of course, in my field you’re always trained to react to stuff like that. The screaming started … and I reacted out of the safety of others and grabbed him and contained him.” How one long-haired American shouting in a middle-school gymnasium could lead to chaos or threaten the safety of others remains, at this point, a metaphysical question.

Poulton’s “field” is celebrity boxing. At 45-years-old, the unemployed Pittsfield, Massachusetts, native made his professional boxing debut at a Celebrity Fight Night event against someone named Chris George, winning by TKO in the second round. Since then “The Punisher” has fought former professional baseball player Jose Canseco and former professional wrestler Brutus “The Barber” Beefcake. He was even scheduled to fight Lindsay Lohan’s father, Michael, in 2010, but Lohan failed his pre-fight physical and had to be rushed to the hospital with chest pains, sparing America, at least momentarily, one more step in its descent into complete cultural absurdity. 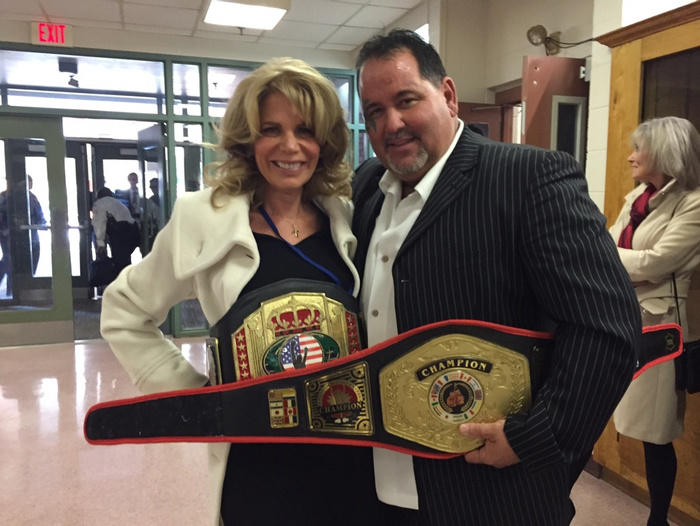 These days Poulton is no longer boxing professionally. Long plagued by Obsessive Compulsive Disorder, he is currently living on disability and advocating for the mentally ill. He also has a tattoo on his right arm of George Bush, under which are written the words “Not on my watch.” Poulton has apparently decided to make it his mission to live by those words and, on a strictly volunteer basis, as yet unaffiliated with the official workings of the Trump campaign, make sure no one gets between the American people and the man they so desperately need to be hearing from in these dark days. Not on his watch.

“I like [Trump’s] firmness, he’s very firm up there,” Poulton said. “You listen to these other people out there, they’re low-energy… As a fighter, you prepare yourself for the fight. He prepares himself like a fighter.”

A good point, Punisher, but not nearly paranoid enough.

“What draws me to [him] is his strength on business … but what good is money unless your money is safe?” Poulton wondered. “We have great Muslims in our country, but we also have bad Muslims in our country … There’s always a bad guy out there. And I believe it’s time we do a little more checking into the background of people before they cross the border. … We have to stop illegal immigration… Half of Americans aren’t getting jobs, [yet] all the Mexicans are getting jobs.” Be honest: With the country suffering a plague of overemployed Mexicans and with “bad” Muslims mixing in with the good in our very own hamlets and towns, can we really fault Todd Poulton for violently subduing a man who was interrupting Donald Trump?

Considering the levels of passion the Trump campaign has inspired, in both supporters and detractors alike, passion that has resulted in numerous protestors being set upon at rallies by security guards both actual and self-professed (one incident, you may recall, ended with a black protestor being subdued while a Trump supporter cried out for security to “light the motherfucker on fire”), we shouldn’t be surprised at the sudden appearance of a Todd Poulton, Celebrity-Boxer-Turned-Volunteer-Protector-of-Celebrity-Turned-Presidential-Candidate. Or of an Anthony “Stallone” Pantella, also a boxer and professional wrestler and a friend of Poulton’s who applauded his friend’s unilateral approach to stifling dissent and who said he’d also gladly offer his services as a “celebrity bodyguard” to Trump. 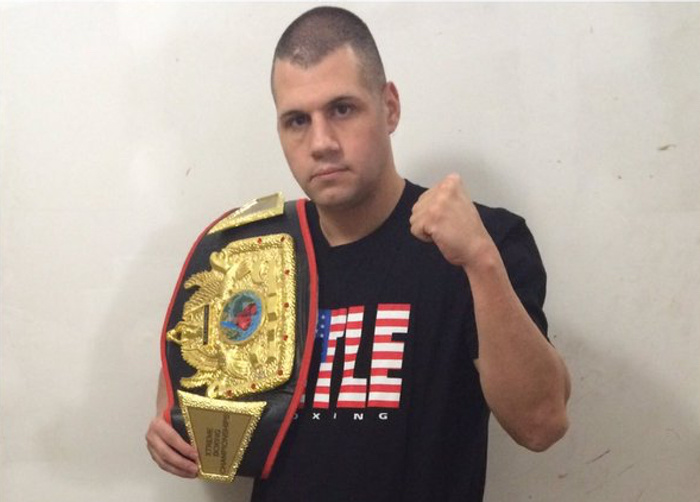 In an email to the Daily Beast, Pantella, a New Jersey native who refers to himself as the “nephew of Rocky Balboa,” said Poulton was right to tackle the agitator, despite the nearby presence of professional security and police (this is a movement of the people, after all), and that the protestor got what he deserved because “them kind of people don’t know how to act.”

“If you don’t like Trump then don’t go to the rallies,” Pantella wrote, advocating for a new kind of hyper-polite, disengaged political activism. “They are for people who support not haters…People can say whatever they want but if you get out of line and talk smack about Trump then stuff happens like you saw [The Punisher] put on that dude.”

Asked if he would have reacted the same, Pantella said he would have gone further and given the protestor something called “Fists 2 Faces.”

“I would of told him to go pound salt and if he touched me then he would have a problem,” Pantella said. “He looked like a female and I don’t hit women.”

Well, at least there’s that.

Donald Trump, Lady Gaga, and Others Kick Ronda Rousey While She's Down