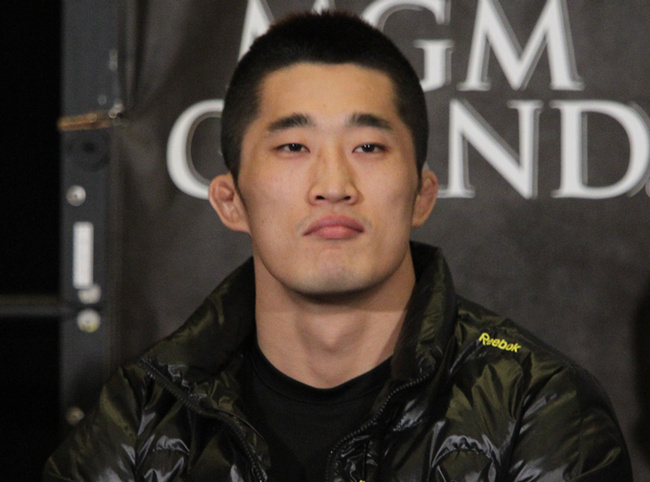 Of all the potential fates for an MMA fighter, there is perhaps no worse outcome than being labelled “boring.” Diego Sanchez may wade directly into his opponent’s attack and risk severe head trauma but at least he is exciting. It is a sentiment nearly as old as it is bad for your frontal lobe.

At the outset of Dong Hyun Kim’s career in the UFC, his style was described with every other possible euphemism. For the most part, he did not give us the kind of finishes that put him on the map in the Japanese circuit, especially against stiff competition.  Rather, he “held opponents down” and “frustrated the attack” of Matt Brown, Amir Sadollah and Nate Diaz. All dazzling strikers who—faced with the superior wrestling and judo skills of Kim—could not quite put anything together on the feet.

It is a narrative that stretches back to the beginnings of the UFC: a talented grappler against a dangerous striker. But with the advent of rounds and weight classes the plot arc has changed significantly. For the former the intelligent approach is of course, not to engage on the feet, but to use technique to keep the fight in familiar territory and look for a decision win.

Few if any had been so undiplomatic as to openly call Kim a boring fighter. After all, this was a large part of welterweight champion George St Pierre’s strategy for years. As the sport has developed so too have the sensibilities of fans and it is not unheard of for spectators to now cheer a skillfully executed guard pass.

But as Jake Shields can probably attest, one day you are a world class grappler whose abilities have neutralized the top contenders in your division, the next day you are put out to pasture.

So the UFC continued to feed its technical grapplers the division’s monsters and see what would happen. For Dong Hyun Kim it was something miraculous—he ceased to be “boring.” Or perhaps more accurately, he became more confident in his striking. But the initial process of transformation was less than clear.

When he knocked out Erick Silva with an overhand left, the outcome could have been interpreted as a fluke. Silva was then one of the divisions rising stars, and his own explosive momentum carried him directly in to Kim’s punch.

So again, the UFC matched Dong Hyun Kim with another promising young standout. With wins over Diego Sanchez and Rick story, John Hathaway was a legitimate threat well positioned to advance within the division. But the Kim we saw that night looked less like the judo expert we were familiar with, and more like the Diaz brothers’ long lost Korean cousin.

Tyron Woodley is an accomplished wrestler who has probably never been called boring. But in his fight with Jake Shields, it seemed like he couldn’t quite manage to pull the trigger. One frequently made criticism of Woodley is that he is simply too muscular for the division. When unable to secure a big explosive first round finish—in his last fight against the smaller Rory Macdonald, as with Shields—he tends to flounder.

For Dong Hyun Kim though his striking seems to have improved dramatically, the intelligent approach is clearly to try and grapple with Woodley. But if he can weather the initial storm of Tyron Woodley and look for a finish in the latter rounds, it would show he truly belongs in a division composed of animals. Maybe this brand of intelligent grappler, whose strategic approach is augmented with a capacity to finish in devastating fashion, is the heir to GSP’s throne we have waited for.

Jack Slack: The Stun Gun vs. the Hitman