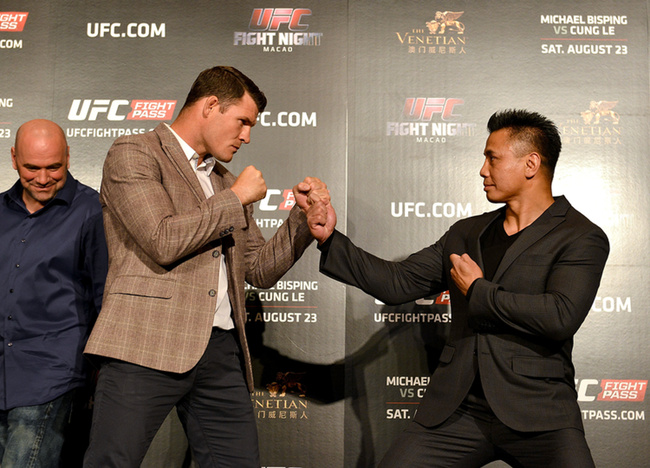 The UFC is back on August 23 with a Fight Night event at the Venetian Sands Casino, featuring a headliner bout between Michael Bisping and Cung Le. This is the latest attempt by the UFC to gain some market share in Asia, where a half dozen fight promotions are battling it out for the dominant spot. The UFC has not claimed the top spot out here by any means, so this Macao event is a big deal for Mark Fischer and company. A couple exciting fights, maybe a knockout from a local favorite, and things can look very good for future UFC events in Asia.

But at first glance, this card looks pretty underwhelming. The Chinese fighters are the best of the best in their country right now, but barely any one of them is recognized in their own country (with one notable exception that I’ll get to later). A couple TUF: Nations participants join several unknowns to round out the bottom of the card. Several of the bouts involve two fighters each coming off of a debut loss.

You can’t compare cards like this with the Cerrone - Miller card, the Dublin event, or Lawler - Brown. Totally different animal. This is the UFC investing in an emerging market. This is the chef digging through his fridge and throwing together a meal that might just surprise everybody.

For fans with little clue about the China MMA scene, that surprise might lie in the Tyrone Woodley - Dong Hyun Kim fight. Both fighters are on the rise and both have excellent, diverse striking abilities. The winner will be in line for a title shot, the loser will be knocked back down into the pit.

A similar fate awaits Michael Bisping if he loses this fight against Cung Le. He’s been on a skid recently, and he looked lost against Tim Kennedy in his last bout. Bisping still has the attitude and confidence, but if he wants to remain the name everyone mentions when discussing British MMA fighters, he has to perform well on the 23rd. 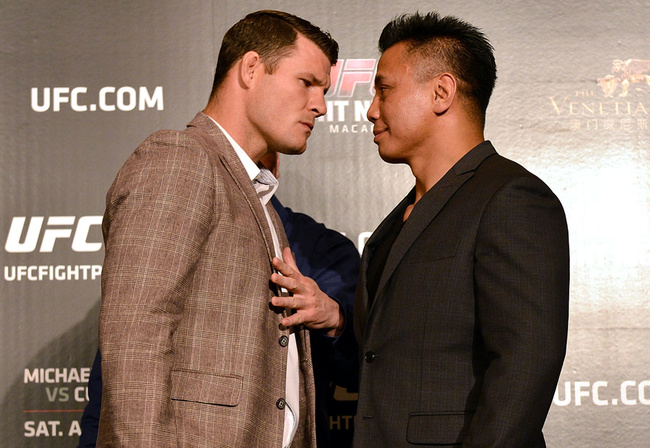 Cung Le hasn’t fought in the Octagon since he knocked out Rich Franklin in Macao last year. That victory put him on the map for a lot of fans, gave everyone an introduction to Sanshou/Sanda, the Chinese combat sport, and probably played a role in Le being the coach for TUF: China. If he can replicate that great win against a very similar opponent, then the UFC will have to think up something else for Le besides a fight every time they roll through Macao.

Chinese fans respect Cung Le, but trying to pass him off as the “China fighter” is like having an Englishman with a Canadian mom as an American soccer ambassador. No one’s really buying it.

Which brings us to the meta-reason for this card: making that big time China money. The main card features two big fights for Chinese fans, Zhang Lipeng vs. Brendan O’Reilly and Ning Guangyou vs. Yang Jianping.

You’d think the Zhang Lipeng fight would be the one the Chinese fans have their eyes on, but that’s not necessarily the case. Lipeng is one of the fastest improving fighters in China MMA today. He has a great camp with a lot of diverse coaches helping him out, and his resurgence in the last few years after being cut from his Sanda team has given him the heart to be a champ. But outside of hard core China MMA fans, no one in this country can identify with him. He’s Chinese, and he’s fighting a foreigner, and that’s as much as any street level Chinese fan knows, or cares about. If he wins, it will definitely be a boon for MMA in China, and the UFC might start trying to build up the Lipeng train.

But the fight that matters for the Chinese fan is Ning Guangyou vs. Yang Jianping. This is a fight that brings together pretty much everything the average Chinese person loves and hates about his own country. These two guys couldn’t be more different. Ning Guangyou has an elementary education, comes from the sticks, worked odd jobs as a driver, and his hilarious Henan accent marks him as a working class stiff. Yang Jianping is an underwear model, famous fighter for the biggest domestic fight promotion, and the man wears make-up ringside when giving commentary.

Guangyou is the 99%, Jianping the 1% and in a nation with a wealth gap like China’s (GINI coefficient of at least .47), all eyes will be on this fight. 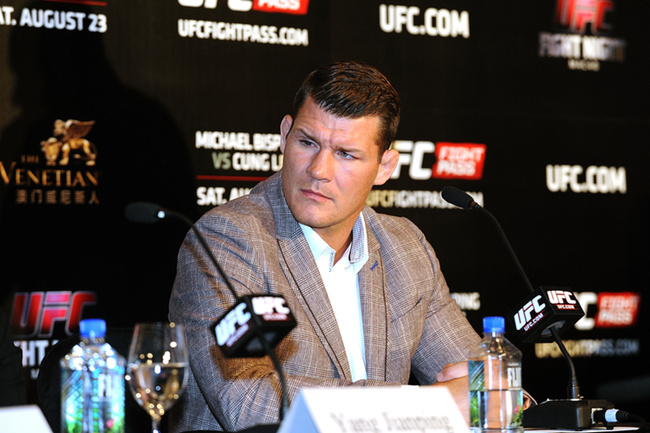 The undercard, although stuffed with unknowns for the average fan, is not to be sneered at. The Wang Sai - Danny Mitchell fight is going to be entertaining. Mitchell has three black belts in kickboxing, taekwondo, and judo. I really can’t wait to see what the Cheesecake Assassin does with those three black belts against Wang Sai, a guy with nary a belt to his name, but tons of heart and an ogre right hand. Wang Sai probably won that fight against Zhang Lipeng last March, the in the TUF: China finale, and he wants to prove that he is the “big brother” of the Chinese UFC fighters right now. He’ll come out hard, with improved skills on the ground and better striking.

All of the Chinese fighters have spent most of their time training in Phuket with Top Team and a few other gyms. They are a proud bunch and feel that they should be winning. Jumabieke Tuerxun’s heartbreaking loss to Leandro Issa a few weeks ago has been a hard lesson for the Chinese fighting in Macao August 23rd. The Chinese don’t have their own Conner MacGregor talking about “dominating” and calling guys out, but they definitely are here to take part. This card is the first event for them, in many ways, because there are no debut jitters, they’ve had time to learn how different it is up at this level, and they have the chance to do something big... we’ll see how they do.

I’m getting excited now. The Macao card is a big deal.

For all of the guys who fell during TUF, who never made it out of Asia, who finally have a chance to display some NCAA skills, this is the biggest event of their lives. For vets like Roland Delorme, who gave Alex Caceres a run for his money, now wallowing in a two-fight skid, this is a chance to right the ship. His opponent Yuta Sasaki just wants to be more than a blacked out face on the UFC website.

For the UFC, it’s a total win win. No matter what happens, the cream will rise to the top, a Chinese fighter will definitely win at least one bout, and everyone gets to party in Macao for a week.