Dos Anjos vs. Ferguson: No Such Thing as Retreat 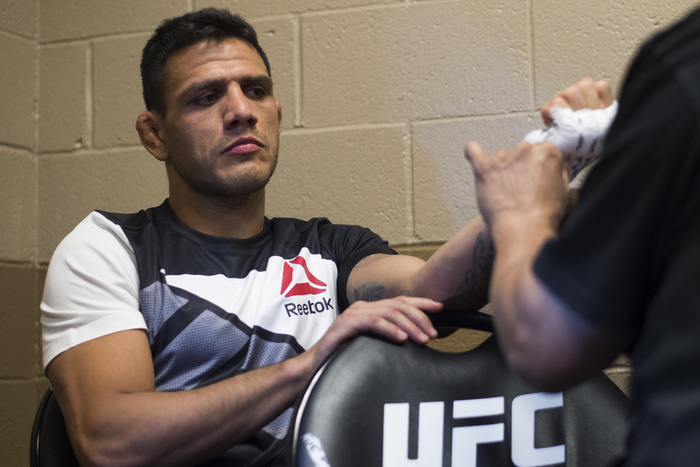 The depth of the lightweight division can make it difficult for a fighter to keep his head above water. Only at one hundred and forty five pounds can a fighter go from being considered perhaps the best lightweight to ever compete to an also ran in a few months. Just ask Anthony Pettis about that one. The latest victim is Rafael dos Anjos. Having blasted Ben Henderson, battered Anthony Pettis, and smoked Donald Cerrone from 2014 to 2015, Dos Anjos was looking like the man to rule the lightweight division for years to come. Then Eddie Alvarez stepped up to bat and hit Dos Anjos' head for six. A momentary miscalculation, a forearm just shy of the path of a right hook, and the finest pressure fighter in the game was sent stumbling.

But this weekend Rafael dos Anjos jumps right back into the mix of things with a bout against Tony Ferguson, who is on an eight-fight winning streak and who provides a fascinating match up for the former champion. Rafael dos Anjos versus Eddie Alvarez was intriguing because it was the division's most smothering and methodical pressure fighter against a fighter who did his best work hitting hard and circling the cage, polar opposites in style but each an expert in that craft. Ferguson and Dos Anjos is a compelling match up because the fighters are in principle quite similar but in practice completely different. Both are 'pressure fighters' but where Dos Anjos is the patient and methodical pressure fighter, Ferguson is a swarming ball of energy. One man wants to push the pace and force the opponent to work harder than him, the other drags the pace up on his own and forces the opponent to try and keep up.

A perfect example of the kind of pressure Ferguson brings is his bout with Edson Barboza. Barboza is a tremendous kicker and so the traditional anti-kicking strategies are key against him—staying too close, or too far away to kick at all times. Ferguson didn't care for staying too far away and so stormed across the ring and got in Barboza's face from the opening bell. Through constant aggression, Ferguson was able to get to work hurting Barboza before the methodical, polished outfighter could get his eye in, his feet set and begin to put together the set ups for his strikes. The same was true against Josh Thomson, who Ferguson walked down, battering with front kicks to the body and cutting open with slashing elbows over three frantic rounds, during which Thomson wilted under the constant activity.

Rafael dos Anjos is a pressure fighter in the more classical mold, pressure being what happens between exchanges and a product of the threat of punches. Where Ferguson is all action, a lot of what Dos Anjos does is build anticipation of action and force hurried, sloppy strikes out of his opponents. Dos Anjos is far more concerned with ring craft and his positioning than Ferguson. In any Ferguson fight you will see him lunge past his opponent onto the fence and then simply turn around and get back to walking forwards. Rafael dos Anjos' back is rarely to the fence, and he scarcely retreats past the center of the Octagon. Dos Anjos is about putting his opponent near the fence and forcing them to move, to run, to lash out at him clumsily. When they do he gets down behind his shoulders, throws back blows, and ducks in on their hips whenever their hands are away from their guard long enough. If all they do is circle he'll pound them with his left high kick, cut them off with his right hook, dig in the long body shots and overhands, and wait for them to fight back. Moving forward but fighting on the counter, one of the most difficult styles of boxing to learn but the one which might be responsible for the most high level stoppages because of the fearsome pace it puts on the opponent, its punishing of every minor opening.

One of the interesting points of the match up is Ferguson's tendency to give up cage position, rushing his opponent to the fence and then running straight past them and placing himself in inferior cage position. The question has always been how will this work out against a) a smothering wrestler who will pin him to the fence in such situations (such as in that long awaited Khabib Nurmagomedov matchup), or b) a quality ring general who will move in and either pound him or trap him against the fence when he does this. Fans focus on the strange granby rolls and spinning attacks when they refer to Ferguson's adventurous / wild side and how it might get him into trouble, but against the elite it is more likely to be this complete disregard of cage position which gets him into trouble.

Ferguson's length and accuracy has always been one of his great merits, even if his punching form can be a little unorthodox. Dos Anjos' had little difficulty slipping and shoulder rolling Anthony Pettis' straight punches, it was the infighting counter punches of Eddie Alvarez such as the right hook to the body followed by a left hook upstairs, or the slipping right hook to the chin which gave him trouble rather than the linear shots. While it is absolutely fine at range, Ferguson's low non-punching hand could be problematic against a fighter with solid head movement and shoulder positioning who looks to crowd him.

However, the value that Ferguson places on elbow strikes could be significant against Dos Anjos. A pressure fighter like Dos Anjos can take a cracking punch and roll with punches well. We discussed the value of elbows and the danger of loading up on punches when we were examining Ronda Rousey back in Killing the Queen. The thing about a good punch is that as soon as it has landed, if it doesn't faze the opponent, they are right on top of you. Elbows are a little different though – the knockout is not needed when you are quite happy simply cutting the opponent. Everyone becomes a lot less difficult to hit when they have blood obscuring their vision in one eye.

One linear attack which gave Dos Anjos very obvious trouble, however, was the front snap kick of Donald Cerrone which went largely unanswered and seemed to upset Dos Anjos through their first bout. The same kick which Ferguson used to wind Josh Thomson so severely.

When put on the receiving end of Dos Anjos' ring cutting, it is unclear what to expect from Ferguson. That is often the case due to the very low level of ringcraft in mixed martial arts generally. But even if Ferguson's circling and direction changing isn't on the Dominick Cruz/Eddie Alvarez level of discipline, he could benefit from pounding in some of his short, powerful low kicks as they have shown to take Dos Anjos out of his long stance momentarily and give his opponents a chance to run.

Perhaps wisest decisions that Ferguson has made for this fight are firstly to build a training camp completely around his own preparation, and secondly to recruit the help of Eddie Bravo and some of his top students in that camp. Against Danny Castillo, Ferguson had some trouble getting stuck on his back but in recent years his guard has looked more and more offensive. He's not submitting guys with triangle chokes and armbars, but he's threatening enough that he can usually get out of bottom position. While Dos Anjos loves to beat people up on the feet, once he has a takedown he will remain in top position until the end of the round if he can. Dos Anjos had great success stifling the traditional guards of Nate Diaz and Anthony Pettis, perhaps Ferguson's active elbows and rubber guard game can allow him to do some damage from within the guard without getting stalled out and beaten up as the aforementioned guard players were.

When two fighters meet wanting exactly the same thing—in this case for their opponent to retreat and tire—you can be in for the bloodiest kind of fight. Neither man will step away from his A game and will battle for every inch until one grinds to a slight advantage and begins to push it. The surprises in such stylistic matchups often come when two fighters meet wanting seemingly the same thing, and one reveals that he has spent his training camp planning something altogether different. Something completely out of the ordinary. If the opponent has been training for a meet-in-the-middle war, and the other fighter turns up dancing and giving ground, it can seemingly give the first fighter what he wanted but throw him into panic. Whether Ferguson versus Dos Anjos will be a bloody and guts war, a grinding battle in the guard, or a surprise outfighting clinic, it has all the makings of one of the best fights of the year. If it can live up to even half the expectations we are in for a treat.