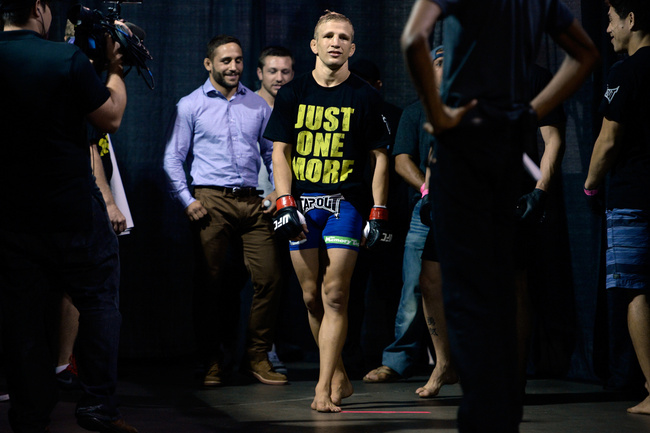 Despite the odds being stacked against it, UFC 177 turned out to be a pretty decent night of fights.

The day before the hotly anticipated rematch between Renan Barao and T.J. Dillashaw, Barao was forced to pull out of the bout due to an injury sustained from a fall, andfor the second time in as many UFC pay-per-views, the main event was in jeopardy.

I want to note here just how much I dislike the switching of a fighter's opponent the night before a fight. It was not fair on T.J. Dillashaw to expect him to take on a completely different but still notably dangerous opponent at the last minute, and it was not fair on Joe Soto to ask him to step into a five round fight when he had trained for a three round fight—against the best bantamweight in the world no less.

They should have both said no—certainly a coach does not want his fighter's courage in heat-of-the-moment negotiations to put his career path in jeopardy—but luckily for us, Soto and Dillashaw agreed to fight, and the scrap that they put on saved the event.

T.J. Dillashaw was the heavy favourite, for obvious reasons, but it is worth noting that a last minute change of opponents, especially to a relatively unknown one, is always disadvantageous for the champion. There is a reason that months are spent working towards fights at the highest level, and it's not because it takes that long to build cardio or get the right lines in a fighter's six pack for the bout.

At this level of the game, tape is studied, sparring is specific, and gameplans are tailored to the habits of the scheduled opponent. A change of opponentmakes all of the specific training a fighter has done pretty ineffectual. It's like if you painstakingly put together a presentation and about three slides in your spectators stopped you and moved straight into Q and A... on something which wasn't even anything to do with the presentation.

Dillashaw might be one of the finest offensive strikers in mixed martial arts today. Through stance shifts and level changes, Dillashaw puts together flurries which keep his opponent guessing. When they duck, he nails them with an uppercut or knee, when they stand up straight, he kicks their leg out or darts around them. He's just very clever with his offensive work and well worth studying in that capacity.

Throughout the bout, Dillashaw's usual angles in footwork were on display, and they are lovely to watch. When you move to a dominant angle—whether it be major or minor, inside or outside—you change the angles that your usual strikes come in from and their chances of landing.

Here Dillashaw performs a nice V-step to an inside angle. Moving to the back side—what Edwin Haislet calls “outside position”, limits the opponent's offence—moving to the inside angle takes a fighter into his opponent's right hand, but opens up more offensive options. Notice the nice front snap kick on the end of the combination—something we're seeing more and more from young fighters.

Rather than the darting in and out which proved so effective against Barao, Dillashaw often stood in front of Soto, backhanding him with four or five jabs to keep his guard up and head down, then looked for a big punch. As a result, Dillashaw got hit more often than when he was fighting an in-and-out fight against Barao, but he still out-landed and out-powered Sato at every turn.

Something we can't avoid discussing is Dillashaw's shifting. Shifting is the act of stepping with a punch and it can be done a great many ways. Alistair Overeem steps with a left uppercut/jab hybrid, Robert Fitzsimmons' famous 'Fitzsimmons Shift' was a stepping left hook to the body, Mauricio Rua's stepping left hook to the head is brutal, and Ray Sefo is a master of stepping with right handed punches. For shifts using the lead hand (which becomes a rear handed punch while stepping) I use the term “cheat punch”, but there are obviously shifts which don't involve the left hand at all.


Here is Alistair Overeem, in a video I made a long while ago, demonstrating his shift or 'cheat punch'.

We saw all sorts of shifts from Dillashaw, but chief among them was the Drop Shift. This was—reportedly, we don't have a lot of footage—the favourite trick punch of the great Benny Leonard. Rather than simply stepping with the right foot as you throw the left hand, the feet are switched with left landing first, behind the fighter, and providing the drive—as in a good switch kick.

The effect is to take you into a southpaw stance, with your foot outside of the opponents—a dominant angle which makes it very hard for him to reply.

A very short, quick gif of the drop shift in action. Notice how, though Dillashaw falls short on this occasion, it takes him to an angle and opens up possibilities.

Early in the first, Dillashaw flowed it into a kick, which was caught, and then showed his stopping power by dropping Soto while standing on one leg. Because catching a leg is seen as so advantageous, fighters often forget that there are plenty of men out there who can hurt while standing on one leg. John Wayne Parr was famously dropped by Yodsanklai Fairtex while the latter was on one leg, and Benson Henderson has done some tremendous hitting while hopping backwards with one leg in his opponent's hand.

The worst thing you can possibly do in fight journalism, however, is make one fighter out to be invincible. Every fighter has their methods, and every method works best against some strategies and works poorly against others. Dillashaw's stance shifting, like flyweight champion, Demetrious Johnson's, is brilliant because it makes his strikes so hard to predict. On the other hand, both he and Johnson shift stances so frequently that they often lose the stability that the idea of stance was developed to secure.

If you get hit while your feet are underneath you or switching, the blow can fail to hurt you, but your balance will have you tripping all over yourself. It happened to Demetrious Johnson a couple of times against John Dodson, and the same thing happened when Dillashaw met Dodson. And, of course, throwing yourself into a charge provides extra momentum to any collision that takes place as you come in. Ramsey Nijem experienced this earlier in the night—which is a shame, because the weave under the first counterpunch was beautiful.

Dillashaw's performance against Soto was sublime, especially given the last minute change of opponents, but there are hints of this danger which show up occasionally. Note in this instance that Dillashaw shifts but comes in straight and a slight blow, which didn't hurt him, knocked him off balance. Against a fighter who is looking to counter in combinations—even simple ones like Dodson's—that could be a real hazard.

But ultimately, that stance shifting is what makes Dillashaw so great, and it served up a beautiful finish in the fifth round. In truth, as Soto had been training for a three round fight, the smartest thing to do would always have been dragging him into the late rounds. Soto, to his credit, didn't look as exhausted as you would expect with the pace that Dillashaw had put on him.

The finishing combination was sublime. A one-two, into a stance shift, into a shuffle, into a right high kick as Soto circled away.  A perfect example of the threat of changing stances so constantly. Soto thought he was safe as he circled out and dropped his guard, but the change of stances changed the angle on the right leg kick, and Dillashaw was able to meet Soto as he circled away along the cage with a “Matt Brown special”.

Fights to Catch Up On

Bethe Correia versus Shayna Baszler is catching all kinds of flack in the forums because Baszler gassed fairly early and Correia struggled so hard, while landing free, unanswered shots, to finish the fight. It is certainly not sexism to point out that generally, there just aren't as many power punchers in female combat sports. There were some interesting studies posted a while back done into the difference between male and female throwing form with a ball and the difference was largely hip involvement and timings of rotation.

Obviously the studies haven't been done into punching power to check it out, but what you can observe in many female mixed martial artists is a tendency to lean forward at the waist and punch with the arms, or turn the shoulders as the punch is thrown, rather than throwing the shoulder forwards and allowing the punch to follow. It's the difference between the hip and shoulder following the punch, and the hip whipping the shoulder in, which then whips in the fist.

All of that being said, there are plenty of men out there who can't get things done in one punch—and smartly go to volume. Just look at Nick Diaz's best fights, or Michael Bisping's dismantling of Cung Le last week. Frankly, even in the best power punchers you want to see them trying for volume and being pleasantly surprised when their opponent goes down much easier. Correia did exactly what she should have done while Baszler was recovering, and went to the body. You see too many fighters, even big punchers, swing away at the head and once their opponent gets a second wind, the puncher is more tired than the target!

Meanwhile, ONE FC hosted a sixteenth event, where both Shinya Aoki and Ben Askren got it done easily. Askren's desire to finish fights is clearly showing through, and frankly, there is no reason not to let him into the Octagon.

Finally Roger Huerta, who is undeniably in the twilight of his career, showed a beautiful example of Muay Thai on the ground. In ONE FC, knees to the head of a downed opponent are legal, and the beauty and power of Huerta's work shows exactly why they should be.

On Friday we'll be in for a treat when Gegard Mousasi meets Ronaldo 'Jacare' Souza in a rematch of their 2008 meeting for the DREAM Grand Prix title. Come back in the week and we'll tell you everything you need to know about both men.