Dwayne "The Rock" Johnson Signs with the UFC 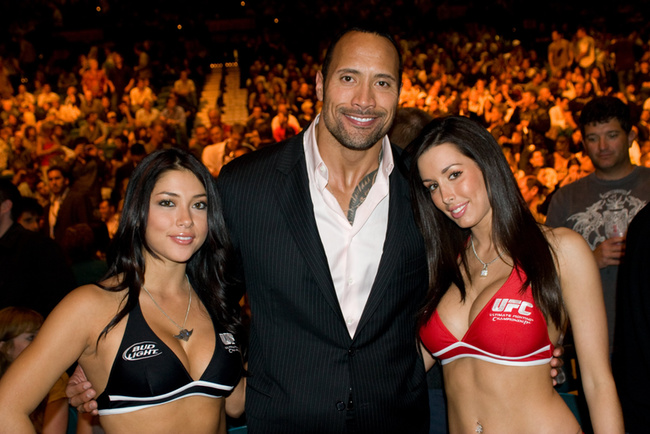 Brock Lesnar may have dashed any hopes of seeing the former heavyweight champ in the UFC again when he signed a new, long-term contract with the WWE last week, but it looks like the UFC has already found an even bigger pro-wrestling star to fill the giant Brock-sized hole in the sport’s heart.

Just three days after pulling UFC women’s bantamweight champion Ronda Rousey into the ring at Wrestlemania—and just two days after suggesting that the pair were cooking something even bigger for next year’s event—Dwayne “The Rock” Johnson has decided to join his Furious 7 co-star in the UFC.

In a press release released earlier today, Johnson confirmed that he has signed a three-fight contract with the UFC and hopes to make his debut as a mixed martial artist within the next calendar year.

“Finally… The Rock has come to the UFC,” Johnson said in the statement. “I’ve always been a big fan of the UFC since I was 19 or 20-years-old, and it’s a dream come true for me to finally have a chance to fight in the Octagon.” He went on to thank Dana White for the opportunity and Rousey for the support.

Johnson has been quite vocal about his love of MMA over the years, but believed he was too old to try to make the transition from pro wrestling to pro fighting.

“If the UFC were as popular as it is today and I had the opportunity to make money in the UFC, if it was as popular back then as it is today, I would have easily done that and gotten involved in MMA,” he told reporters while promoting the film Hercules last summer.

Apparently Rousey was instrumental in convincing the 42-year-old wrestler and action star that he wasn’t past his prime just yet. Using the later-in-life resurgence of her fellow Expendable, Randy “The Natural” Couture as an example, the Rowdy one convinced the People’s Champion to give it a try.

Traditionally, the WWE has not been much of a breeding ground for mixed martial art talent. There’s been crossover between the two worlds for decades now, but that mostly came in the form of MMA fighters like Ken Shamrock and Dan Severn making occasional appearances in the squared circle between MMA fights. That started to change when former WWE Champion and collegiate wrestling sensation Brock Lesnar signed with the UFC in 2007 and dominated the heavyweight division for the rest of the decade. Former collegiate wrestler and WWE star Bobby Lashley has also tried to fight.

This seems to have opened the door for other highly athletic WWE stars. Phillip Brooks, a.k.a. CM Punk, another former WWE champ with many years of martial arts viewing experience, signed with the UFC in late 2014 and is expected to make his professional MMA debut at some point this year. Now it’s The Rock’s turn.

Johnson, who is 6’5”and currently over 260 pounds, is an obvious fit for the heavyweight division. Although he has no previous martial arts experience, he does have a background in football and the most devastating elbow in sports and entertainment. Although no potential opponents are being named just yet, Johnson is ready to take on all comers.

“I’ll take whoever they throw at me,” Johnson said. “I want to work my way up, just like Brock did.”

“After the almost universally positive response we received when we signed CM Punk, it only made sense to pursue more pro wrestling stars,” Dana White told reporters today. When asked about the terms of Johnson’s contract, White would only say that the money involved was in the “millions and millions.”

[This April Fools story was written by Sarah Kurchak.]