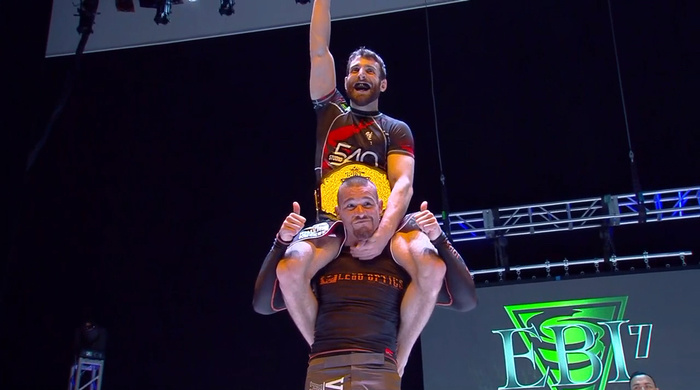 Every fight fan's favorite weed advocate and conspiracy theorist, Eddie Bravo is doing wonderful things for the sport of submission grappling. In fact, the single most entertaining match in the history of Metamoris (EBI's main rival) starred Bravo. Bravo's rules at the Eddie Bravo Invitational make for finishes which is what people want to see in submission only contests. You reach the end of time? A coin is flipped and you take it in turns from a dominant position trying to force the tap before the opponent can escape. It's a manufactured way of getting submissions but it seems to up the intensity in the main match period because fighters don't want to risk suffering a quick, crafty submission in the extension rounds. It certainly seems to be helping, EBI was full of submission finishes while Metamoris events—though containing excellent grapplers—always turn out a majority of draws with only the occasional submission win.

The EBI 7 card was focused around a featherweight tournament. For the long time fan the success of Bill Cooper was one of the most interesting narratives of the event. Cooper had been out of action for a while with injuries and a myriad of issues in his personal life. To see him return to competition of any kind with a clear head was a treat, to see him excel was a bonus. Through the course of the tournament Cooper showed the flowing, baiting, deceptive style of submission hunting which made him famous. For instance, here Cooper counters an omoplata attempt with a heel hook in one of the slickest sequences of the night.

Cooper's semi-final match with Geo Martinez was a thoughtful, flowing affair which demonstrated how the focus on top and bottom becomes less pronounced when grappling with no points and no gi. Cooper would begin passing, allow Martinez to come on top of him, then return to the top to complete a different pass.

Throughout the tournament Martinez was utilizing a threatened kimura to set up a quick switch to a guillotine attempt. When he used the guillotine to take top position on Cooper, Cooper was able to deflect the arm nearest his head and attack with a D'arce choke.

The Diaz Brother of EBI

An interesting response to Martinez's constant sitting up to threaten the kimura was seen from Rafael Domingo, who won a lot of fans by aggressively not giving a damn. When Domingo was in Martinez's guard, he kept pressing forward to show an arm triangle. It's rare that anyone will get this from inside the guard but midway through the bout he hopped forward, took his feet off the floor and kicked his heels as high towards his butt as he could, using the top of his feet to catch Martinez's ankles and open the guard. I have only ever seen this demonstrated in “hmm... not sure about that” catch wrestling videos on YouTube as a contorted reverse version of the old ankle lock when the opponent crosses their feet from back control. Seeing it open Martinez's guard and allow Domingo a quick attempt at a pass was news to me and I'm sure gyms were full of grapplers attempting this on Monday.

Domingo had caught the crowd's eye in the first round of the tournament against Ash Williams, the protagonist of Evil Dead and the youngest black belt in the U.K. Williams had been working submission attempts up and down Domingo and Domingo had been no selling them like the Ultimate Warrior. 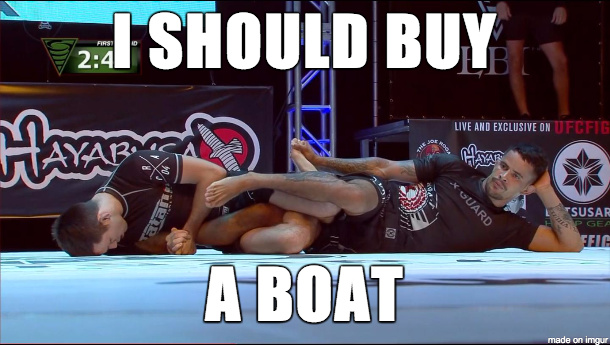 Thanks to reddit's r/bjj for this gem.

As Williams was in the process of attacking a calf slicer / coming up on the back, Domingo dragged his leg free and back flipped over Williams' guard.

One of the weirder parts of the event was during one of the non-tournament matches between two thirteen year old girls. Cora Sek and Zoey Chiles put on a great display of skill in their match but they also answered the question of “can an adorable teenage girl get a crowd to turn on her?” After grimacing during a leg entanglement, Chiles took a turn for the nasty. First came this jumping knee into knee slice pass.

Then an attempted heel hook which was illegal in the rules under which the girls were fighting, but is a bit more understandable in the pressure of the moment.

Then a completely unforgivable right hand on the chin, and proceeding to knee ride Sek's face while the referee apparently cautioned her in a way which could do nothing to encourage improved behavior.

Truly bizarre stuff and hopefully something that the people around Chiles don't encourage because were it not for those moments of extremely poor sportsmanship this bout would have been remembered for the top-notch ability of the two youngsters.

The final of the featherweight tournament was between Bill Cooper and the reigning EBI featherweight champion, Eddie Cummings. Cummings is known for his razor sharp heel hook game and his proficiency with the two-on-one from seated guard. Cummings' first opponent came out with the interesting idea of lying flat so that Cummings could not get underneath him and ensnare a leg. Unfortunately this just allowed Cummings to use the two-on-one grips to take the back.

In two different bouts in the tournament Cummings was able to trap one of his opponent's arms from the back and pin it behind them as he searched for the choke. The old B.J. Penn / Marcelo Garcia strategy of covering their hands with one hand of your own and one leg, leaving one hand free to attack the undefended neck. From there it's just a case of getting the chin up by driving the forearm in under the nose or trying to sneak it in down the jawline. With less stringent rules in place in MMA, Penn himself used to like using his free hand to smother the opponent's mouth.

Getting the hand under the chin can be a grueling process and EBI 6 veterans will remember Gordan Ryan slicing Yuri Simoes' lips up on his teeth which left Simoes fighting off the choke and suffering a body triangle while swallowing blood. At EBI 7 Cummings managed to make his man look like a pretzel, inserting his trapping leg as a hook across their back.

Cummings and Cooper met in the final and Cummings was able to snap on one of his heel hooks and quick up the quick tap. While the final was a little underwhelming the performance of both men through the tournament was splendid.

And whenever we talk about grappling we have to catch up with Garry Tonon who is still so hot right now. Tonon brought the star power to Metamoris 7 (because the advertised Roger Gracie vs Buchecha II didn't come to fruition). Ralek Gracie provided the other half of the main event. A decent match with a slick finish as Tonon entangled a leg, Gracie crossed his other leg over it and Tonon attacked the top leg with a toe hold.

As Gracie kicked free and rolled, Tonon snapped on a fast kneebar behind his armpit on the other leg. At the time many missed what the actual submission was because the transition happened so fast. Another grappling event, another slick submission by Garry Tonon.

If you are at a loose end this week and have the chance, catch up on EBI and Metamoris. Submissions or no submissions, there is normally at least one cool move or transition in each match which you can steal and apply with mixed results at your next training session. I know that I'm a jumping heels-to-butt closed guard breaker now, that's my game.

Why Garry Tonon Is the Most Exciting Man In Grappling