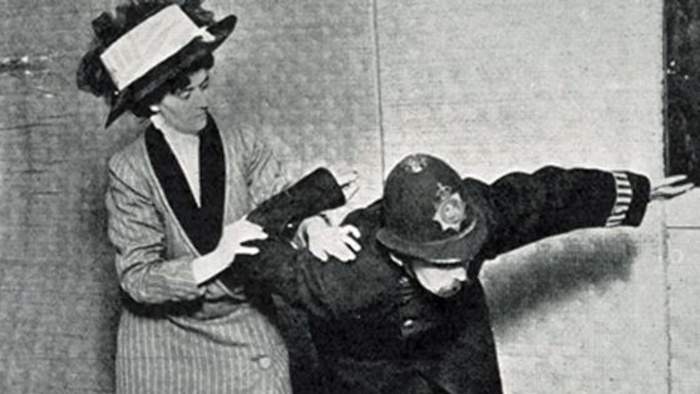 Officially, Edith Garrud is not a character in the forthcoming film about the British suffragette movement named, appropriately, Suffragette. But the activist, self-defense proponent and trainer of Emmeline Pankhurst’s 25-woman strong Bodyguard collective is certainly there in spirit.

Helena Bonham Carter, who plays Edith Ellyn in the film, lobbied for her fictionalized character’s name to be changed to pay tribute to her. “Originally the character I was asked [to play] was somebody called Caroline, and then I found out about this character called Edith [Margaret] Garrud, who was 4'11" and taught the suffragettes jiu jitsu—basically self-defense—against the police,” the actress told Interview Magazine in August. “I based a lot of this character on Edith, but having said that, for story reasons, a lot of the jiu-jitsu has been cut. But no, I didn't feel pressure, because no one knows about her anyway. She's a real inspiration and I thought an amazing story; this woman who is literally 5'1" or even 4'11" and could defend herself against these men twice her weight and twice her size. One of the big arguments against women getting the vote, which was such a stupid one, was that they couldn't fight for their country. They can fight.” 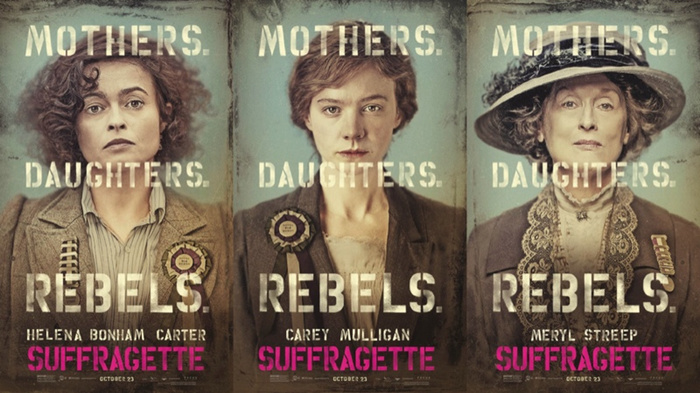 Garrud can also be found in a lot of Suffragette-inspired media. She’s one of the women profiled in the recent BBC News Magazine article “Suffrajitsu: How the suffragettes fought back using martial arts.” She’s also makes a brief appearance in Suffrajitsu, a trilogy of graphic novels inspired by the jiu jitsu-trained women who protected the leaders of the movement from the police and public, which is receiving newfound interest thanks to the film.

The interest is understandable. Edith Garrud’s life and involvement are so fascinating that they could easily merit a biopic of their own. While she wasn’t the first woman to practice jiu jitsu in England—self defense parties among the more privileged women in the country were already quite popular by the time she arrived on the scene—she was the first to officially bring martial arts to the suffragette movement. 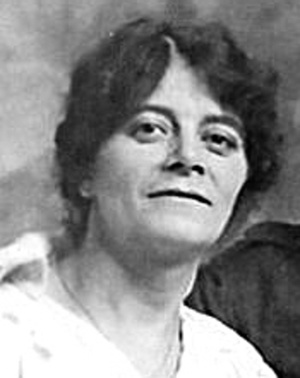 Born in Somerset in 1872, Garrud first discovered jiu jitsu when she and her husband, a gymnastics, boxing and wrestling instructor named William, took a class with Bartitsu founder Edward William Barton-Wright. From there, the pair began to study the art under Sadakazu Uyenishi, one of the first Japanese instructors to teach the art outside of Japan.

When Uyenishi returned to Japan in 1908, William and Edith took over instruction duties at his dojo, Golden Square, which was located in the posh Soho area of London. The pair became associated with the suffragette movement when the Women’s Social and Political Union booked them for a jiu jitsu demonstration. When William fell ill, Edith went to the meeting alone.

“Edith normally did the demonstrating, while William did the speaking,” Suffrajitsu writer Tony Wolf told the BBC. “But the story goes that the WSPU’s leader, Emmeline Pankhurst, encouraged Edith to do the talking for once, which she did.” 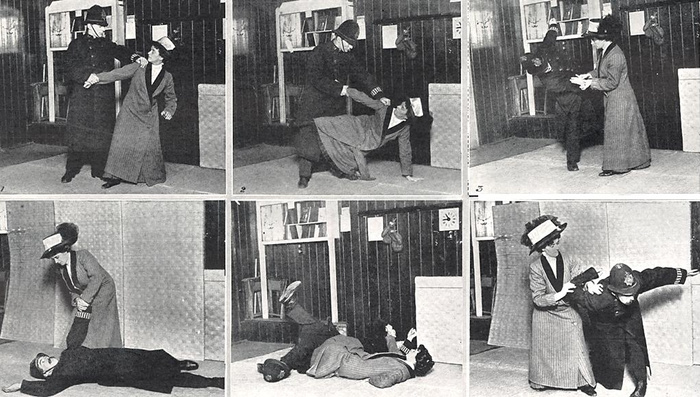 After that, Edith began to hold self-defense classes for suffragettes, teaching them how to deal with hecklers at their protests at a dance school on Argyll Street. When those protests began to face increasingly violent opposition from the police, though, she began to teach them how to fight back.

According to her great nephew Martin Williams, Garrud sometimes used Uyenishi’s former dojo as a hiding place for her fellow female activists. “She didn’t want ­people to know Golden Square was a dojo, so she was very pleased to have it in the posh end of town because people were less likely to suspect,” Williams told the Islington Tribune in 2012. “The suffragettes would create a disturbance in Oxford Street, but then they’d run back to the dojo and hide their clubs and bats under the floor. By the time the police arrived they’d be pretending they were in the middle of their exercise class.”

The tiny but mighty Garrud also appeared in films about jiu jitsu, wrote articles on the topic, and gave demonstrations at a number of meetings for the suffragettes, and would take on any curious man who doubted her skills. She was also immortalized in a Punch magazine cartoon as “The Suffragette That Knew Jiu-Jitsu.”

When a Canadian-born activist named Gertrude Harding began to assemble a team of women to protect Emmeline Pankhurst from re-arrest under the infamous Prisoners (Temporary Discharge for Ill-Health) Act of 1913—better known as “The Cat and Mouse Act”—Garrud became their instructor, helping the women learn the skills that they would need to fight back against much larger—and armed—police officers and opportunistic male bystanders.

Armed with their jiu jitsu training, Indian clubs (and whatever else they could get their hands on, like flower pots), and protected by homemade armor made out of cotton and cardboard, these women—who became known as the Bodyguard—defended Pankhurst through a mix of skill and distraction until their disbandment shortly after the beginning of World War I.

Edith and William continued to teach martial arts until they sold their dojo and retired in 1925. Although she mostly retired from public life as well, she did sit down with journalist Godfrey Winn for an interview in 1965, on the event of her 94th birthday. She even put the writer in a wrist hold for old time’s sake. Edith held on for another five years after that, passing away at the age of 99 in 1971.

For more information on Garrud, we recommend checking out the following sources:

Edith Garrud: The Suffragette Who Knew Jujutsu
Before Tony Wolf tackled the Suffrajitsu graphic novels, he wrote this book on Garrud. It’s geared toward teen audiences, but contains valuable information for all ages. A free download is available from the Online Library here.

Femininity, Crime and Self-Defense in Victorian Literature and Society
Emelyne Godfrey offers a detailed, nuanced and thoughtful exploration of Edith Garrud and her role in the suffragette movement in her examination of the role that self-defense for women played in the Victorian era.

Damsel vs Desperado
“Woman is exposed to many perils nowadays, because so many who call themselves men are not worthy of that exalted title, and it is her duty to learn how to defend herself, because ju-jutsu has over and over again been proved to be the most effective means, in moments of emergency for repelling the attack of a ruffian; because it is easy to learn, and because it is, quite apart from its combative value, a splendid exercise; it is the very thing for women as well as men to take up thoroughly.” - Edith Garrud herself writes about self-defense and suffragettes in this 1910 article for Health & Strength.

The Year of the Bodyguard
The Bartitsu Society provides an in-depth summary of a 1982 documentary on Pankhurt’s Garrud-trained posse.

Ju-Jutsu as a husband-Tamer: A Suffragette Play With a Moral
A photo series based on “What Every Woman Ought To Know,” a sketch that the suffragettes practiced and staged at Garrud’s Argyll Street dojo.