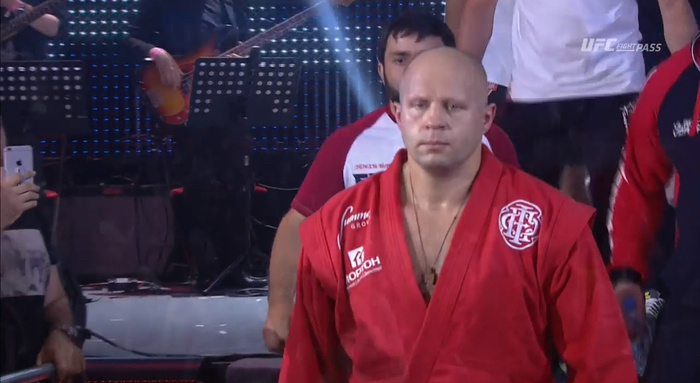 The second card of this weekend's six-event MMA Marathon came courtesy of Eurasia Fight Nights (EFN). The 15-fight card, which emanated from historic Saint Petersburg, Russia, was broadcast from beginning to end on UFC Fight Pass.

It was a wild one.

Elsewhere on the card, we were treated to a ridiculous 10 first-round finishes, though many of these can be attributed to the massive skill disparities that marred many matchups. And finally, there was the almost gaudy amount of spectacle that filled the space between fights: Cirque du Soleil acrobatics, pyrotechnics, a live orchestra, performances from Russian rappers and pop stars, and a giant inflatable spider—for some reason.

Scroll down for a rundown on the main and co-main events, and quick results for the card's remaining 13 fights.

Back in December, heavyweight legend Fedor Emelianenko made a successful return to competition against an extremely outmatched Jaideep Singh. At EFN 50, the 39-year-old Russian's comeback continued as he took on former UFC light heavyweight Fabio Maldonado. The fight was expected to be a blowout for the Russian great. In the end, however, it was not.

Round one saw Maldonado survive an early onslaught from the Russian, only to turn the tables by sending his foe careening to the mat in a dazed heap. From there, the Brazilian poured on the punishment, pushing a bloodied Fedor to the very brink of consciousness, as the Russian crowd fell silent. Through a blend of lionheartedness and referee bias, however, Fedor survived till the end of the first round and retreated to the safety of his corner.

From there, Fedor surprised by regaining his wits and forcing a fairly significant momentum swing as Maldonado slowed to near motionlessness. The last two rounds of the fight, then, saw the Russian pour it on in several wild spurts of offense, while the slow-moving Brazilian seemed to survive solely on the strength of his head movement and granite chin.

In the end, Fedor's effort in the second half of the fight would earn him a debatable majority decision victory. That said, Fedor's being nearly snuffed by Maldonado—who is far from a power puncher—proves that his comeback is not meant to last. No longer able to take any real punishment, the legendary heavyweight is clearly well past his prime. Now 35-4 overall, calls for his long-awaited UFC debut are likely to get a whole lot quieter.

In defeat, Maldonado will return to Brazil with a 22-10 overall record. He hasn't tasted victory since a TKO win over Hans Stringer in October 2014.

The Co-Main Event: Minakov Taps Graham in the First

The co-main event of the evening saw former Bellator champion Vitaly Minakov put his perfect, 17-0 record on the line against Australian kickboxing export Peter Graham. The towering Russian made it look easy.

Grounding his foe in the first minute of the fight, Minakov quickly climbed into full mount, threatened with some ground and pound, before rolling into position for a first-round armbar victory.

With this submission win—the 10th on his record— the former Bellator champion sits at an incredible 18-0. In addition to Graham, he's taken out game opposition in Josh Copeland, Geronimo Dos Santos, Cheick Kongo and Alexander Volkov, and continues to reaffirm his rep as the best heavyweight outside the UFC. Graham, meanwhile, returns to the loss column after a win over Mariusz Pudzianowski last October. The Australian is now a tough 11-10 overall. He'll have to make his next win count if he hopes to stay above the .500 mark.