Elements of Style: The Double Attack 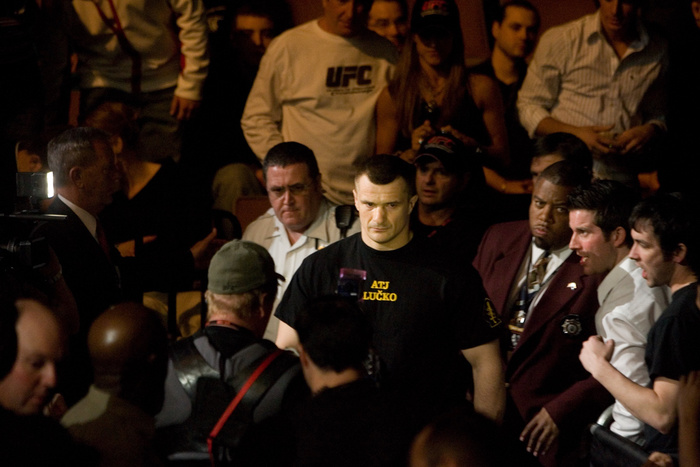 It can help to think of fighting as a relationship between two parties. There is a great case to be made for a fighter ‘imposing his will’ on his opponents, but many of the slicker strikers and grapplers in the world make their big connections, counters, transitions and submissions in moments of distraction that they have manufactured in their opponent and have practiced a hundred times before. Misdirection is the most important point of fighting. Be it grappling or striking, fencing with a foil or even fighting on Gladiators with oversized Q-tips. The easiest way to make the connections that matter is to convince the opponent that they are going to be aimed somewhere else. Put quite simply, the pillars of creating a good fighter are: strength and conditioning, smoke and mirrors.

The double attack is not a particularly nuanced idea. There are many far more cunning ways to land strikes on the feet or advance position on the ground, a double attack is one of the simplest. It can take some speed and some force to apply a double attack well but then the idea of technique is to best apply the physical attributes a fighter does have, not completely remove the requirements for them.

It doesn’t get particularly complicated: a double attack is simply two attacks which share some of the same telegraphing, but which target different points or have different paths. To use one of the most famous examples in mixed martial arts history let us consider Mirko ‘Cro Cop’ Filipovic’s left high kick and left straight. Cro Cop didn’t do much work on the counter, didn’t throw combinations or set ups, what he did was pick away at opponents with lightning sharp left straights and look to throw up the left high kick. The left high kick was the peculiar part of the equation, no one was every as famous for it as Cro Cop, so opponents came out to fight him with their right hand high and wide, ready to absorb the kick even if they couldn’t see it coming.

But with the right hand high and wide, fighters were susceptible to the wickedly fast left straight which Cro Cop slotted through the middle. As soon as the right hand started to creep in to parry these right straights, up came the left high kick again.

Or as soon as the opponent began to dip his head to the elbow side of the left straight, the left high kick caught him leaning.

What separates a double attack from much slowly building offence is that the double attack is about standalone hitting. It is not about nudging an opponent and slowly building up combinations and set ups, it is about hitting hard right off the bat and saying to the opponent ‘you can do something about this, or I will hit you with it until you fall down’ and being able to honestly continue doing so if their guard never changes. Most importantly, each strike benefits from the other. The adaptations a fighter makes to defend one strike opens him to the other, and each time he adjusts he is at a 50/50 chance of eating a strike in an unguarded place.

A double attack can be something of a brute force strategy because if it extends to strikes beyond the jab it can rely on hitting hard and fast each time, where a more long term striking strategy might call for variety of blows, set ups and varying degrees of speed and power. The most important point is that the paired techniques start out similarly enough that the opponent is given a difficult task discerning the intended target. Cro Cop’s left kick and left straight were thrown so fast in his prime that his opponent would see Filipovic’s shoulders twitch and if they were in range they effectively had a 50% chance of getting hit with a power blow.

The reason Cro Cop was used in the above example was because his was one of the most pronounced double attacks in MMA history. We sometimes refer to it as ‘the old southpaw double attack’, but in an open guard engagement the rear leg round kick and rear straight will always pair up wonderfully. David Teymur showed less striking variety than Lando Vannata, but effectively used just a few tools and an understanding of Vannata’s reactions to land the sterner blows.

Add in the body kick and baby, you’ve got a triple attack going.

Luke Rockhold and Vitor Belfort both made full use of the body kick to set up high kicks and vice versa against Michael Bisping. Belfort’s left straight was far more of a threat than Rockhold’s, but both men were able to bring Bisping’s hands down and set up a high kick which brought about the end of the fight.

A double attack can be made out of almost anything if the strike is thrown with authority and has consequences. Glory light heavyweight, Zack Mwekassa leaps forward with a piston-like jab which has dropped numerous heavyweights. When the opponent’s right hand starts coming in to palm or parry it, he’ll leap forward projecting his lead shoulder again, but whip his left hand around in an arcing left hook instead.

Right handed double attacks are less effective against decently skilled boxers, but they still find a place in mixed martial arts. Urijah Faber threw wide overhands any time he got close enough, but as soon as his opponent began ducking he would look to throw the right uppercut from out wide. Sergei Kharitonov used a level change to throw right hooks to the body, and then would begin to change level and instead throw a right hook across the top to wobble his opponents.

Another brilliant kicking double attack is the front kick to the body and the round kick to the head. Bringing the kicks up in the same way and then turning over the high kick in the Brazilian kick or mach mawashigeri or question mark style. Two very different applications of this same principle can be seen in Glaube Feitosa and Semmy Schilt. Schilt gouged with the step up front snap kick then would surprise with a quick flick of the kick towards the head. Feitosa would stomp the opponent backwards with a front leg push kick, then when the high kick came he would turn it over to the point where he was almost kicking downwards.

Superfoot Bill Wallace had one of the most famous double or triple attacks in martial arts history. All of his offence came off his lead leg in the form of three kicks—the side kick, the round kick, and the hook kick—which all chambered with the knee right in front of him. Discerning one from the other, amid the pace of a gruelling fight, was incredibly difficult for Wallace’s opponents and he could throw up dozens of kicks a round.

Double attacks are everywhere in combat sports and while some fighters like Wallace and Cro Cop can carve whole careers out of them, almost every fighter has one or two that they use with regularity. Simple question and answer pairings, misdirection to land a few good points. They aren’t the pinnacle of striking method, they aren’t primitive brawling, they are the meeting point of natural ability and fighting science and they are most certainly a staple of the martial arts.

Rockhold versus Werdum: The Moneyweight Fight You Didn't Know You Wanted

A Real Yokozuna: The Vindication of Kisenosato