Elevation Sickness: The Real Opponent At This Weekend's UFC 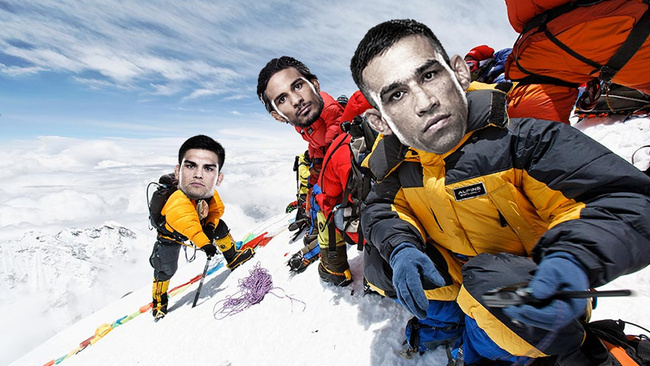 Sports and gambling go hand in hand. Even the UFC now lists the betting odds under each fighter’s name during Bruce Buffer’s introductions. For me, that’s old hat. Growing up in Vegas, I remember playing at a friend’s house, and from his dad’s office hearing a printer spitting out page after page of data, all from a massive satellite dish in the backyard.

Turns out his dad was a profession gambler. Made his living betting on sports, even won numerous six-figure football pools sponsored by the local casinos. The kid showed me the pages, and how I recall it is something akin to ticker-tape info on the stock-market.

Which is fitting, because a professional gambler—and by professional, I mean someone who exclusively earns a living wagering on sports—must study like a stock analyst. My friend’s dad paid thousands every month for that satellite dish, or more specifically, the breaking information the thing provided: injuries, coaching issues, girlfriend/marital strife, even problems in team practices.

In this way, a professional gambler digs beyond the public prospectus, and only wagers on information the general public doesn’t know. After all, if you want to gamble save the aggravation and play roulette, craps or blackjack. Aside from card counting and heavily varying your bets in twenty-one, these are purely games of chance where the most competent strategy merely reduces the casino’s favorable odds.

But ask any Wall Street veteran, an they’ll tell you, despite the laws against, inside information is the only guarantee to unlocking the vault.

So watching UFC events, I’m always looking for an angle. A few months ago I wrote about the weigh-in game and how inside intel on a bad cut is a sure bet.

This weekend’s card, UFC 180, in Mexico City, offers another such opportunity. Not relating to weigh-ins, but intel relating to the elevation. Most UFC athletes train at sea-level, or close to. But this card takes place at over 7,000 feet. So if you hear about an athlete arriving on fight week, place your bets.

According to Dr. Peter Hackett, head of the Institute for Altitude Medicine, in Telluride, Colorado: ‘For those athletes doing aerobic events over 5,000 feet, 10-20 days of acclimatization at the performing altitude is ideal.’

Which is why Fabricio Werdum has been training in Jiquipilco, Mexico (elevation 8,700 feet) for the past few months. He and his camp, which includes Kevin Gastelum and Dennis Bermudez, make daily runs up to nearly 11,000 feet, so come fight night Mexico City will feel like another day in Southern California.

Orlando Sanchez, Werdum’s training partner who was recently featured winning the Mexico Nationals jiu jitsu tournament in UFC Embedded, broke it down for us: “Soon as I walked up a flight of stairs at the airport I was huffing. The air feels really thin, like it’s cold, even though it’s not. The first sparring session was the worst in my life. After just three minutes I couldn't breath. Just trying to keep my hands up felt like I was being choked out. So the last two minutes of our first round, I just tried to survive. It was horrible, and had nothing to do with mental toughness. Watching new fighters in the gym up here, you can see their body shutting down: their hands slowly drop, then their mouths open wider and wider.”

Quick translation: If a fighter hasn’t properly prepared at elevation, no strategy in the world is going to help.

Dennis Bermudez spent the early portions of his camp training at sea level, while every nightsleeping in a hyperbaric tent that simulated elevation of 9,000 feet. He then spent the last few weeks with Werdum, acclimating his body. “The tent approach worked, because once I got up here and started working, I felt okay, while my coach was more tired holding mitts than I was hitting them. Word on the street is that [opponent, Ricardo Lamas] was training in the gym at half-speed, and he getting tired. But I’ve been here just crushing it, going balls to the wall for thirty minutes. My plan is to get in there and set a super-hard pace, and give him a reason to quit.”

So that’s the angle for making coin on UFC 180. Find out who trained where, and for how long. Because all the strategy, skill and mental fortitude don’t mean shite when your body is starving for oxygen. And if you’re not a gambler, watch each fight and look for signs of altitude fatigue. My bet is at least a handful of fighters didn’t properly prepare.

I Trained With Rafael Cordeiro In Mexico