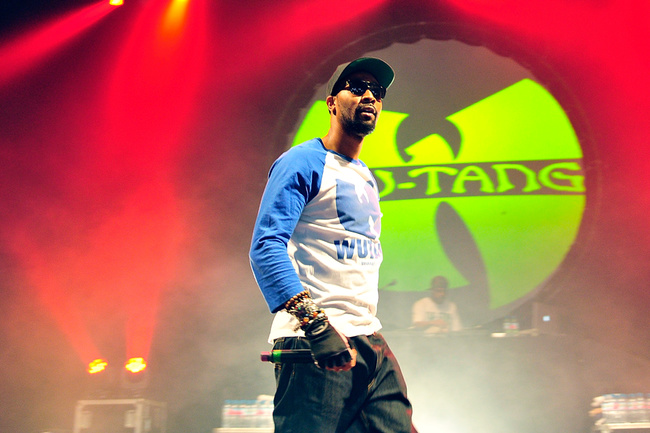 “The Man With The Iron Fists 2,” RZA’s follow-up to his 2011 martial arts film directorial debut, came out on DVD and Blu-ray on Tuesday, and we can’t think of a better way to celebrate than to take a look at the actor, director, and hip hop luminary’s martial arts resume.

The RZA’s lifelong affinity for martial arts culture is well known and well documented. Anyone who’s heard more than a bar of a Wu-Tang Clan’s music knows that the Staten Island collective’s mastermind has a knowledge of kung fu films so expansive and passionate that it could make the most dedicated scholar look like a dilettante.

But it was never just about the films for RZA.

“I got into martial arts by watching movies and falling in love with them and of course trying to imitate and emulate what I saw on the screen. We’d all go buy the magazines and books,” he told Black Belt earlier this month. “First, it was just the action and ability to fight without weapons and stuff like that, but then the spirituality of it resonated with me as a teenager.”

At 11, RZA, also known as Robert Fitzgerald Diggs, got his first taste of hands-on practice. “There was a guy [who] was a brown belt in karate, and I had a buddy named Jose [who] was really good. He’d take us out to Silver Lake Park is Staten Island and show us karate moves and things like that when I was young.”

A decade and a half later, RZA began his martial arts practice in earnest when he met Shi Yan Ming, a 34th generation Shaolin monk who defected to the United States in 1992 and opened a Shaolin Temple in Manhattan.

Shi Yan Ming took an immediate liking to RZA. He was impressed by what the rapper had taught himself, and by his interest in the philosophy as well as the action inherent in  martial arts. “He has dozens [of] martial art moves—many tapes—just like a library. [Also] many different religious books. To him, he is just learning the philosophy. Where ever you come from he respects. He respects all: Christian, Buddhist, Taoist – all the different religions,” Shi Yan Ming told KungFu Magazine in 1999.

He was also taken with the star’s lack of ego, which he attributed to RZA’s viewing history. “He knows the way to improve himself very much—always be very humble, generous, welcome. He never says, ‘I’m famous’ to anybody. I believe he watched a lot of Chinese martial arts movies [and learned] movie style.”

Shi Yan Ming decided to take the rapper under his wing, and RZA began training seriously. By 1998, he was working with his master three times a week, no mean feat for one of the world’s biggest music stars at the peak of his fame. “Monday, Wednesday, Friday, he sends car [to] pick me up and go to his place,” the monk told KungFu. “He’s very busy. Some days, we go to his place, you see [him on] the phone calling somebody—talking a lot. A lot of work is waiting for him.”

In 1999, he made time in his staggeringly busy schedule to travel to China with Shi Yan Ming. It was a harrowing trip, filled with bizarre, late night escapes (Kung Fu Tai Chi Magazine covered recounted the adventure in detail in their October 1999 issue it’s really worth reading in its entirety). But it was also a powerful one. Shi Yan Min had the chance to show RZA where he came from, and RZA had the chance to visit a landmark that was equally important to his formative years: The Temple of the Purple Cloud on Wu-Tang Mountain. “It was the highlight of the trip,” RZA told Vibe in March 2000. “It was very peaceful.”

RZA also treated the locals to an impromptu freestyle set at the Shaolin Karaoke Bar at Wushu Guan during the course of the trip.

Talking to Black Belt Magazine this year, RZA reflected on his time with Shi Yan Ming. “He’s pretty intense. He trains in many styles, and for me, after reading so many books on martial arts, I didn’t want to get stuck in any one form. I like what Bruce Lee taught about [being] ‘like water and using all forms,’ so what I learned from him was the basic studies of chi kung, which is essentially the rot of martial arts. I use that as my foundation principles for whatever I want to learn.”

Keeping Lee’s principles in mind, RZA continues to explore as many styles as possible, reading books about martial arts and philosophy and going to experts when he needs a little more hands-on explanation. After years of reading a book called The Tiger/Crane Form of Hung Gar Kung Fu, and failing to properly replicate the moves described within, he finally went to a hung gar master for lessons to help him prepare for the first The Man With the Iron Fists film.

“I was fortunate to learn Hung Ga[r] from from a Hung Ga[r] master, which is basically the tiger style of kung fu,” RZA told Esquire about the experience earlier this week. “It’s the same style that Gordon Liu used in The 36th Chamber [of Shaolin]. I was able to get that form shown to me by a true master. It was a blessing to have... I’ll tell you the truth real quick. This man was probably 80 years old, and I would practice with him and we’d do...you hit each other’s arms and hit each other’s shins. This old man was hurting me man, you know what I’m saying? I’m serious! His arms was like steel, yo. I had to keep going because I didn’t want to be embarrassed. I was back at the hotel room and I told my assistant, ‘Tomorrow you practice with him and I’ll watch.’”

In that same interview, he also mentions that he primarily practices the mental end of martial arts now. He also preaches the physical and mental benefits of any martial arts practice.

“It may be simple, yo: strong body, strong mind. Body and mind have to become one. The reason why martial arts was designed was because the monks were good at meditating but they weren't good physically. So they have them exercises to help them build their physical so they could achieve high on their mental and on their spiritual. Martial arts is healthy, man. Any kid who takes a martial arts class, he learns confidence, he learns strength, he's becoming stronger without even knowing. And if you never ever have to defend yourself, the looseness of your muscles, of your tendons, the blood circulation that it builds up, the breathing that it builds up will help you in your elder years. They say the oldest person in the world is a 140-year-old tai chi practitioner.”