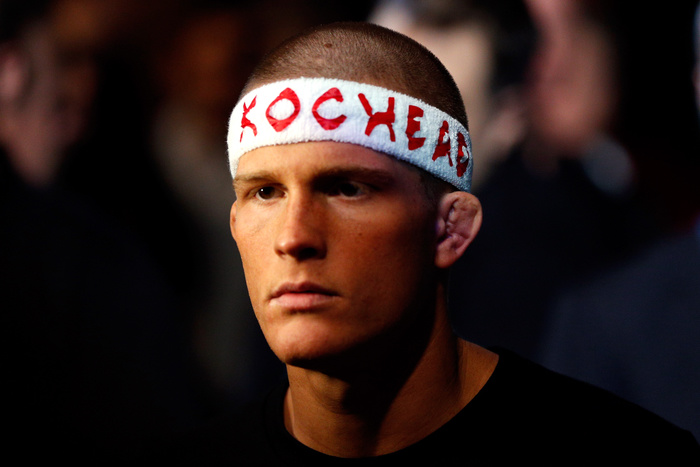 Erik Koch has had a rough few years. After coming out of Roufussport via Iowa as a top featherweight prospect, Koch has suffered enough injuries and losses to fighters in the top echelon to send him tumbling down to the prelims on Sunday’s card in Las Vegas.

The downward spiral began sometime in 2012, when injuries forced Koch out of two fights, one with Dustin Poirier and the other with then-champ Jose Aldo. Aldo then pulled out of the re-scheduled fight. A fight with Ricardo Lamas was also rescheduled. Once 2013 rolled around, Koch was out of form. Could have been the weight class, it was a long, arduous cut for Koch to get down to featherweight. After suffering losses to Poirier and Lamas, the specter of the belt was no longer holding him down to 145, so Koch decided to go up a class. He told reporters after his TKO of Rafaello Oliviera that it felt much better to be at lightweight, and that he’d balloon up to 195 or more between fights.

But since then Koch suffered a flash KO at the hands of Daron Cruikshank in 2014, pulled out of a fight with Ramsey Nijem in July of 2015 and then pulled out of another scheduled fight against Drew Dober in January of this year. And that is why Koch finds himself an underdog this Sunday, for the first time since his 2010 fight with Chad Mendes in the WEC.

Erik “New Breed” Koch once entranced a young philosopher/author and slid into her book, Thrown, as the co-main and counterpoint to Sean Huffman. Huffman was the amiable can, the one we could all sympathize with as he was pummeled by fists and life and a woman. Koch, on the other hand, was the legit legend in the making Kerry Howley describes in the very first sentence of her book. He is confident to the point of autism, skilled and athletic and fierce. He has hangers-on and real coaches and everywhere he goes, people whisper “something something potential something something champ one day” … Huffman’s ability to absorb punishment and remain a simple sweet man is almost as phenomenologically powerful as Koch at his best, predatory and sculpted from alabaster. Power and purpose made human.

All that has been rubbed out by the constant grind of a training regime that led to either injury or defeat, but never the pinnacle predicted by Koch’s friends, his brother, his coaches, or the many journalists and authors and analysts who followed him for a time. These days it’s pretty much back to square one for the small town Iowa boy who learned how to grapple and strike from his brother at the Harddrive gym in Cedar Rapids and then honed those skills under Duke Roufus in Milwaukee. No titles dangling at the end of every victorious outing, no pressure from the media or even the organization to achieve something right away. Just another Midwestern fighter with a UFC contract. 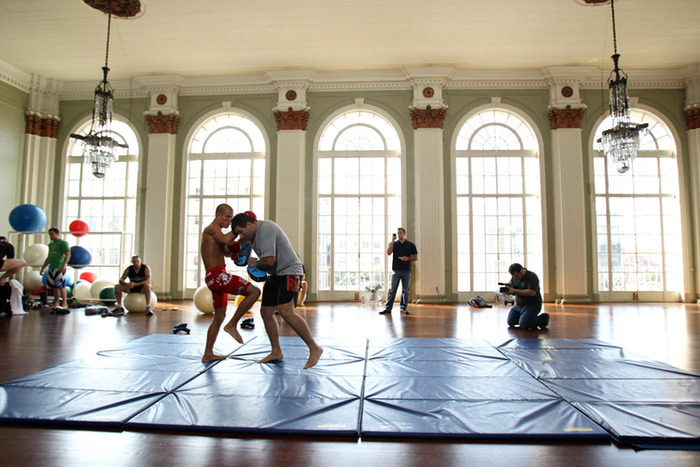 Nevertheless, this fight is most probably Koch’s last chance to slip back onto the path that seemed laid out specifically for him before destiny swerved to the left and crashed into a tree. If he wins, the path shimmers ahead of him and there’s hope there. If he loses, a pink slip may be coming, maybe not. But the dream is all but gone.

Shane Campbell is a perfect test actually: a fighter who can grapple and also comes with good Muay Thai based striking, someone who hasn’t proven much yet and doesn’t come in on a storm of expectation. Someone a fighter with great potential and the chance to still realize it should be able to beat.

Betting men feel he’ll lose, but they have it as wrong this time as they did back when Koch was coming up: in those days, they overrated the featherweight against top contenders; now they underestimate Koch against a short notice replacement in Campbell.

My money is on Koch to win this one, and if I could lay some cash on whether or not a fighter can slowly rise up like a phoenix and fulfill an old prophecy, I would. Something about the New Breed makes me believe it can still happen.

Philosophical Fisticuffs: One Writer’s Take on the Elation of Fighting