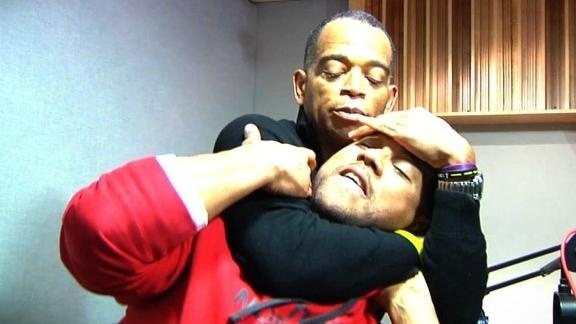 Last November, the BBC produced an audio documentary called “The Rhetoric of Cancer" in which the protagonist diagnosed with cancer wades through his ambivalence about the martial metaphors used to talk about the disease and its treatment—“battle,” “war,” and other euphemisms for “fight”—and a search for a lexicon with which he’s more comfortable. “Don’t get me wrong, I don’t want to have cancer,” says Andrew Graystone, the narrator and central character of the documentary, “but I warn you that when I die, if anyone says that I have lost my battle against cancer, I will personally come back and haunt them.”

It’s an interesting look at the words embedded in the discourse around severe illness, and it’s all I could think about while reading the recent profile of Stuart Scott in The New York Times. The longtime ESPN anchor has been enduring cancer treatment on and off since 2007. According to the story, Scott has had 58 infusions of chemotherapy to date, and a scar traveling down his abdomen evidences several surgeries, the most recent of which took place in September and kept him off the mat for five months. That’s right, the mat: Scott trains mixed martial arts, even during cancer treatment.

Scott began training in 2010, and most of the sensory experience in the NYT story takes place inside an MMA school in Connecticut as he goes through a 90-minute workout that progresses from striking to grappling. Like UFC fighter Matt Grice’s return to hitting mitts in the gym after experiencing a traumatic brain injury, training mixed martial arts is as much a benchmark of Scott’s spirit as his health. Along with continuing his vocation and keeping a public presence, throwing kicks and pretzling into and out of submission holds is an expression of renewed physical ability and of stoic resistance to something so domineering.

And by literally fighting in spite of his biological circumstances, Scott infuses life into a timeworn metaphor--all those words of warfare Andrew Graystone couldn't abide--and reclaims a cliché for the millions of people like him for whom cancer is not an abstraction or part of a slogan at the finish line of a 5K but a waking reality, one rife with in-patient hospital stays, frequent rides to oncologist appointments, heaps of bills to sort through in a chemo-induced malaise, sleepless nights, inspiring triumphs, and long, hard goodbyes.

Matt Grice Hits Mitts and Turns the Ordinary Into the Extraordinary