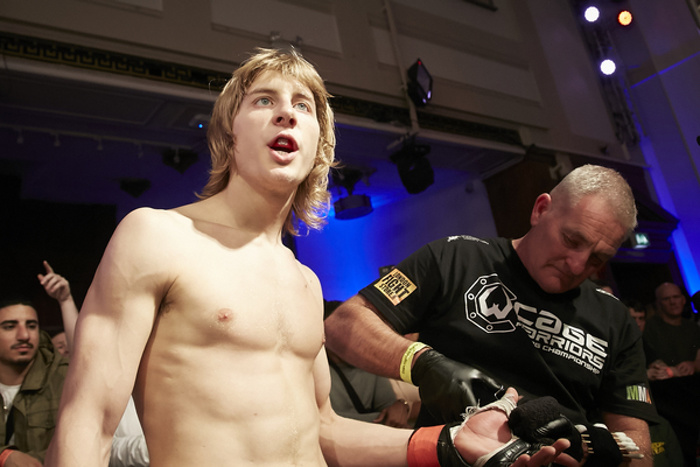 There was a lot of anticipation surrounding Cage Warriors return on Friday night. The European promotion debuted under the Fight Pass banner with their comeback card and matchmaker Ian Dean laced the lineup with some intriguing contests to announce the organization’s arrival on the platform.

Even though Jack Hermansson brought an emphatic conclusion to the night with his third round knockout of Alex Carlos to defend his middleweight title, Paddy ‘The Baddy’ Pimblett was the man most fans were desperate to see on the night.

The Liverpool native rewarded all of his interested parties with a three round grappling clinic in the co-main event of the evening. British veteran Ashleigh Grimshaw was called on to give Pimblett a test against experience and craft, but the young Liverpudlian was more than equal to the task as he banked his sixth consecutive win, improving his professional record to 10-1.

There have been plenty calling for an Octagon debut for Pimblett, but no one more than the 21-year-old himself. A captivating character, ‘The Baddy’ has demanded the attention of anyone who will hear him out. The fact that he keeps backing up his sentiments with stellar servings of slickness have now made him undeniable in terms of his aspirations for the world’s biggest mixed martial arts stage. 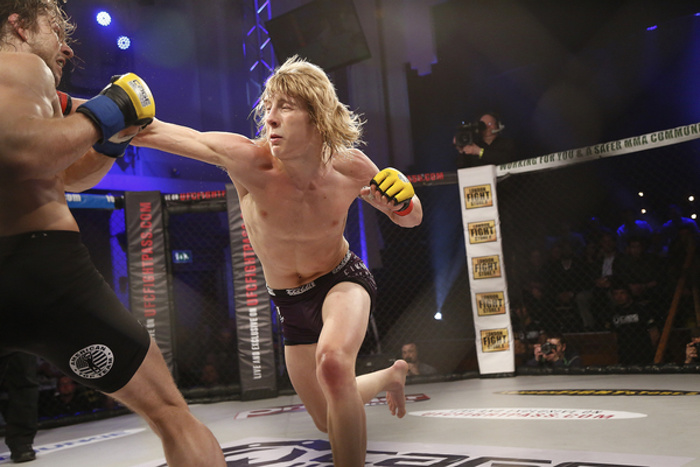 Pimblett showed some improvements in his striking during the brief stand-up exchanges that happened in his meeting with Grimshaw on Friday, but it’s his Gordian grappling prowess that continues to turn heads.

As soon as the fight hit the deck, Pimblett’s unorthodox offence took precedent. His leg over-hooking Grimshaw’s head, just as we thought ‘The Baddy’ was looking to establish high guard he dived onto a kimura. Seconds later, he had Grimshaw’s back.

Pimblett threatened spectacularly and continuously throughout the three rounds. When the final bell sounded, his celebration suggested he had an inclining to how the judges had scored the bout, and nobody in attendance argued with him. Based on his previous outings, it would’ve been silly to expect anything else.

There’s a new impetus about Pimblett since he collected his sole career loss to Cameron Else.

Five months after the October 2013 defeat, Martin Sheridan spent the guts of 15 minutes defending the submission onslaughts of Pimblett. Two months after that Conrad Hayes was forced to tap from a first round flying triangle from ‘The Baddy.’ A well-timed elbow forced a doctor’s stoppage to his next bout against Stephen Martin in just one round. Fellow prospect Kevin ‘The Machine Gun’ Petchi succumbed to rear naked choke after two rounds when he met Pimblett for the FCC featherweight title in March. The submission specialist defended the title with the same technique against Miguel Haro three months later, which was his last outing before meeting Grimshaw.

While he used to look notably smaller than his opponents, Pimblett looks like he’s filling out quite a bit now. That coupled with his already freakish flexibility will make him an even tougher test for those who he meets in the future. 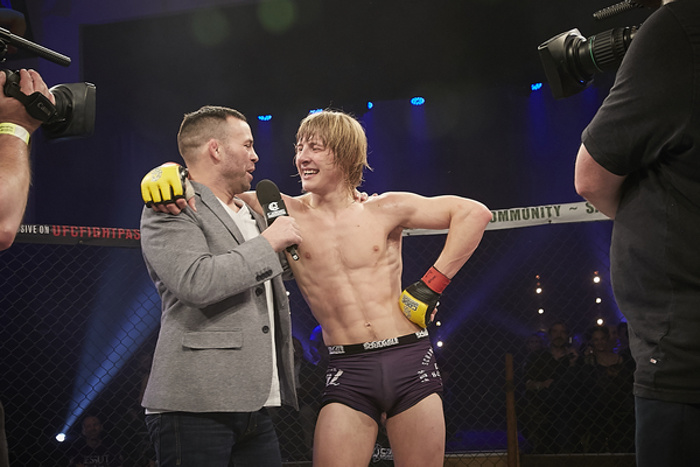 Few fighters love being interviewed, but even less recognize it as an opportunity to compel the masses. Pimblett embraces every opportunity he gets in front of the camera, and he forces a reaction out of everyone who sees him.

When his usual platform Cage Warriors went on a hiatus, Pimblett forced headlines from his FCC title win back in March. A great show with a similar reputation, Pimblett didn’t allow the fact that he same media opportunities didn’t present themselves at the event.

When interviewed by SevereMMA.com after his win about potential meetings with Artem Lobov or Andy Ogle, Pimblett knocked his reply out of the park:

“Lobov? Artem Lobov? Get me McGregor. I’ll smoke him as well,” he told Steve Cook-Abbott.

Pimblett believes that the win over Grimshaw will be enough to see him sign with UFC.

“To be honest, I think I’m going to get signed anyway. I know it’s only a matter of time anyway. I should get signed before the (Cage Warriors) title shot appears,” he told SevereMMA.com after the fight.

“I don’t care if the Cage Warriors gold doesn’t come because I know the UFC gold is going to come anyway.”

Cage Warriors are going to find it difficult to cater for another step up in competition for Pimblett. UFC will certainly be able to provide him with the litmus test we still need to see if he wants to mix it at the top of the world featherweight ranks. When the opportunity finally does come around, I have no doubt that Pimblett will have the attention of a whole new fan base before the bell even rings.