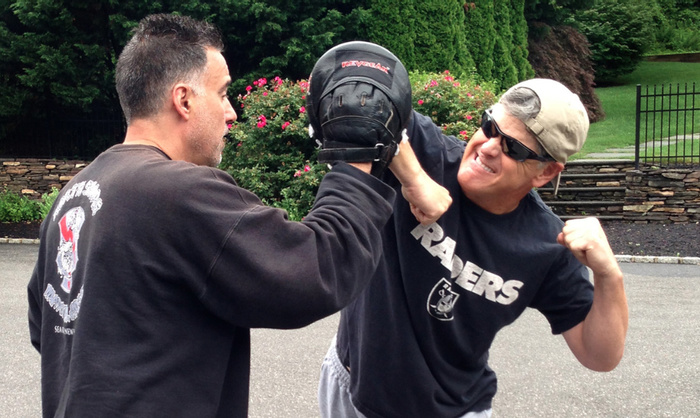 It’s been a rough election year in the United States of America, a fracturing mess of anger, disillusionment, crumbling public discourse, the gleeful perpetration of every -ism imaginable, an actual confession of assault, and increasing despair for the future. Canadians have become patronizing. The non-wrestling Baldwins have been torn apart. A bunch of Fightland writers have been called all sorts of nasty things by Putin fans. Climate change is feeling ignored by the debates and acting out by making everyone in the northeast wear shorts in the middle of October. It’s all been so dire and draining that it’s forced the citizens of the world to cling to any moment of levity or man in a red sweater that they can find. And even those attempts at escapism have ended up being swiftly disenchanting.

But, in the midst of this porta-potty fire that is 2016, there has emerged one tiny bit of catharsis that everyone not named Sean Hannity can share: making fun of Sean Hannity’s “street” martial arts skills.

Fighting out of the depths of conservative American radio and television, “Call” Sean Hannity first became an election punchline when Donald Trump invoked the pundit as some of character witness who knew his true feelings about the Iraq war better than anyone else, including his own Twitter account. But it was Hannity himself who upped the mockery fodder ante with a handful of tweets earlier this month.

GQ provided a tweet by tweet breakdown of the situation, but here’s the tl;dr version: Hannity accused fellow Fox News figure Megyn Kelly of being a stealth Clinton supporter. Some rando on Twitter made a “Do you even lift?” joke. Hannity responded to this like a rational adult media professional by transforming into the human embodiment of every Axe-soaked TapOut shirt worn at a bar playing a UFC PPV in the early aughts by tweeting back “Street martial arts for 5 years. A lot of core work.”

The giddy Twitter pile on, complete with gifs of martial arts fails, taunts, and somewhat inspired bouts of photoshop, was immediate.

For anyone who has caught more than a minute of Hannity-related broadcasts in the past few years, though, this was hardly a revelation. The host has been bragging about his “regimen of jiu-jitsu, blade and firearm training,” as Reuters described it, since at least 2014. Much like Brett, the roach who recently discovered Crossfit, Hannity just won’t shut up about his “street martial arts.”

That’s not an exaggeration. There is a not even a touch of hyperbole in the above paragraph. Sean Hannity, quite literally, will not shut up about his new hobby. Here’s a supercut of his “greatest” hits that someone made last month:

And yes, that is UFC legend Chuck “The Iceman” Liddell in some of those clips, apparently giving Hannity the gift of his trademark strikes. The two paired up in March of 2015 to... well, no one’s really sure what the actual goal was. But of course it was Barack Obama’s fault.

Incensed by footage of The President’s workout routine, which Hannity considered weak, the pundit put together an entire segment dedicated to how badass he was compared to the leader of the free(weight) world. After revealing that he doesn’t know what step-ups, a fairly common dumbbell exercise, are, Hannity tooled around in a gym with his trainer and Liddell for two and a half glorious minutes of Rex Kwon Do-like martial arts magic. Then he talked to The Iceman in the studio and showed off his fist which was “all black and blue from pounding today.” Liddell remained patient throughout the interview, which is admirable considering that, at one point, Hannity refers to mixed martial arts training as a “UFC workout.” And considering that “UFC workout” might actually be one of the high points of that segment. Thanks, Obama.

But what is most satisfying about all of this is that Sean-Jitsu is a bipartisan issue. Even his own side thinks that he’s full of shit.

When a caller informed conservative radio host Michael Savage that Hannity was “all about himself and his karate crap,” Savage could not contain his disgust. “Every one of us has his own following with some crossover, so we have to be nice to each other or we get complaints,” Savage said. “But that’s ridiculous – boasting about his karate! Any man who boasts about being a martial artist is a pushover.”

James L. Paris, the conservative Editor-In-Chief of ChristianMoney.com and a second degree black belt in Taekwondo, was not nearly so kind when he published “Sean Hannity – Bringing Shame To The Martial Arts” last year. “Radio talk show host Sean Hannity is now practicing the martial arts. If you don't know this, you have probably not listened to more than five minutes of his radio program in recent months,” he wrote. “I don't know the entire back story, but apparently Hannity has begun training in the martial arts in recent months. Many public figures train in the fighting arts as both an excellent way to develop self defense skills and as a means to relieve stress. You will not hear true martial artists, however, taking to national radio to brag about their skills (especially when they have only been training for a few weeks or months). Hannity's new status as a 'tough man' reached new heights when I heard him yesterday tell his producer that he could take him down in less than six seconds and have him crying like a baby. He went on to add that since he is talking so much about his new martial arts skills, someone might try and test him on the street. He followed up by adding that it would be no problem if someone wants to take him on.”

Incensed by this pompous chest-thumping, Paris pulled no punches: “These are the rantings of an immature child, not a true martial artist. His instructor, his school, and his fellow students should be far more than ashamed of his behavior. He is an outright embarrassment to the martial arts and to all martial artists. A true practitioner would never publicly brag about their skills. They would never make public statements about being ready to take on all comers. A legitimate martial artist would be more proud of their ability to walk away from a fight than to win one. This is the strength and maturity that one learns from getting genuine martial arts training. The martial arts have given me the opportunity to develop a confidence and an inner strength. It is the kind of quiet strength that someone can see in my eyes that would likely persuade them that there is a far better target somewhere else.”

Unfortunately, instead of learning any lessons in humility in any of his training since then, Hannity has become the kind of bro who talks up his street fighting skills on Twitter. If only his ego were as strong as his core!