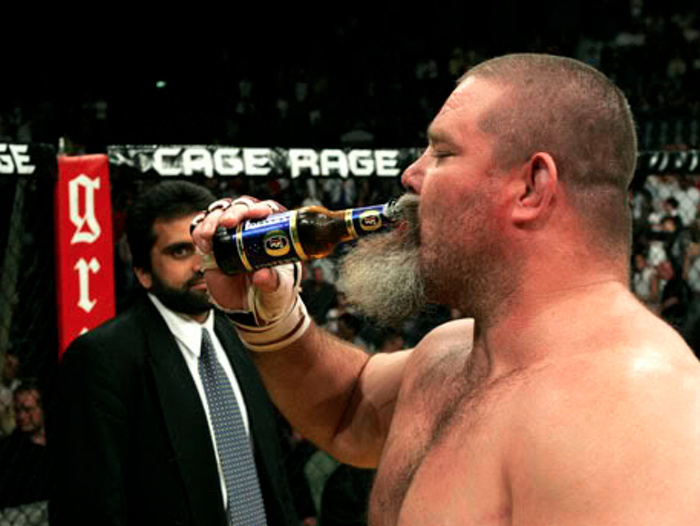 Pioneering mixed martial artist David “Tank” Abbott (10-15) recently emerged from the relative obscurity that comes with being an early UFC icon who has won just two fights in the past decade (and lost to Kimbo Slice) to add his two slurring cents to the unceasing Ronda Rousey vs Floyd Mayweather debate.

On the latest episode of his podcast The Proving Ground, the fighter, WCW pro wrestler and former Friends star declared that “At the end of the day, Pretty Boy Floyd would knock the living stuffing out of Ronda Rousey.”

His reasons for this prediction were simple: “She’s a girl. It’s all about this emotional stuff.”

But Abbott is not just talking when it comes to his firm belief in the weakness of female fighters and their emotional stuff, their ways, their mysterious seasons, the moon, Glenn Close... he’s willing to put his money and once-famed fists where his mouth is. In that same podcast, he went on to issue the following challenge: “I will fight any woman on this earth for free. If I win, which is gonna happen, and you’re gonna get bashed up good, you have to make me a sandwich. If you win, I’ll give you $100,000.”

He promises that he won’t even train for the fight. Abbott’s only caveat to this challenge is that he is only interested in taking on cisgender female fighters. “You can’t be, like, a tranny... you gotta be a female. Born a female.”

Tank followed up on his statements with a brief appearance on TMZ yesterday. FaceTiming from home, “laying in bed at 1 in the afternoon after a long day of drinking, brother,” the new face of the anti-WMMA movement declared, among other things, that “ferocious female fighter” is an oxymoron, that Rousey’s only skill is a fighter is making friends with Dana White, that Rowdy “couldn’t beat her way out of a paper bag,” and that people should vote for Donald Trump.

“A girl is a girl,” Abbott sneered. “Make me a sandwich, iron my socks, and... actually make me breakfast, that would be better.”

There are a lot of questionable assertions and assumptions going on in Tank’s argument here, so let’s try to break them down piece-by-piece:

1. The Rousey vs Mayweather discussion
Nothing that Ronda Rousey, Dana White, and other vocal members of Team Rowdy have said about the hypothetical fight that won’t die has been based on the notion that Rousey could step into a ring, cage, or street with Floyd Mayweather Jr. and knock the boxing legend out. The discussion has always been centered around the clash of technique and styles between the two fighters. Those who believe that Rousey could win are favoring her ground game and strategy, not her brute strength. The nuance of this stance is clearly lost on Tank.

2. MMA
If you read between the lines of Tank’s tirade, it becomes clear that he still believes that mixed martial arts hasn’t evolved much at all since the UFC’s infancy, when the kind of pure striking power that he once possessed was enough to win a fight on its own. But that simplistic notion of an MMA fight fell out of favor right around the time that Abbott’s success in said sport did.

3. E•MO•TION
Sure, Tank. Women’s can’t fight because their feelings get in the way. Because no man has ever let another fighter get in his head, or let his life outside of the cage seep into his training and performance. Because you are such a pillar of stoic virtue that you didn’t, you know, take to your podcast to share your WMMA-induced butthurt with the world.

4. Medicinal Marijuana
“What kind of medical marijuana are people smoking?” Abbott opined while discussing people who believe that Rousey is any good whatsoever. An odd choice, given the relatively low hallucinatory properties of medicinal marijuana. He should have just said bath salts.

5. Trans Women
It’s not exactly shocking that Tank Abbott had to add a transphobic stipulation to his offer to fight any woman, particularly given the ways in which even some of the most ostensibly progressive people in MMA struggle with the concept of trans women in the sport, but it’s still gross.

6. The ironing of socks.
Sock ironing is a surprisingly polarizing issue in the laundry community, with the pro side espousing the benefits of a crisp pair on your feet, and the antis pointing out that high heat will break down the sock fibers at a faster rate and significantly decrease the lifespan of your footwear. Whatever side you’re on, though, it’s hard to argue that ironed socks would be wasted on a man who ends up wasted in bed at 1 p.m.

7. Contractual loopholes.
Abbott does not clarify what kind of sandwich he wants his hypothetical defeated woman to make him. So, technically, a woman could lose to Tank and then serve him, say, a knuckle sandwich.

8. Politics.
Don’t take your political advice from a angry drunk man in bed. And don’t vote for Donald Trump.

That said, we should give credit where credit’s due. So let’s also take a look at what Tank Abbott got right this week:

1. Internet rage and the internet news cycle.
We are, after all, talking about Tank Abbott in 2015.