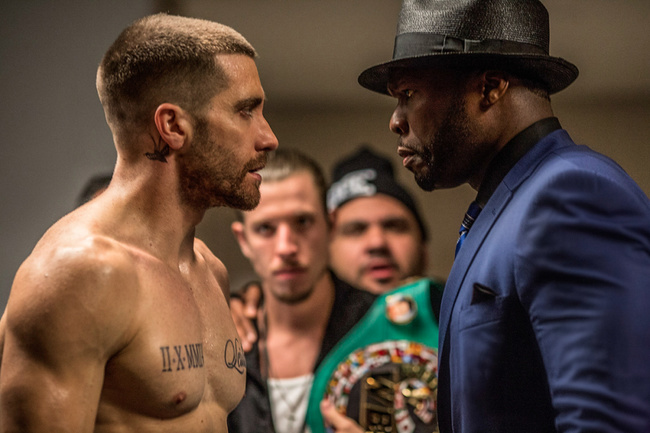 It’s been a long five years since screenwriter and Sons of Anarchy creator Kurt Sutter first sold Southpaw, his script about a former boxing champ who must fight for his redemption, to Dreamworks. But half a decade, three studios, and one major cast change later, the wait is almost over. The little boxing drama that could, directed by Antoine Fuqua and starring Jake Gyllenhaal as the embattled Billy “The Great” Hope, enjoyed its world premiere earlier this week at the Shanghai International Film Festival and will be released theatrically on July 24. A new trailer for the film dropped at the beginning of the month.

As we count down to opening day, let’s take a look at what we know about Southpaw so far:

The script was originally written for Eminem.

Sutter created the character of Billy Hope for the rapper, and Hope’s struggles as a southpaw boxer were at least in part inspired by what the writer saw as Em’s unique struggles as a white rapper. As Sutter told Deadline in 2010: I know he’s very selective and doesn’t do a lot. But he shared so much of his personal struggle in this raw and very honest album, one that I connected with on a lot of levels. He is very interested in the boxing genre, and it seemed like an apt metaphor, because his own life has been a brawl. [...] He’ll play a world champion boxer who really hits a hard bottom, and has to fight to win back his life for his young daughter. At its core, this is retelling of his struggles over the last five years of his life, using the boxing analogy. I love that the title refers to Marshall being a lefty, which is to boxing what a white rapper is to hip hop; dangerous, unwanted and completely unorthodox. It’s a much harder road for a southpaw than a right handed boxer.”

Eminem is still involved in the project, just not as its star.

Eminem put the project on hold in 2012 so that he could focus on his music, and quit entirely the following year, at which point he was replaced by current star, Jake Gyllenhaal. But the rapper is still leaving his mark on the project as the executive producer of the Southpaw soundtrack, which will be released on the same day as the film. “We have been involved in developing Southpaw since its inception, and Eminem has dedicated himself to ensuring that this film captured his passion for the project through his music,” Shady Records president Paul Rosenberg wrote in a press release. “We’ve assembled a great soundtrack to accompany what’s sure to be one of the finest boxing films ever.”

Eminem dropped his own musical contribution to the album, the DJ Khalil-produced track “Phenomenal,” earlier this month. You can hear it here.

Jake Gyllenhaal had to audition for director Antoine Fuqua’s boxing trainer to get the part.

Fuqua, who has previously helmed action epics like Training Day and The Equalizer, is serious about his boxing and dabbles in the sweet science himself, working with trainer Terry Claybon. So when he began considering Gyllenhaal for the part of Billy, he sent the shapeshifting star to Claybon’s gym to test his mettle.

“First day, Terry calls me and says, ‘Man, I think you picked the wrong dude,’” Fuqua told Entertainment Weekly. “I said ‘No, give him some more time.’ So he started working with him, and a few weeks later, he called me up again and said ‘Oh, yeah.’ [Jake’ starting sparring with a few professional fighters we had in the gym with us and he took some shots. I wanted to see what he would do. And he was in there. That’s when I knew he was going to do it.” 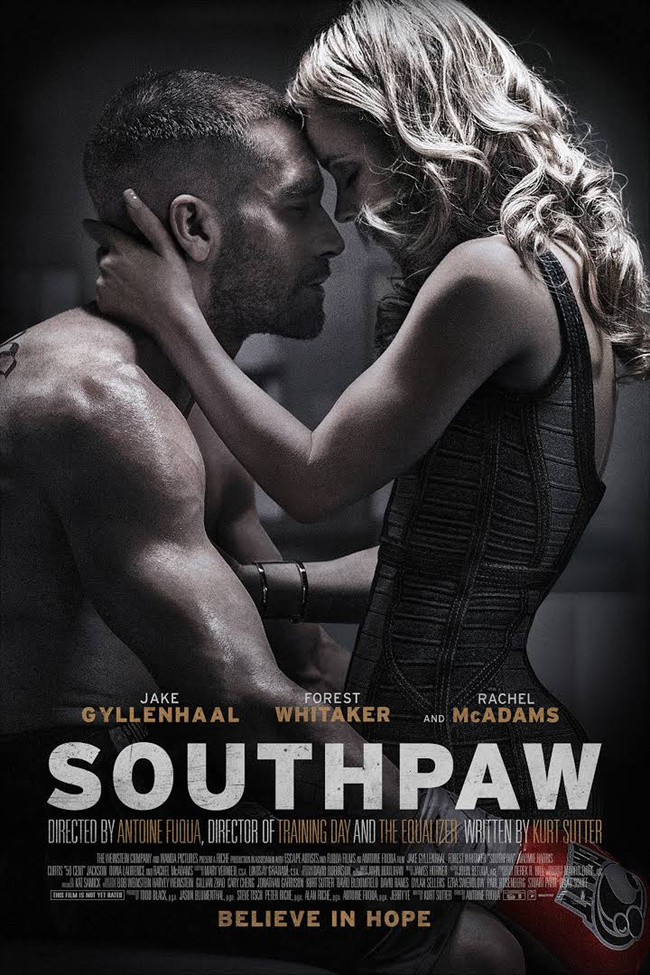 Jake Gyllenhaal literally worked his ass off to transform into Billy Hope.

“I knew very little about the science, the techniques of boxing before we started,” Gyllenhaal admitted to People Magazine. ‘My thought was, if I trained twice a day, I can make five months, 10 months [of training.] That’s what we did. I spent all my time surrounded by Antoine, my trainer and [the fighters] I was boxing with.”

Claybon stayed on to help the actor prepare for the role, and put him on a strict daily routine that included 1, 100 sit-ups, 100 pull-ups, 100 dips, 2 sets of 100 squats, jumping rope, and an 8 mile run. He developed his boxing technique through a mix of footwork drills, punching, and sparring.

Curtis “50 Cent” Jackson, who plays Billy Hope’s promoter in the film, admitted that he was both impressed and intimidated by his co-star’s physique on the Southpaw set.

“Jake was just in rare form on the entire project and he was in such great shape for it physically. He was transitioning from what he did in ‘Nightcrawler.’ He was really small and then he was buff in this film. He worked really hard, like twice a day for almost six months,” 50 said during a recent appearance on LIVE with Kelly & Michael. “I was cuddly. I was cushiony on this project, because promoters wouldn’t traditionally look like the fighter. I gotta get back in shape, because the whole time I was just seeing that energy from the people watching him, in top condition and at that point [I] was like ‘What happened?’ I fell off. I felt like I fell off.”

Southpaw screened at Cannes. Sort of.

According to producer Harvey Weinstein, the film was accepted to screen at the prestigious film festival, but they had to decline due to a conflict of interest because Gyllenhaal was on the festival’s jury this year. Instead, they hosted a secret private screening (on a boat!) that was attended by the likes of Michelle Rodriguez, Antonio Banderas, Mary J. Blige, Charli XCX, Adrien Brody, and Dita Von Teese.

Of course, this buzz was started by Harvey Weinstein himself, so take that with a grain of salt. The Oscars do love a good physical transformation, though, so maybe there’s hope for Jake’s portrayal of Hope after all.

The early reviews are mixed.

The Hollywood Reporter approved, but Variety was not nearly as impressed, calling it “a bluntly conventional melodrama about a champion boxer forced to undergo a grim crucible of physical, emotional and spiritual suffering.” Variety did have some praise for Gyllenhaal and the film’s boxing sequences, though. Forest Whitaker’s turn as Billy Hope’s gruff boxing coach is also getting some attention.

There’s only one little problem with all of this.

As the eagle-eyed denizens of Twitter, including our own Jack Slack, noticed something curious about all of the promotional materials for Southpaw, a film about a southpaw boxer who boxes from a southpaw stance because he is left-handed and, therefore, a southpaw: they feature Gyllenhaal in an orthodox stance.

And, as Boston.com has pointed out, that even includes the boxing and training clips seen in the trailer.

Strangely, no early reviews seem to have noticed this issue. We’ll have to see for ourselves how all of this shakes out when Southpaw hits screens—perhaps with a devastating right cross?—on July 24.