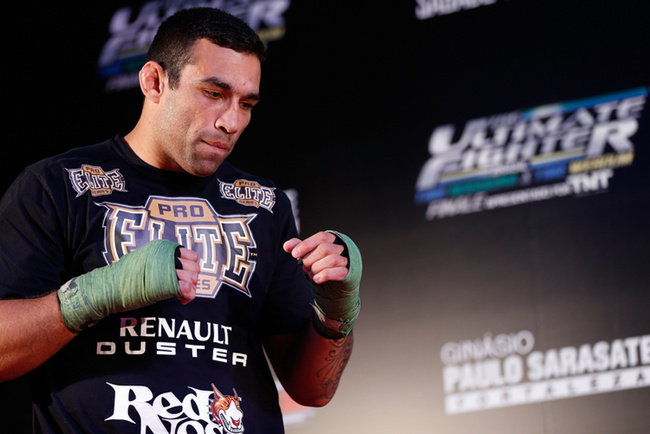 When Dana White called Fabricio Werdum to tell him that Cain Velasquez injured his knee and that he would thus be pulling out of the much anticipated UFC 180 card taking place in Mexico City, he was training in Jiquipilco, a town perched 3,500 meters above sea level. Leading up to the Mexico City event, Werdum spent two months there preparing his body for the highest-elevation UFC card ever. That Cain Velasquez was out meant very little to Werdum—although he was looking forward to challenging the champion—because at the end of the day, his focus is on the title and nothing else. Everything else is a nicety.

In an interview with Brazilian mixed martial arts source Combate, Werdum shed light on a few things leading up his matchup with the Kiwi Mark Hunt this Saturday, November 15th.

When asked about being favorited in the fight, Werdum explained that he never gets that into his head. He just doesn’t like it—that pressure exists when you’re not trained or are injured and you have to fight. If you’re well-trained and prepared—according to Werdum—that pressure doesn’t exist. He elaborates on it some more, stating that he’s never been a favorite, and that he’s always shown that—even when no one believed in him—he can get into the Octagon and prove everyone wrong. Just remember Travis Browne. Last week Mark Hunt said, in response to queries about a perceived lacking ground game, that if he were to land a strike, a Brazilian jiu jitsu black belt goes out the window. When Werdum fought Travis Browne, he beat the American heavyweight in his own game. Werdum is prepared to take on Hunt’s famous brick hands.

In prepping a strategy to take on Hunt, Werdum and his team know that the Kiwi fighter’s sluggers are no joke. Instead of defending against Hunt’s takedowns, Werdum will try to take Hunt to the ground whenever the opportunity presents itself. But that will not be at the beginning of the fight—so get ready to see a long one. Werdum understands that Hunt will be alert, waiting for Werdum to try and take him down. So to counteract this Werdum plans on keeping his distance throughout, ducking and weaving around Hunt’s heavy uppercuts and combinations in an effort to tire him out, and at that point taking him down to the mat for the finish.

A three-time jiu jitsu world champion and two-time ADCC champion, Werdum says any goal he sets for himself he achieves. At 37 years of age, he feels like he is in his career’s prime and is sure that he’ll be able to triumph over Mark Hunt.

Morning selfie with this goi lol


Both of these fighters have been very friendly toward each other in the days leading up to their fight. Werdum tells an endearing anecdote of having caught Hunt peeking at his suite’s private pool, calling him out on it. Both men laughed in jest from afar. They also took this really great selfie together.

Regardless of outcomes, Fabricio Werdum and Mark Hunt will leave everything in the Octagon to claim the heavyweight interim title, in hopes of fighting for the title unification in Mexico, once again, when Cain Velasquez is cleared to return.

Breaking News: Cain Velasquez Out Due to Injury, Mark Hunt to Replace Him