Fabricio Werdum Kicked Travis Browne's Coach and It Was Hilarious 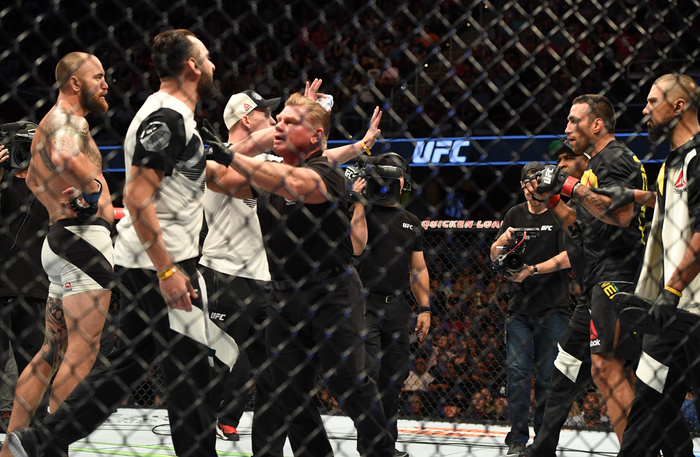 Watching the first round of the rematch between heavyweights Fabricio Werdum and Travis Browne at UFC 203 this past weekend was like watching an action movie an hour after eating acid. The edges of what's normal blurred enough that you wondered if the not-so-svelte Werdum really threw a flying side kick in the first five seconds of the fight—and really connected with it—or if Browne really called timeout for a finger injury even as UFC Vice President of Regulatory Affairs Marc Ratner explained to the viewing audience at home that injury timeouts don't actually exist in the MMA rulebook.

Past that first round, during which Werdum flattened Browne and nearly secured a choke, the fight eased into a huffy, puffy heavyweight decision that set the Clevelanders in The Q to booing. Before getting his hand raised to scores of 30-27, 29-28, and 29-27, Werdum pantomimed tears to the audience. Then Edmond Tarverdyan, Browne's coach at Glendale Fighting Club who had just screamed himself hoarse while watching yet another of the fighters he lured to his camp get outclassed, stepped toward Werdum and started cursing him out.

After Werdum threw that front kick, somewhere a producer must have screamed "nooooooo" while visions of Strikeforce: Nashville danced in their head. As much as MMA normalizes violence and shit talking to a degree that's unimaginable elsewhere in polite society, fighters and their entourages putting hands on each other after the bell remains taboo, and rightly so. Sure, it's dangerous to bystanders and it reduces the sport's elegance to ugly stereotypes and all that, but after-the-bell brawling is also just redundant: two professionals literally just fought, and it's not the time for a crappy imitation. As a practical matter, that kind of thing earns other fighters fines and suspensions, but according to MMA Fighting, the Ohio Athletic Commission won't penalize anyone for the scuffle.

At the post-fight press conference, between lobbying for a performance bonus and a title shot, Werdum briefly addressed the tiff with Tarverdyan. "He said, 'Motherfucker, shut up your mouth motherfucker,'" Werdum said. "I said what? No no no. For me, it's okay, but never my mom, you know? And I just keep the distance. He's a boxing coach. I see in his eyes he wanted to punch my face, and I just keep the distance. That's it."

A reporter had to remind Werdum of Tarverdyan's name, but of course, much of the MMA sphere knows Tarverdyan, and doesn't hold him in particularly high esteem. Despite murky experience in competing in and coaching combative sports, he became head trainer for Ronda Rousey as the former women's bantamweight champion became one of the highest profile and best-paid athletes in the sport. Even so, Bloody Elbow reported that Tarverdyan claimed no income and more than $700,000 in debts after filing for Chapter 7 bankruptcy last fall. Earlier this year, the California State Athletic Commission suspended Tarverdyan for three months and fined him $5,000 for falsifying a 2015 application for a corner's license, an application on which he failed to report 2010 charges for identity theft and resisting arrest.

There are more fight-related criticisms of his coaching acumen as well. En route to watching her get dominated and knocked out by Holly Holm last November, Tarverdyan's mid-fight advice to Rousey was bland, delusional reassurance that she was winning. (Rousey's mother, one of Tarverdyan's loudest critics, famously said, "I would run him over with my car if there wasn't a law against it.") And whether or not Tarverdyan is actually to blame, he's part of a narrative that his gym scoops up fighters like Browne and Jake Ellenberger and turns them into shells of the promising contenders they used to be. With Jackson Wink MMA, Browne went 7-2-1 in the UFC in four years, while he's gone 2-3 in two years with Glendale Fighting Club.

It's unclear why Tarverdyan confronted Werdum. Tension simmered between Werdum and Browne earlier in the week and they exchanged profanities at a pre-fight stare down, but when a reporter asked why they had become so heated, Werdum claimed he was simply responding to Browne's hostility and that he respected him as a fighter. As for Tarverdyan, there's no obvious reason why he was so over the top with emotion, screaming "advice" to Browne like "This motherfucker's too slow for you!"

Whatever the origin story, watching Fabricio Werdum flick his leg at an irate Edmond Tarverdyan is hilarious. That's what happens when fuck-you-motherfucker-hold-me-back-bro bullshit follows two trained heavyweights fighting: it makes a mockery of using abusive language as a weapon. Tarverdyan looked like a kid in Catholic school telling a nun to shut up before she took out the ruler. He looked small surrounded by giants like Werdum and Browne, and it looked like he'd keep shrinking if Werdum just kept his distance.