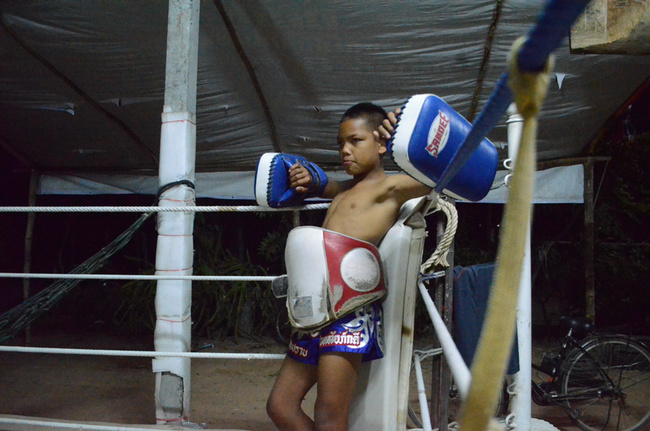 Moo laced up his running shoes and started down the village road for his warm-up. The other boys behind him giggled when a neighbor's pet monkey joined their jog. Moo smiled a bit but kept running, focused on the road ahead. Twenty minutes later, he was pulling a tire for resistance up and down the road and making sure the other young boxers were following his lead.

Moo sipped water by the ring of the village gym. His uncle donned a pair of Thai pads and held for Moo, then put him through clinch training. In Moo's Muay Thai life, his uncle has taken on the role of his trainer. He’s also a father figure. Moo's real father is missing an arm and has a hard time finding work. His mother is addicted to gambling. The family, working as farmers in Isaan's Buriram Province, never has enough money. For the last few years, Moo and his brothers, also fighters, have been bringing in much of their family's income in the form of fight purses. 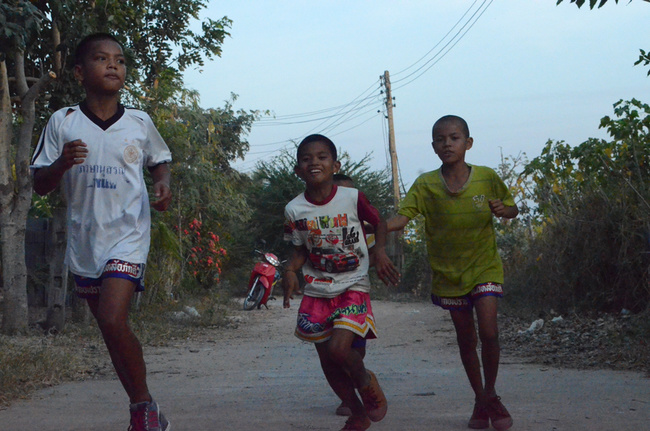 Moo comes to Dor. Pewlawpakdee Gym daily, runs alongside a sprawling vista of rice fields on a potholed village road the local Thai government forgot to repave. He's taken on a second job, training the younger boys. After he finishes his own rounds on pads with Uncle Na, he slips a belly pad over his midsection and calls one of the younger boys over.

The boys pay attention to Moo—he's a champion and he's their teacher. They range in age from 8 to 11, and all dream of one day becoming a champion too. They all know their young trainer’s fight name, Moo-Sua-Dam. A four-time champion, the main breadwinner for his family, and one of their trainers. 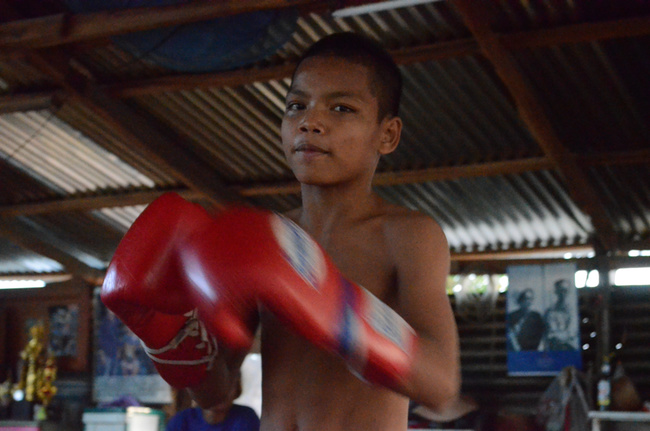 Moo walks around with a swagger, exuding confidence rare for someone so young. I found Dor. Pewlawpakdee Gym with the help of Frances Watthanaya, a local fighter originally from Canada, and owner of the nearby gym Wor. Watthana. She pointed Moo out during their warmup run. "You see that kid?" she said. "Local champion. You can tell right off. All the champions I've met in Thailand are confident, if not cocky. First time I came to this gym, he walked right up to my daughter and pinched her cheek affectionately and asked me when I was fighting. Most kids at the gym just stare at us."

Moo doesn't attend school. Instead, he's working to provide income for his family. His job is to fight. He is the star of the family, having won titles in four weight classes, though with no belts to show for it. Belts must be purchased. His manager didn't bother, and his family couldn't afford them.

It's been six months since Moo's management last let him fight in Bangkok, where he trains out of the famous Petchsiri Gym. Competing in the capital city is vital for the career of a Thai boxer, but for fighters from distant regions like Isaan and the south, traveling to Bangkok for fights is often prohibitively expensive. At his current weight, Moo makes better money fighting in Isaan, mostly due to something called a side bet—an agreed-upon sum put up by both opponents' gyms, winner takes all.

Management plans to send Moo back to Bangkok once he has grown into a higher weight class, and thus larger purses. That is, if he can make it through the next few years. Adolescence is a time notorious for tripping up promising young fighters like Moo. At age 13, he is already showing signs of falling through the cracks. Local gamblers cluck after his occasional bad performances, speculating about whether he'll reach his prime money-making potential. 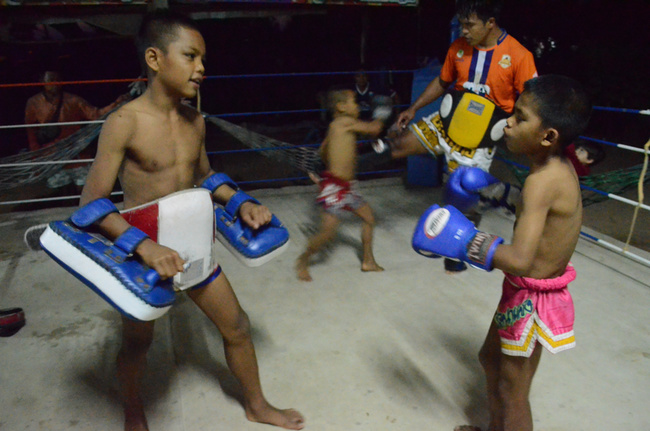 Part of the uncertainty of his future has to do with frequency of fights. Moo has already fought over 100 times, even at age 13. According to Frances, who runs her own gym, Wor. Watthana, Moo is fighting at a rate that may impede his development into a top-level adult fighter. "Sometimes kids will fight too often because families need the money. At his level, he shouldn't be fighting more than two times a month, but even though he is managed by a big gym, they don't get him fights often enough so he finds fights on his own too."

Teenage years are a perilous time for virtually all fighters. The coaches and trainers with whom I've spoken all over Thailand echo the same sentiment—if a promising fighter can make it through adolescence focused on the sport, they have a strong chance of reaching elite status in early adulthood.

Most kids, even highly talented ones, don't make it—too many distractions, too much pressure. Drugs. Chronic injury. Burnout. Resignation. Apathy. "There's a lot of pressure on Moo," Frances said. "He is 13 and the provider for his family. Muay Thai is his job and he treats it like a job. He is treated like an adult—he has the same responsibilities as an adult."

The sun had set and overhead lights lit up Dor. Pewlawpakdee's ring. Training was over. Moo ran around laughing with the other boys, acting like a kid in those moments, playful and exuberant. It was starkly different from the Moo I'd seen just minutes before, with his Thai padded hands, calling various boys up for pad-work. The boys had respected him as they would an adult trainer. He corrected their form, told them if they want to be champions, this is how they have to train.

Fighting for Identity: The Life of a Transgender Kickboxer in Rural Thailand