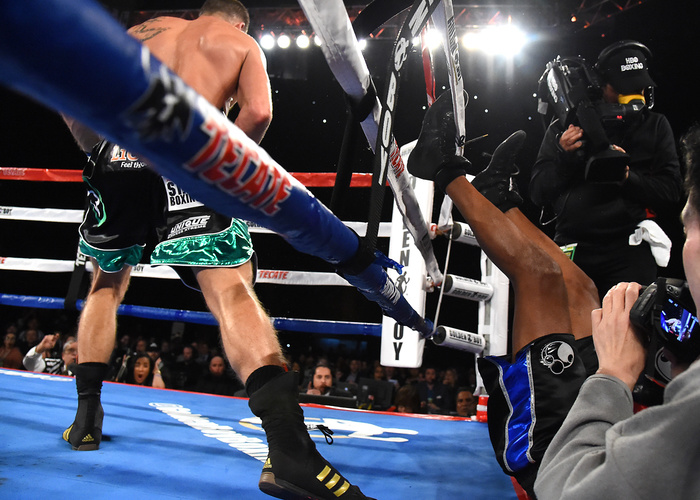 The state of California is often overlooked as a hive of combat sports activity, overshadowed by the neighboring state of Nevada, home of the “Fighting Capital of the World,” Las Vegas.

Saturday night saw both Northern and Southern California awarded the opportunity to play host to the curtain call for two future hall of famers in their respective fields—Urijah Faber in his hometown of Sacramento, the state capital, at the newly-opened Golden 1 Center for UFC on Fox 22, while the age-defying Bernard Hopkins fought his final fight at The Forum in Inglewood; the depths of Los Angeles.

Faber, one of MMA’s pioneers and a key figure in bringing the lighter weight classes to the prominent position it enjoys today, rekindled his love affair with Sactown as he received a hero’s welcome upon his return to the Octagon in front of his people.

As “California Love” blared across the Golden 1 Center’s sound system, you couldn’t help but have the lamenting sense this last time we would see Faber put on the 4oz gloves seemed far too soon. While, at the same time, it felt totally fitting how Faber—a man who always marched to the beat of his own drum—was going to end his career on his own terms.

How many times have we seen the fighters we admire leave it too late before their respective sport retires them rather than the other way round? It was a feeling akin to that of proud parents seeing their bairn leave for pastures new, but wanting them to stick around one more weekend to have another Sunday roast and watch the football together for the last time.

Faber was in imperious form on Saturday night, scoring a number of knockdowns and coming close in securing a stoppage win through some close-call submission attempts against wily, tough-as-nails Brit Brad Pickett.

Faber couldn’t finish the fight, but won a comprehensive unanimous decision, with scores of 30-26 across the board going in the American’s favor, against a man who long traversed the lighter weight classes during their mutual pomp in WEC before the now-defunct promotion was amalgamated with the UFC. 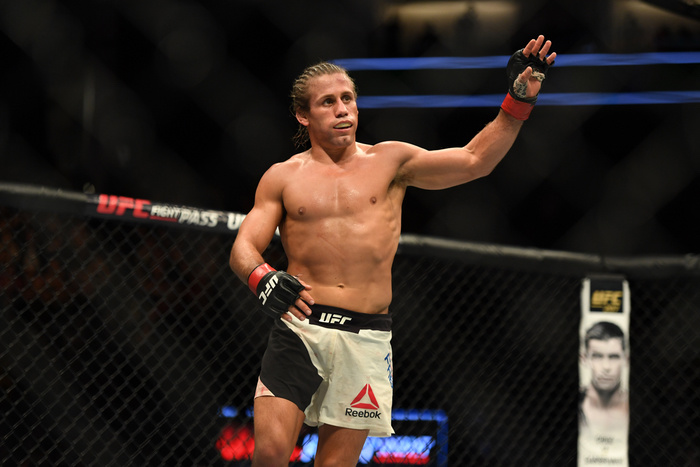 Emotional and wracked with nerves, Faber looked like was more than capable of continuing his 13-year MMA journey. Despite his extensive experience in the sport, Faber’s final outing gave him the worst pre-fight jitters he’s ever encountered—which meant he couldn’t totally soak in and embrace the adulation directed at him. “Unfortunately, I didn’t have a chance to enjoy that either,” Faber said during the post-event press conference. “For the first time in my life, after a workout I’ve thrown up. So I threw up like five times, and that was a first.

“That was also the first time ‘Big’ John McCarthy was a referee for me, and I’ve been a fan of his since high school, which is kind of weird. So, a couple of firsts tonight. First retirement fight, first John McCarthy fight, first throwing up a bunch.” 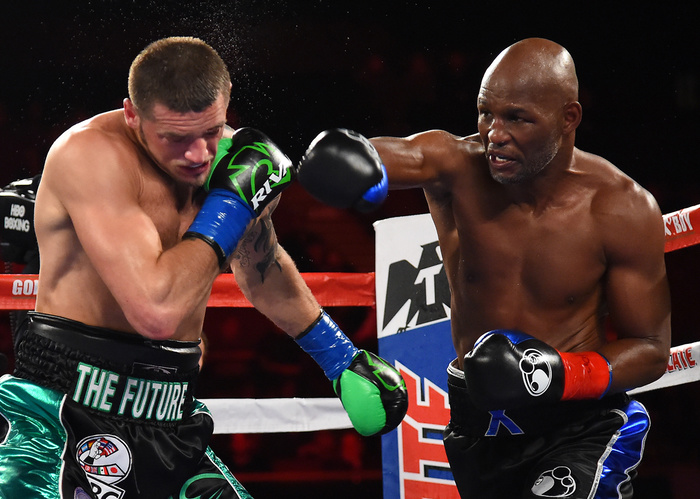 A man who is not lacking in experience is the night’s other retiree—Bernard Hopkins. Competing in his final showing inside the ropes was a man whose 28-year career dwarfed that of the other subject of this article.

Just a month shy of his 52nd birthday, “The Executioner” defied the inevitable problems posed by age in fight sports—boxing’s Benjamin Button. The Philadelphia’s long, storied career has seen him win multiple world titles as a two-weight champion—including the WBA, WBC, IBF, WBO, The Ring and lineal middleweight titles, as well as the WBA, WBC, The Ring and lineal light heavyweight championships.

Hopkins’ final fight was against Joe Smith Jr.—the WBC International light heavyweight champion fighting out of Long Island, New York. Like Faber, Hopkins was coming into the fight off a loss—in this case against Russian light heavyweight stalwart Sergey Kovalev in a one-sided decision loss, losing his belts in the process.

Wearing his Executioner garb of old, the 6,500 in attendance at The Forum were hoping for one last dose of nostalgia before Hopkins hung up his gloves. But, having not fought for two years, it took a while for Hopkins to get warmed up in his would-be grand finale. The younger Smith, who was born a year after Hopkins started his professional boxing career, was the aggressor in the early rounds.

Hopkins appeared deterred by the power of Smith. But, the wily veteran looked to have found his groove as the fight became more competitive in the fifth and sixth rounds. Smith once again wrestled the momentum off Hopkins in the seventh round—and said momentum carried through to the following stanza and the fight thus ended in dramatic fashion.

Roman comic playwright Plautus coined the term “tragicomoedia,” or tragicomedy—a literary genre which blends aspects of both tragic and comic forms. The ending to Hopkins’ curtain call certainly fits in this particular category of drama.

Watch: @beastsmithjr knocks @THEREALBHOP out of the ring 53 seconds into round 8, ending the fight. #Final1 https://t.co/Pj2svLUlC9

Smith managed to cut off the ring and pin Hopkins into the corner of the ring, before unleashing a six-punch combination on the recoiling B-Hop. Staggered from the five punches beforehand, the left hand of Smith caught Hopkins while he was bending over and its momentum knocked Hopkins out of the ring and crashing down to the floor of The Forum 53 seconds into the eighth round.

Jack Reiss, the referee overseeing Hopkin’s last appearance in the ring, started the obligatory 20-count required if a boxer is ejected from the ring. But, amid all the confusion and Hopkins’ claims Smith pushed him out of the ring rather than punched him, Hopkins was unable to get back into the ring in time after hitting his head and hurting his ankle on the way down. At the time, Smith was leading on the judges’ scorecards. 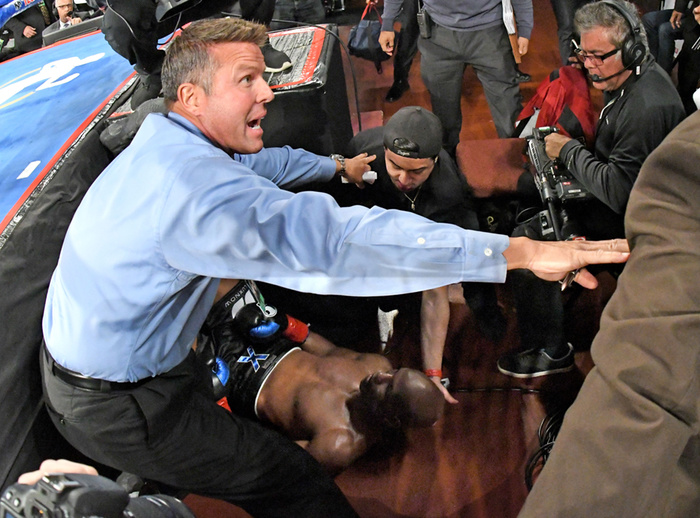 Smith, who Hopkins hand-picked as an opponent ahead of the fight, told HBO: “I knew he was a true champion, and if he didn’t get injured he’d be back here,” Smith said. “I came here to do my job. This is my coming out party, too. I had to finish him. It was either my career was going to end and his was going to end, but I needed mine to continue.”

Believing he was pushed out of the ring and perturbed at the fight’s end, a beleaguered Hopkins said: "I was throwing the right hand and a combination and then using the rope as I'm known for, and making a mess. He got frustrated, and I might have gotten glazed with a left hook and next thing I know he was throwing me out of the ring.

"I injured myself and hit my head first and hurt my ankle. I knew of the 20 seconds, but couldn't stand up on my feet because my ankle was injured. I said I could walk but I couldn't box. I had a choice to make, but I guess the referee made it for me. I know if I hadn't made a mess and gotten knocked out of the ring, I would've come back like I'm known for and would've had my chin."

“This is my last fight,” Hopkins added. “I promised it would be and you come to that point in life where it is final and I’m happy with my retirement. I know the fans will know I went out as a soldier, fighting the toughest, baddest opponents. I’m not saying I agree, I’m not in denial—Joe was a tough, heavy hitting fighter.”

Finishing his career with a 56-8-2 record and fighting in his classic defensive style only a man from Philadelphia could pull off, Hopkins ended his career as he had started—with a loss. However, Hopkins had never been finished in a fight until Saturday night and it most definitely stung.

Hopkins’ ego undoubtedly took bigger damage than his body had following his encounter with the arena floor, especially considering how he prided himself on having never been stopped before now.

It’s clear Hopkins wanted to finish his career on a win following his loss to Kovalev. But, had he the unemotional nous that of Faber’s, perhaps he would have known to end his career on his terms and on a high—he was a world champion aged 49, remember. Faber was never losing to Pickett in his own backyard on Saturday night. But, aged 51 and coming off a two-year layoff, it was certainly conceivable Hopkins would lose in violent fashion to a younger man almost half his age and one who has 19 of his 23 wins coming by way of knockout.

Despite his disappointment, Hopkins is certain to have called it a day for good. "Things unfortunately happen," Hopkins said. "I don't want the fight to end the way it did. I'd rather get beat or a win where it's clear to everybody. But I'll say it one last time. I'm really serious about this: Win, lose or draw—trust me, if it had been the other way around—win, lose or draw, or controversy, that's it. I have no regrets."

Going forward, the focus for both men is trained on their respective business interests. Hopkins will be promoting fights in his role as a partner in former foe De La Hoya’s Golden Boy Promotions company. Meanwhile, Faber has plenty of irons in the fire—guiding his band of fighters competing from his Team Alpha Male stable, along with various TV and apparel projects in the pipeline. Though they most definitely earned their escape routes from fighting through savvy and hard work, both men should be grateful they have future money-making ventures prepared for once they leave the ring and cage. The same can’t be said for many of their colleagues.

Professional fighting isn’t just about two men or women having a scrap in front of a paying audience—it’s an art form which harbors some extreme complexities. Saturday night was a sobering reminder of that. The juxtaposition of Hopkins’ unsuccessful curtain call and Faber’s victorious departure perfectly encapsulates both the glory and cruelty of combat sports.

Bon Voyage to The California Kid