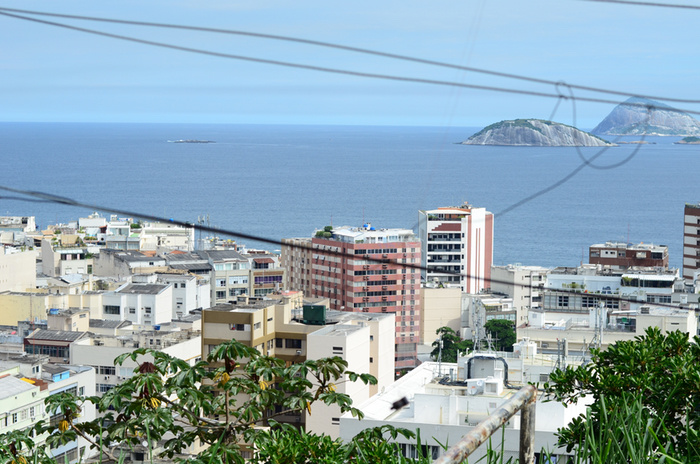 [Nico Ball recently left her life as a teacher to train mixed martial arts full-time in Brazil. Originally from Pennsylvania, she attended George Mason University in Virginia and got her Masters degree studying the impact of martial arts-based social projects. She's now living the fighter's life and pursuing her dream to become a pro mixed martial artist, but has found a way to continue her interest in creating social change by helping organize The Tererê Kids Project, a nonprofit for the children living in poverty in the favela of Morro do Contagalo. The project is centered around jiu jitsu star Fernando Augusto da Silva, widely known by his nickname Tererê, who used the Gentle Art as a way to escape a life of crime. We asked her to send us periodic updates of how the Project is going.]

At 6 A.M the favela is asleep and there is a stoic silence that is interrupted only by the smell of freshly baked bread, the early cry of the roosters, and the sporadic crackling of the drug dealers' radios. At 6:15, Julio Nogueira left his house, he stopped briefly to stuff a few stray beer cans lying in the street into a small white trash bag, that he's taking to deposit into the large bins at the base of the favela, and then continued on his way.

He turned the corner and stopped once more at the top of the stairs to take in the view. The edge of the stairs dropped off into a desolate cement soccer field piled with trash and other debris. There had once been a fence that bordered the field and protected balls from flying down the mountainside, but it had been torn down and left on the side of the field. It looked abandoned, but in actuality, it was still a popular place for kids to play or ride their bikes in small circles.

Beyond the field was a breathtaking view of the ocean and you could see the lights from cruise ships twinkling in the distance. Three blocks of neatly organized rooftops that were divided by the narrow streets replaced the beach. It was a stark contrast from the haphazard allocation of houses in the favela where Nogueira had been born and raised.

Nogueira is one of Terere's cousins, and like Terere, he grew up training jiu jitsu and working with the kids from his community. During the day he works as a personal chauffer for a family, afterwards he heads straight to the project. On weekends when he is not accompanying kids to tournaments, you can usually find him at the beach or out dancing Samba.

You would think that waking up at 5 A.M. and returning home well after 10 P.M. would wear a person down, but Nogueira seemed immune to stress. On the contrary, he was generally the liveliest person in the room. His charismatic nature rivals that of his cousin, and it's one of the reasons that so many people fall in love with training at the social project. It doesn't matter what language you speak, Nogueira can show you a good time—and he does it all for the love of the sport.

Several students playing in the favela before class

The majority of students at the academy are either bolistas, members of the community that don't pay tuition, or gringos, foreigners whose monthly fees pay for the professor's salary. There is only enough to pay for one professor, so Nogueira works for free earning a little extra cash from teaching private lessons here and there. He never worries about the money though; all he cares about was making sure his students had a good time.

Arthur Cantu, a purple belt from California, was so moved by Nogueira's efforts to welcome him into the FT family by taking him Samba dancing in Lapa and sunbathing in Copacabana that he invited him to spend a month at his house in California.

In December it was decided that Nogueira would accompany Jhonathan Marques to compete in IBJJF Pan Kids on February 14 th. Together, Terere Kids Project and Cantu raised R2000 to pay for the two visa application fees.

Nogueira was in shock. It wasn't until someone showed him an email with the money transfer to pay for his visa that he really began to believe he would actually get to travel to the U.S.

For someone from the favela, acquiring a visa is no easy task, the cost of the application fee is well above your average monthly salary and then there is an extensive amount of complicated paper work that has to be filed. It's a daunting process, but considering that he was employed, had a reliable host in the U.S., and was traveling as a chaperone, everyone involved assured him that he would be approved for his visa.

That, however, was not the case. Both Moicano and Nogueira were denied their visas and the R2000 that had been raised was lost. The project couldn't afford to make a second attempt, but a friend of Terere's offered to pay an additional fee and Moicano was able to get his visa approved. Unfortunately, he was only 14-years-old and had no one to accompany him.

Nogueira had never left the country before. He had never traveled to fight for an international federation like IBJJF or UAEJJF or to give seminars. This was a once and a lifetime opportunity for him, and Cantu wasn't about to let it slide by so easily. Cantu, along with Alister Shoa, a Calfornia native that trains with Nogueira at the project, decided to band together and raise the money to reapply for the visa, even if that meant paying an additional R2000.

On February 3 rd, a week before the competition, Nogueira was denied his visa for the second time. They gave him no explanation. For the first time in a long time, he didn't show up to training.

At the last minute, it was decided the Shoa would accompany Moicano and with less than a week before the competition, two tickets were purchased for Moicano and Shoa to fly to Pan Kids in Long Beach, California.

The day of the competition everyone gathered in Nogueira's house to stream the fights live over the Internet. His living room was packed with FT students, Moicano's family, and friends from the community. Nogueira was running back and forth between the roof where the grill was warming up, the living room to check on the fights, and out into the streets to enjoy a beer or two with extraneous members of the community that had decided to drop in on the festivities.

After three fights, Moicano became the 2016 Pan Kids champion and the first sponsored athlete from Terere Kids Project to travel abroad. It was a historic moment. Nogueira should have been by his side coaching him; instead, he stood watching attentively in the corner of his living room.

It was well after 2 A.M. before the dishes were cleaned and the last guest was ushered out of the front door. At 6:15, Nogueira left his house, stopped briefly to adjust the last few buttons on his shirt, and then began to descend the steps that would take him down to the neatly organized streets of Ipanema.