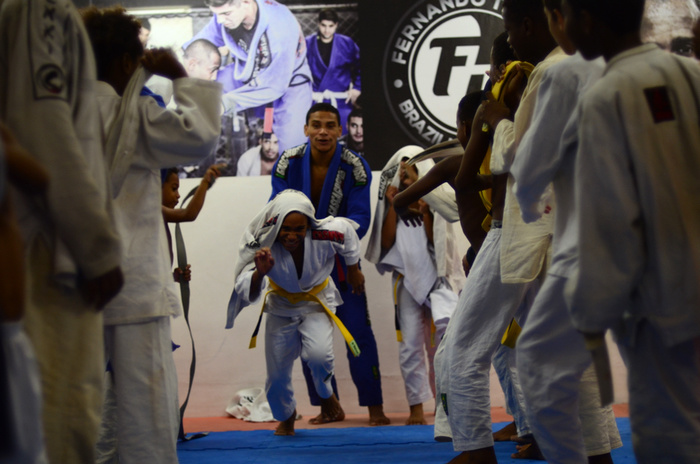 Mudinho sat sprawled out in a corner dividing his attention between Moleza and a nearby foam roller. Claudio Vinicius, a 16-year-old blue belt under Fernando Terere, is deaf and mute, but his inability to talk with people didn't stop him from joining in on the 20 minutes of morning drilling in English.

As a matter of fact, he rarely let his disability exclude him from anything, and that included mercilessly teasing his fellow training partners just like any other 16-year-old kid would do. The agonizing look on Moleza's face as his tongue struggled to work out the foreign vocabulary had Mudinho rolling with laughter two feet behind the unsuspecting Moleza. 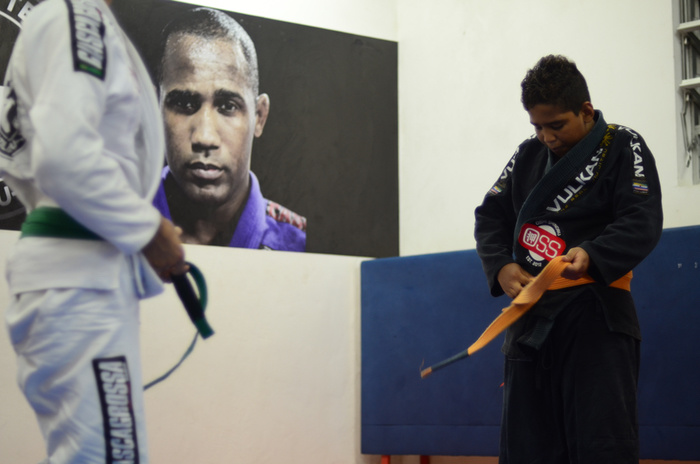 Terere's cousin, Fabricio Silva, was propped up against a nearby wall playing with his cell phone and subconsciously absorbing the lesson. Like Moleza, Fabricio was eager to learn, but expressing interest in the class would have been far from his natural demeanor. Instead, he sat to the side feigning disinterest until a particular word would spark his interest. Then, and only then, would he give any indication that he was actually paying attention.

"Switch? Isn't it change?" he asked. Teaching English at the project focuses mainly on vocabulary that students will need to work with visiting gringos. Little interest is invested in teaching them how to check into a hotel or order fish at a restaurant. After all, Fabricio rarely eats at restaurants and when the project sponsors him to travel, he stays on friend's floors to avoid the cost of hotels. 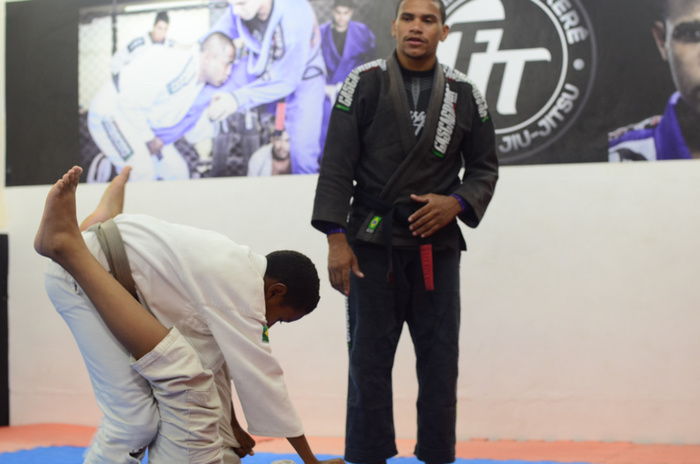 Once his question was answered he would squint his eyes and look off into the distance as he took a mental note. Then it was straight back to his phone. It would be entirely unheard of for either of them to write or take notes. Instead, they rely on constant repetition… and text messaging. WhatsApp audio messages and sending pictures of written notes is sometimes the only way you can force feed education down the throats of several generations of favela-born athletes that tend to use pens, pencils, and notebooks for the same things they use rock and balls; throwing them at each other's heads.

It's not that they don't want to learn, they have just been raised in the bosom of the favela subculture where studying has never been directly correlated with making money. Social pressure doesn't favor education either, especially for the young boys who are expected to support their families financially instead of excelling academically.

Even though everyone expresses interest, finding an allotted time to give classes at the project is anything but easy. Fabricio himself admits that he simply doesn't have the time.

"It's important because I have to give classes and learn to speak with Gringos, but there is no time. I only have a little bit of time to prepare, train, study, and give class. It's just harder for me" 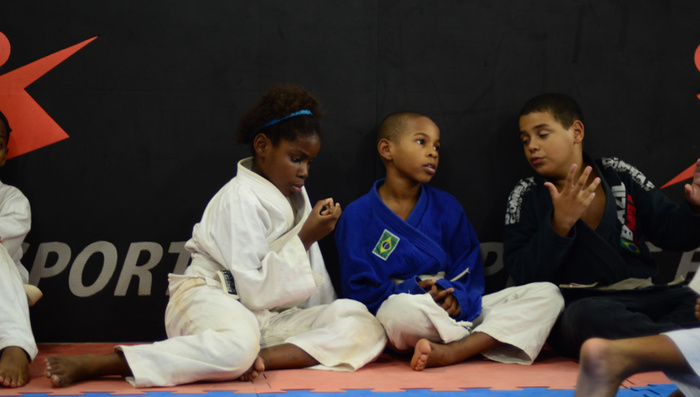 To help encourage the English program, the project started publishing bi-weekly technique videos for their San Diego based sponsors, Deus Fight Co. Moleza, who also studies English once a week in a local school, is the only student confident enough to explain a whole technique in English, and he relishes the opportunity to stand out among his peers. "English is easy," Moleza confirmed when asked what motivated him to learn when so many other kids at the project adamantly avoided studying. "I want to learn because I plan on living outside of Brazil and giving a lot of seminars."

Moleza had just learned a new position and he was adamant about getting it filmed and published sooner rather than later. So after 10 minutes of awkwardly attempting to distinguish head, red, and hand, all of which sounded "exactly the same" Moleza asked to be filmed.

Out of nowhere, Fabricio popped up from the floor and motioned for Mudinho to move to the left and get a better angle with the camera.

There are times when Terere will sit on the edge of the mat during training sipping on his favorite drink, Erva Matte, and entertain visitors with ridiculous stories. Then when the time stops and exhausted students come crawling off the mats in search of water, he'll completely refocus his attention and motion to an unsuspecting student to come sit with him. He'll pass over his cup of Matte, or chimarrão as it is called here in Brazil, slap the student on the back and starts to meticulously analyze his jiu jitsu game in the most casual of ways.

"What are you doing? Why are you standing in front of him?" He'll laugh, "You need to relax man. This is Brazil, take it easy". 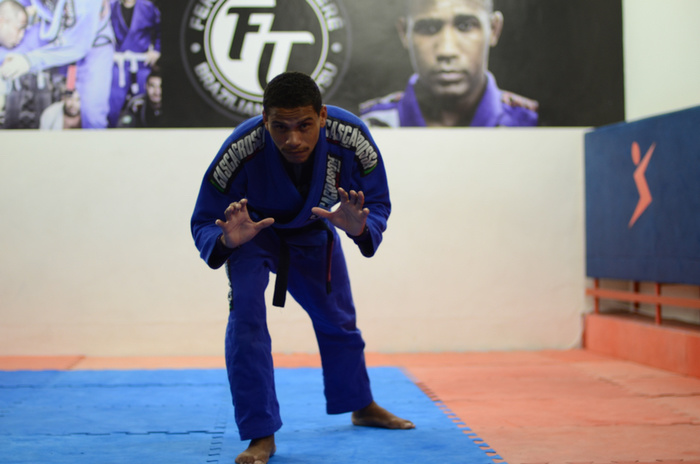 Terere has an uncanny and highly deceptive ability to absorb everything in his surroundings and his cousin Fabricio was turning out to be equally perceptive. Ever since receiving his black belt from Terere last year, he was even more focused on evolving as a competitor as well as an instructor. That meant being able to communicate with the large amount of gringos that come in search of Terere.

Fabricio's newfound interest in directing techniques was another symptom of the project's progress. Two years ago Fabricio's role was to open the gym and run a class, and he would do just that and then go home. Now his role as a professor has evolved and he has started investing more time and energy in his student. 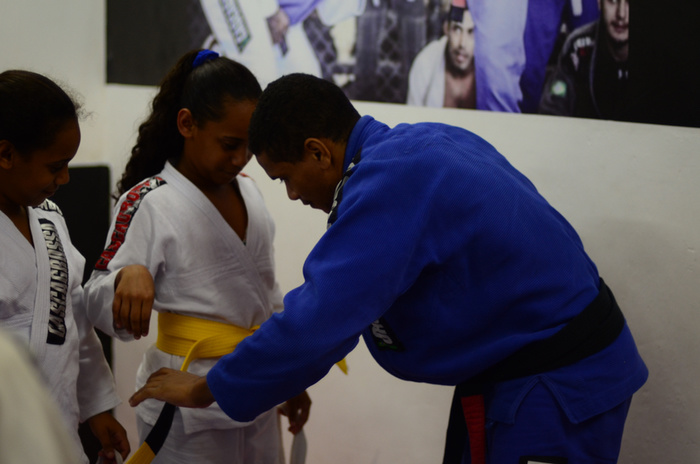 Programs at the project rarely run smoothly. Piling another responsibility on top of school, work, kids, and their reluctance to accept something new is anything but easy. Some students are hesitant to start classes because the teacher is temporary. Consistency is hard to find in the favela and kids and adults alike are reluctant to invest their time in transient people.

But when the opportunity presents itself, the project invests in materials, secures a temporary teacher, or provides money for transportation to a private school. It's an agonizingly slow process but, just like training jiu jitsu, or learning English, it's one of the only paths to improve the lives of the students.