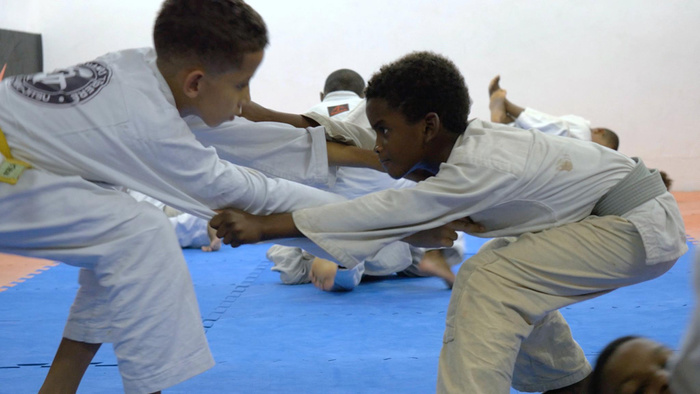 [Nico Ball recently left her life as a teacher to train mixed martial arts full-time in Brazil. Originally from Pennsylvania, she attended George Mason University in Virginia and got her Masters degree studying the impact of martial arts-based social projects. She's now living the fighter's life and pursuing her dream to become a pro mixed martial artist, but has found a way to continue her interest in creating social change by helping organize The Tererê Kids Project, a nonprofit for the children living in poverty in the favela of Morro do Contagalo. The project is centered around jiu jitsu star Fernando Augusto da Silva, widely known by his nickname Tererê, who used the Gentle Art as a way to escape a life of crime. We asked her to send us periodic updates of how the Project is going.]

On his first day of class, Miguel was given a brand new Cascagrossa kimono. The project had recently received a donation of 20 crisp white and blue gis that were to be distributed amongst the kids that had been training for a while. After glancing at the other kids who were already on the mats donning their own mismatched assortment of gis over jean shorts or swim trunks, he dashed into the bathroom to change. A few minutes later he reappeared and approached the front desk with a huge smile on his face.

"I need a belt." He said, eyeing the other kids as they were finally told to put away the soccer ball, fix their gis, and line up to begin class.

There were no more white belts at the project, a problem so profoundly perplexing that it almost brought Miguel to tears.

"But what about those belts he insisted!" Pointing to an assortment of purple and yellow belts that were hung on the along the wall.

He was told that he couldn't use them because they were a higher graduation, but the logic behind the jiu-jitsu hierarchy did nothing to assuage his distress. All he could comprehend at his young age was the fact that his attempts to perfectly mimic his fellow teammates were thwarted by his lack of 2-foot material used to tie the top of his uniform shut.

After a substantial amount of coaxing from the instructor, Fabricio Silva, Miguel finally acquiesced and joined the rest of the kids as they sprinted in circles around the gym. At the end of class, he returned the gi to Fabricio, who is more commonly known by the kids as Birrinho, and followed his new friends out of the gym and back up to the favela. Only after showing consistent attendance would he be able to claim the gi as his own and take the uniform home with him.

It took a couple weeks and beseeching family members to take him to the academy, but Miguel finally managed to prove his dedication and was given his gi to keep. A year later, he was signed up for his first competition. His attendance was not always as great as the other kids, but whenever one of the teachers would stop by the academy and threaten to take back his prized gi, he would begin to frequent the project again, falling right back into sync with the other kids.

Miguel's grandmother washing clothes outside of his house

Miguel is one of the many athletes that have benefited from social projects in Cantagalo. Terere has been teaching free classes in the favela ever since 2000, when he was still a blue belt at Alliance, but Terere Kids Project itself is a relatively new entity that started in 2013.

Before Terere Kids Project gained international support, Terere funded everything at the academy on his own with help from a few friends.

Every year he would take an extensive trip through Europe giving seminars, and then, when he came back to the favela, he would buy boxes of cookies and juice for the kids and make more improvements to the academy.

Alongside professor Julio Nogueira, Fabricio Silva, and several other students, Terere built the academy up from nothing—mixing cement to refinish the walls, buying ceramic tiles for the floors, and installing the cabinets and counters by hand.

"I'm not just teaching them jiu jitsu, I'm teaching them about life," he says when asked about the difficulties of having to manage an academy at home while traveling abroad so much.

His extended absences were necessary to support the project, but there was a noticeable void in the atmosphere when Terere wasn't around. Without him, foreigners, whose monthly tuition fees pay the bills, became less frequent, and when the snacks that Terere left behind for the kids began to diminish, their attendance followed suit.

It was during one of these absences, in an effort to make sure that the kid's attendance didn't suffer, that Terere Kids Project was created.

It started out as a small blog linked to a Paypal account that functioned like an unofficial Gofundme, except without the excessive fees that were cutting into the small amount of proceeds from the donations.

The first year donations were used to buy snacks, buy kids gis, and pay competition fees for kids like Miguel. The second year, the project became more popular and they were able to sponsor athletes to travel to major competitions in Sao Paulo. Now, they received support from UFC athletes like Pedro Munhoz and black belts around the world that do their own fundraising raising to help raise larger sums of donations for the project that have allowed them to send a kid to compete at the IBJJF Pan Kids tournament in California. Thanks to the support of the international jiu jitsu community the possibilities for the project are limitless.

You can find out more about the project by visiting www.TerereKidsProject.com and by watching Margo De Haas' short film shot earlier this year in Rio:

Path of a Jiu Jitsu Prodigy: 'Moicano' Makes It to California