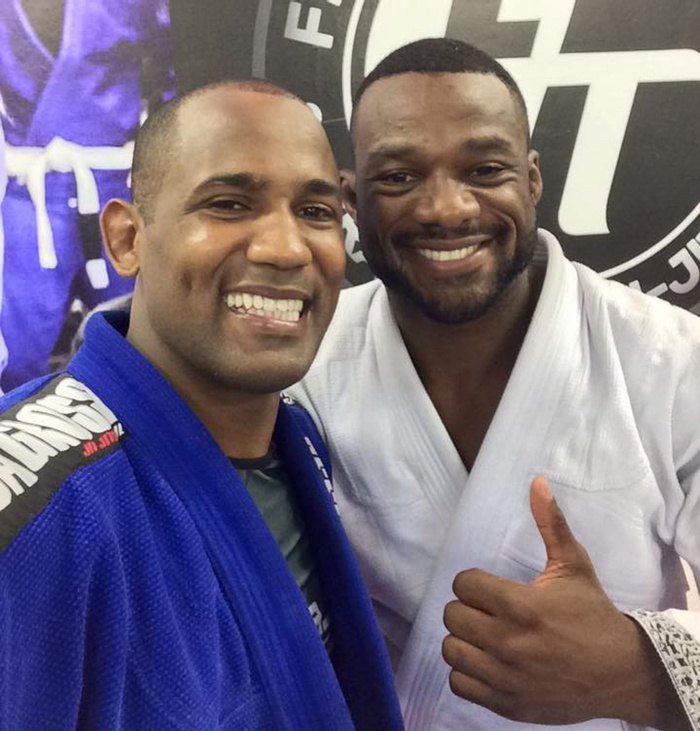 I was perched in a chair sipping on some tea and polishing up some registrations when I realized training had stopped and everyone was circled up in the middle of the mats. The kids had stopped joking and pushing each other and were sitting inert in small puddles of sweat, staring intently at the visitor that was seated next to Mestre Terere. I had never met him before but his reputation preceded him. I had been hearing rumors throughout the favela all day… He’s back, Finfou is back!

Alan de Nascimento, more affectionately known as Finfou, after a childhood game, was back in the favela, and as with most black belts from the slums of Cantagalo, his first stop when returning home from a trip is to the social project and teacher that taught him Jiu Jitsu. Like Terere, Finfou had a rough childhood and in interviews he often credits the Arte Sauve for saving not only his life but his family as well.

Finfou began training with Fernando Terere in 1994 when Fernando was still a 4-striped blue belt, making do in a make shift social project in Pavaozinho. While the Gracies were battling it out on the beaches of Barra and showing the world the effectiveness of the soft art, Terere roamed the favelas looking for his own sparring partners to indoctrinate into the sport that was beginning to change his life. Finfou was one of these victims. He was approached by Terere who offered to pay his way in Fliperama, a local betting game, if Finfou agreed to a fight at the social project. When he arrived, Finfou was submitted so many times by Leandro Martins and Terere’s younger brother, both of whom were considerably smaller than him, that he decided to give jiu jitsu a try.

Finfou trained with Terere until 2003 when he switched to the hands of Ricardo Veira from Checkmat, another prominent name in the Cantagalo favela. Although Finfou is a black belt under Veira, he was raised with Terere and they still remain close friends. Most people are familiar with the dramatic scene that took place in the 2013 IBJJ World Championship. When they stepped onto the mats for the semifinals, Finfou presented Terere with his old black belt. 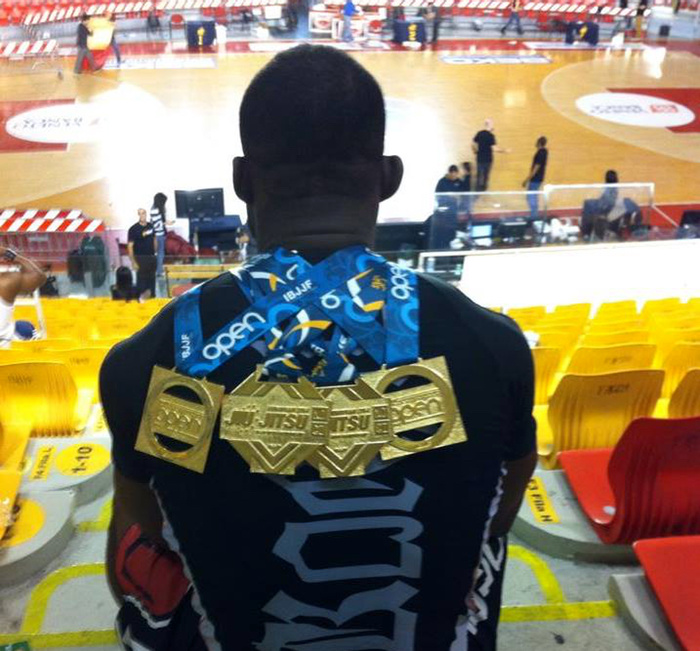 Getting your black belt isn’t easy. When you come from the favela and have faced the socio-economic challenges of growing up poor in the unpacificed slums, getting your black belt seems nearly impossible. Finfou himself cites pressure from his family to quit jiu jitsu and put food on the table at one point almost motivated him enough to join the local gang. Terere fell victim to drug abuse and an undiagnosed mental disorder in 2003, but Finfou never lost respect for his teacher.  One day, when his teacher, friend, and mentor who at the time truly struggling, approached Finfou offering to sell his belt for 5 Reais, Finfou was filled with mixed emotions.

“I couldn’t say no”, Finfou recounted, “So I bought the belt and told him I would give it back. Except in my mind, I thought it would be at his funeral. I felt like I was the chosen one protecting the legacy of Jiu Jitsu from Cantagalo by carrying Terere’s belt.”

Terere’s affection for Finfou was apparent even before I knew the story. As soon as he stepped through the door of the social project Terere stopped what he was doing and started hollering at his childhood friend. Kimonos were pulled off the wall (don’t tell Finfous sponsors Koral) and soon he and Terere were seated in the corner sharing stories.

It was impressive.  I felt like I was in a scene right out of a gangster movie where two OGs sat exchanging battle stories. Both Terere and Finfou came from nothing. They used jiu jitsu to provide a better life for themselves and for their families, but it wasn’t easy. When talking to the kids, Finfou recalled the pressure he felt by his family to put food on the table. More than once he considered joining the local gang. Some of his friends were making more money in a week than he was in two months.

“When you grow up in the favela for your family to believe in you, you have to show results, and most of the time, that means financially”. 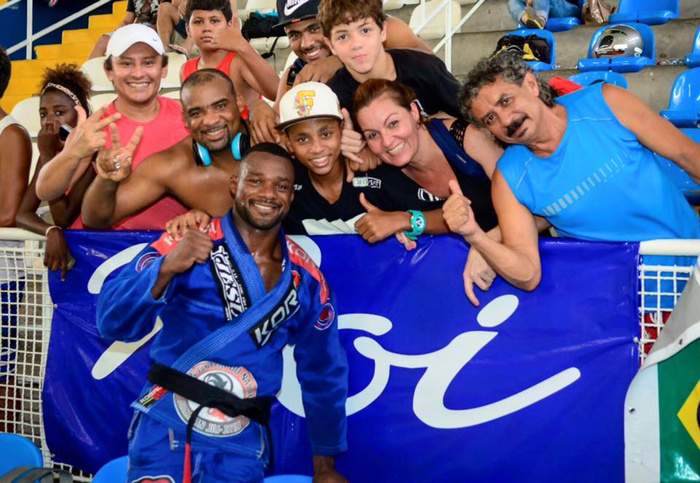 Jiu jitsu didn’t pay and Finfou often found himself butting heads with his family. As he sat around with the kids at the project, he laughed with Terere, Fabricio and Nogueira as they recalled a time when he had passed out playing soccer because he refused to eat food at home that he didn’t help pay for. The four of them smiled as they recalled Terere and professor Nogueira dragging a malnourished Finfou to the hospital.

“When your trying to achieve something in life, you have to face tests”, he explained to me over the phone. I could hear the sounds of Swedish music playing in the background as he walked around the distant European city he know called home, “and one of my biggest tests was that my family didn’t support me”.

After the death of his father in 2004 he had a choice: join the gang and follow in his father’s footsteps, or find something else to do. But what?

Jiu jitsu provided a safe haven for Finfou in an increasingly violent community where drug dealers maintained martial law. He stuck with it because, for the first time in his life, Jiu Jitsu made him feel equal. It didn’t matter if he was black or from the favela, he recalled, when he put on a kimono he was the same as everyone else. Terere took him from the favela to Fabio Gugel’s academy in Leblon where Finfou found himself training alongside lawyers and doctors in the swag Alliance headquarters.

His brothers were not as fortunate. Finfou explained how most kids in the favela are raised by single moms. His own father was incarcerated while he was still a child, leaving him and his mother on the streets until his grandmother took him in and brought him to be raised in Cantagalo. Kids were left to their own devices, where they roamed the streets of the favela.

“As a child you can’t describe right from wrong. In the beginning you just want to have a good time, then things start getting serious. People start losing their lives. People you know.”

It wasn’t an easy time to be living in the favelas of Rio. Many of Finfou’s friends turned to the local gang to find the love and support that they weren’t getting at home. His youngest brother fell victim to gang violence in 2006 two years after their fathers death.  As if that wasn’t enough, Finfou lost his older brother during a police shooting on his birthday in 2010.

The odds were stacked against him, but he persisted. He trained through his grief and brought home medals from Brazilian National cup (2006), Brazilian Nationals (2007, 2008, 2009) and IBJJF Europeans (2007, 2008, 2009) and many other prestigious competitions. He lives in Sweden with his wife and children. He speaks three languages, and like Terere, makes a living traveling the world teaching and competing.

In 2013 Finfou was faced with yet another devastating tragedy. He was competing in IBJJF Worlds in California, the dream of every Jiu Jiteiro hailing from the favelas, when he was swept, landed on his head, and was paralyzed. Nerve damage kept him off the mats and in Swedish hospitals for over a year. Most people thought he would be paralyzed forever.

Students, friends, family, and teachers rallied around him. Miraculously, he was able to make his comeback, bringing home Gold in the 2015 Rome Open alongside another Cantagalo native Jackson Sousa. It was the fruition of tireless hard work and struggle. A true demonstration of the favela spirit! 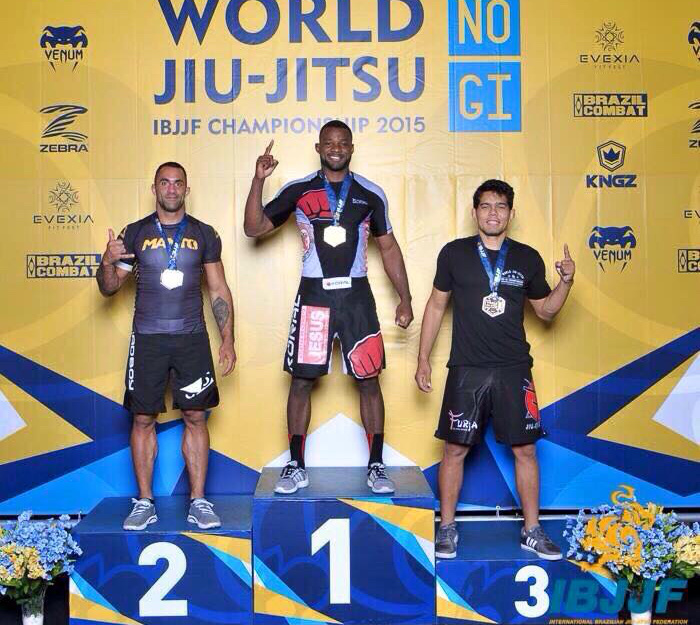 What most people don’t know about his epic comeback is that before making his way to Italy, Finfou stopped by and cleaned up at a local tournament in Rio. After receiving clearance to train again while he was on vacation with his girlfriend, Finfou decided to register for a local competition. Without telling anyone, he made his way to the historic Club Municipal, smashed his division, cleaned up absolute, and walked out victorious. Jumping back in to competition after such a long hiatus might seem crazy, he had no way to know how his body would react, but he had something to prove to himself, to his family, and to the community that looked to him as a hero.

It was a privilege to be able to hear his story. After meeting him initially at the project, I was able to catch up with him later that night on the streets of the favela. He stopped by to talk with us briefly and impart some words of encouragement to professor Fabricio, who would be competing in IBJJF BJJ Pro later that weekend. After being encouraged by Hywell Teague from Flo Grappling I decided to follow up with Finfou to get to know some more of his story. When I initially messaged him he was sitting in the airport on his way back to Sweden. He was, however, very amenable to the idea of doing an interview. While most people are exceptionally cranky and disgruntled while dealing with invasive airport security and exhausting layovers, Finfou was exchanging audio messages with me. Over the course of two days he really took the time to answer my questions (in English) and discuss the work that we have been trying to accomplish here at Terere Kids Project. It was a privilege to be able to spend some time with him, both on and off the mats and I hope his story of overcoming adversity helps to inspire other young athletes like Moicano and Moleza to continue chasing after their dreams.