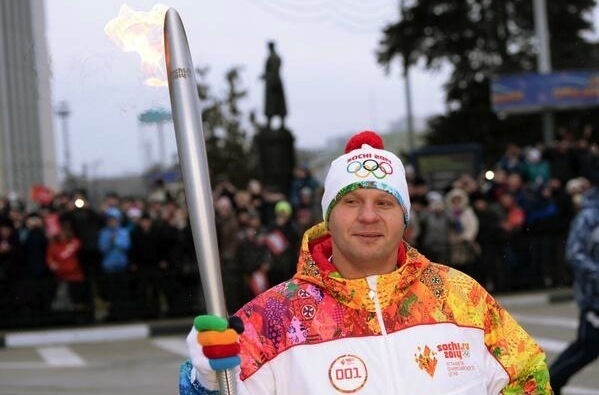 The winter Olympics in Sochi, Russia, are approaching under a cloud. The $51-billion production has been plagued by accusations of graft and corruption, with up to $26 billion in phony costs being reported by contractors and builders, many of whom are friends and cronies of Russian President Vladimir Putin. Meanwhile, activists and governments from around the world have been using the games as an opportunity to attack Putin for the draconian and vague  “gay propaganda” law passed last year that makes the “promotion of homosexuality” punishable by up to 15 days is jail. And then there’s the threat of terrorism. Sochi is located not too far from Russia’s volatile North Caucasus region, and Islamist rebel groups in Dagestan and Chechnya have repeatedly stated their intention to disrupt the games with acts of terrorism. Last month two suicide bombings in the Russian city of Volgograd killed 34 people, and this Sunday, a video surfaced in which two North Caucasus men from the Islamist militant group Anars Al Sunna claimed credit and threatened to attack the Games.

Flush with feelings of Olympic goodwill yet?

Well, don't fret; it's not entirely downside, at least not for MMA fans. For us, the cloud is tinged with a touch of, if not sunshine, at least something resembling color.

Check out the video below and you’ll see Russian MMA hero Fedor Emelianenko participating in the traditional pre-Olympics torch-passing ritual—a ritual designed to make people feel, if only for a minute or two, that the world is coming together, rather than, you know, blowing itself up.

The appearance of Emelianenko for someone like me, who first fell in love with MMA watching his old Price FC fights, is bittersweet. On the one hand, in the midst of all the madness unfolding in Russia--corruption, terrorism, government-sponsored homophobia—Fedor’s placid face and good-spirited demeanor are a reminder that not everything in the world is awful. Fedor seems so decent and so sweet, he can’t help but warm your heart in the face of all this madness.

On the other hand, I don’t know Fedor Emelianenko. I could be imagining all of this. The problem with the kind of enigmatic, quiet, stone-faced vibe that Fedor gives off is that it allows us to paint him with whatever brush we want. He’s a blank canvas, reflecting our own desires and beliefs back at us. I like Fedor as a fighter and I want to believe that he’s a pro-gay, anti-corruption peacenik who’s putting aside his distaste for Russian governmental policy and institutional bigotry in the name of sport and peace and brotherly love, but how the hell do I know? All I know for sure is that he’s a devout Orthodox Christian and a longtime friend of Vladimir Putin’s, so the more likely scenario is that he’s not that keen on gay rights and not that critical of the president’s approach toward cronyism and relations with rebel insurgencies. But, again, I don’t know. I just watch Fedor run and I hope.

The other bit of ambivalence I feel may be of less global significance, but it’s important to me. When I see Fedor Emelianenko carrying the torch, I can’t help but well up with pride at the thought that MMA, the black sheep of the sporting family, is being represented at the Olympics, the sporting family’s perfect child. Sure, MMA isn’t actually in the Olympics (and I’m not sure it should be), but at least it’s being embraced by the mainstream sporting community.

In Russia, anyway. Could you imagine UFC light heavyweight champion Jon Jones or heavyweight champion Cain Velasquez carrying the torch as part of an American Olympic ceremony? People would go crazy. They’d cover their children’s eyes; they’d write their congressmen; they’d compose disapproving blogs; they’d take to the streets. Which is the other side of my Olympic ambivalence: What gives me hope when I see Fedor Emelianenko carrying that torch right into the heart of the mainstream sporting world is the very thing that disheartens me because it means tha Russia is miles ahead of us when it comes to accepting MMA. Russia!

America, is a country that has made “promoting homosexuality” a crime really outpacing us in terms of tolerance?

Fedor Emelianenko Taught Me How to Love