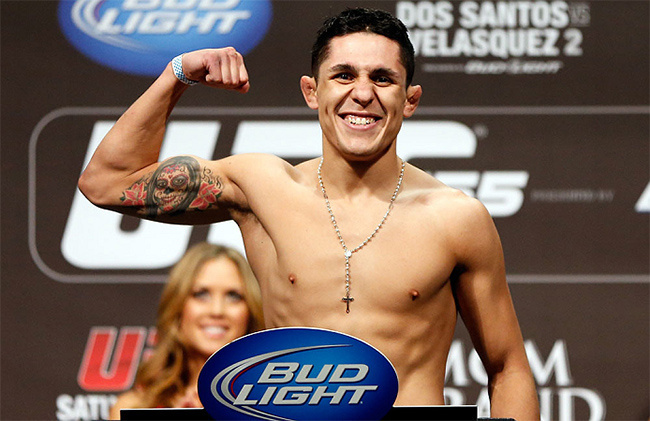 Before the strange fight-night unraveling of UFC 159 last Saturday in Newark—before Gian Villante lost by eye poke and Yancy Medeiros lost by dislocated thumb and Alan Belcher lost by eye poke and light heavyweight champion Jon Jones won but at the rather gruesome cost of his left big toe—before all that, Erik “Goyito” Perez, the brilliant young bantamweight, had to drop out of his fight against Johnny Bedford when news broke that he was in the hospital with a staph infection. “Say a prayer for Goyito Perez,” the fighter’s gym, Jackson’s MMA, tweeted out last Monday. “Been in the hospital since Saturday night with a severe leg staph infection. [Hoping] he turns the corner today.”

We know that staph infections are common in MMA, particularly when fighters are spending a lot of time grappling, but when we read that tweet we realized we didn’t actually understand anything about them. "Say a prayer"? "Severe"? "Hoping he turns the corner"? Wait, how bad can these infections really get? What happens when they do? And what can be done to make sure a simple infection doesn’t become something awful?

As always when Fightland has a medical question, we turned to our doctor, Dr. Michael Kelly--a sports-medicine specialist, part-time ringside doctor, and the author of the book Fight Medicine--for the answer.

Dr. Michael Kelly: The term “staph infection” is used kind of loosely. It refers to a specific bacteria called staphylococcus, and it’s a bacteria that’s predominately involved in skin infections. If it remains a skin infection, it’s cellulitis, but if it goes deeper than the skin it can be considered a fasciitis, when can involve the muscle, bone, etc.

With grapplers and fighters you usually see it on the skin. We see this all the time. I can’t tell you how many wrestlers and fighters we see in a given week with staph infection. A lot of it has to do with skin-to-skin contact. Staph bacteria is all over our bodies normally; it’s part of our normal skin flora and we have a lot of it. Often what will happen is a grappler will be in close contact with someone who has an active infection and those levels of bacteria on the skin are much higher. If you have a open wound of a small break in the skin and you have somebody who is sweating and has an active infection, and you’re sweating, it’s a warm, moist environment and you’re basically mechanically putting that bacteria into a portal of entry. It’s gonna grab hold and start spreading. It’s primarily skin-to-skin, but it can live on the mats and other equipment too, such as pads and gis.

The simplest form is just a skin rash. If it’s treated immediately with a topical antibiotic it usually resolves in about a week. As it goes further it gets harder and harder to resolve. That’s the problem: how deep it goes and how big it goes. Once it forms a pocket, you need a doctor to lance it and open it up. Then usually five to seven days after that it’ll resolve.

The problem is there are some strains of staphylococcus bacteria that are resistant to common antibiotics. So when you hear about these super-bugs or MRSA (methicillin-resistant staphylococcus aureus), that’s the big concern: They can get out of hand very quickly and our ability to treat them is limited. A lot of times when the infection gets to a certain extent, you can no longer use oral antibiotics; you have to use IV antibiotics--the idea being that if you’re given the drugs intravenously you get a higher concentration of the drug in the area of the infection to fight it. Things get bad when someone ignores the early signs. Usually it’s a combination of the amount of bacteria that was entered into the area and the person’s natural immunity. Fighters seem to get the most susceptible when they’re really training hard and they’re starting to cut weight for a fight, like Perez was when he went to the hospital. When you’ve got that sudden increase in expenditure your immune system does take a dip. All the stars are aligned and all the variables are lined up for an infection to spread very quickly.

The infection forms a pocket, called an abscess. The pH, or the acidity, of that pocket is different from the surrounding tissues, and because of that it can be difficult to treat because the antibiotics don’t work in that acidic environment. So what we need to do is open them up and drain all the puss out so that we can get rid of all that and allow the antibiotics and the antibodies in the immune system to work effectively.

Any infection, once it gets into the blood stream, it’s then called bacteremia, and then if your body starts having a febrile reaction to that, where fever’s spreading and all that, then the person has sepsis, and that becomes much, much more serious. It happens often.

The worst-case scenario is either life-threatening or limb-threatening. It does happen. As the infection goes deeper and deeper and eats away at the flesh, it destroys the tissue. When an infection starts overwhelming the body’s ability to contain it, at a certain point your only choice is to remove the actively infected body part. It’s like an invading army: When they start taking over control of a region, at a certain point if you’re losing you need to retreat, you give up that piece of property so you can save the rest of the area. The worst is when it gets into the fascia, which is the layer of fibrous tissue right above the muscle, because when it does it spreads very quickly through the limb. And the only way to treat is to open it up and get it to drain.

It just boggles my mind that the handlers of the fighters don’t recognize how important staph is. There are some who just blow it off and don’t clean and disinfect their gyms: Oh, it’s just a staph infection; no big deal. They don’t realize how it can propagate. I had a fighter who had a staph infection, it got pretty bad, and after treating that, I had to treat his wife and children because he brought it home.

I’m a doctor for many different colleges and a whole bunch of different sports teams. We’ve had to shut down teams because of these infections, when they start spreading very quickly. New Jersey’s regulations from the Department of Health state that if you have two or more individuals who are diagnosed with a resistant strain of a staph infection, what we call MRSA, then that program has to be shut down and evaluated for cleaning the supplies, cleaning the locker room, treating infections, sometimes prophylactically treating other athletes. One time we had a wrestling team where within two days we had five wrestlers who came back from a tournament with bad staph infections, and we had to shut down the program for a week, not only to treat the actively infected athletes but the non-infected athletes with prophylactic antibiotics to try and stop the spread. It can spread very quickly.

I know a lot of fighters don’t want to take time off from training, so one thing I’ll do is tell them, “You can keep training as long as it’s not systemic. Pick an isolated area where you’re training and make sure everything’s cleaned before and after. But don’t roll around with another fighter and expose them.” Hopefully they listen.