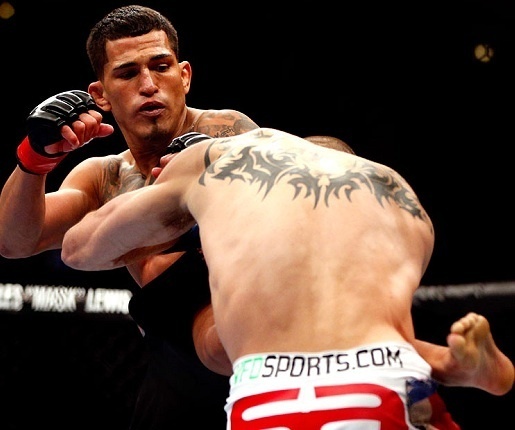 [Ed. note: It's been a good couple of months for the liver kick. First, Anthony "Showtime" Pettis finished Donald "Cowboy" Cerrone with a beautiful roundhouse to the body at UFC on FOX 7 (see gif. below). Three weeks later, newly minted welterweight Court McGee almost did the same to Josh Neer in the first round of their fight in San Jose.

The liver punch (or "Mexican liver punch") has long been a deadly weapon in boxing. And in MMA, Dutch kickboxer "El Guapo" Bas Rutten built a career on tormenting opponents' livers. Still, it's always strange to see professional tough guys like Cerrone take hundreds of shots to the head without blinking only to collapse from one kick to the body.

We decided to ask our fight doctor, Dr. Michael Kelly -- a sports-medicine specialist, part-time ringside doctor, and the author of the book Fight Medicine -- what it is about the human liver that makes it such a vulnerable target.]

Dr. Michael Kelly: At the first big boxing bout I was the supervising physician of (this is going back 10 years) I saw a fighter take a shot to the liver and he just collapsed. I was in shock at how devastating it was. And when I spoke to the fighter after the bout, he said he felt like he had no legs instantly. He was awake but he just couldn’t move. Since then I’ve had a lot of respect for the liver shot.

The capsule around the liver has a lot of nerve fibers. It’s directly linked to the autonomic nervous system. When there’s a sudden blow, there are dynamic pressure changes in the actual organ itself, and that stretching of the organ – if you compress one side it stretches on the other because it’s pliable – causes these nerves signals that go directly into the autonomic nervous system and can cause a complex cascade of events. It's something you can’t control mentally, and it causes a sudden dilation of all your blood vessels everywhere except for the brain. At the same time, your heart rate decreases. Normally, to maintain blood pressure, if your blood vessels dilate, your heart beats faster to maintain the pressure in the cardiovascular system, but if you dilate the blood vessels and drop the heart rate, the blood pressure suddenly drops dramatically. Essentially that’s what’s happening with the blow to the liver: The fighter takes a shot, you get this nerve signal going into the autonomic nervous system, your blood vessels dilate, the heart rate decreases, the blood pressure suddenly drops, and the athlete collapses. You can’t control it. You’re down.

The reason for the collapse is, when your blood pressure’s going down, your body tries to instinctively control the blood pressure, and if it can’t raise the heart rate or restrict the blood vessels, it puts the body in a supine position so that it can maintain some blood flow to the brain. Because if you lose blood pressure to the brain, obviously it’s not compatible with life.

Really, that can happen with any of the internal organs, but the reason the liver is so common is it’s the largest organ in the abdomen, and it’s the most vulnerable because it slightly protrudes under the ribcage. Kidneys aren’t as exposed or vulnerable; they have a lot of muscle on top. They’re packed up high under the rib cage and your back and you have a lot of strong back muscles. Now, the liver is probably one of the most important organs in the body for life, other than the heart. As the importance of the liver increased as we’ve evolved, the size increased. As the functions of the liver became more complex, the size increased accordingly. But for some reason the ribcage didn’t expand as much, so the liver is vulnerable.

Sometime you see a fighter going down to one knee or hunching forward in almost a fetal position after a liver shot; the body folds forward in response to the blow but the legs go out. So, the body responds to both the pain and the sudden drop in blood pressure. Fighters have told me that it feels a lot like when you get the wind knocked out of you, but you just feel like have no legs; they go out from under you. The collapse isn’t from the pain. It’s from this physiological cascade of events that goes on. We don’t know for sure why we have this response to getting struck on the liver. It does seem to be less of a protective effect and more of a vulnerability in the human body. Obviously, the body isn’t a perfect system.