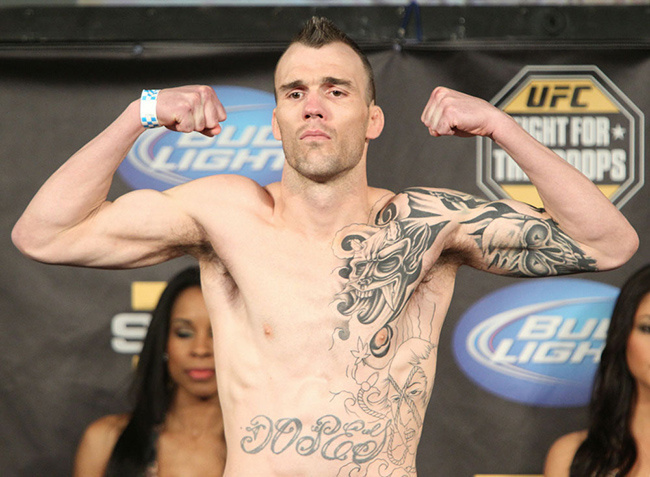 [Ed. Note: Two weeks ago, George Roop weighed in his fight with Reuben Duran at UFC 158 in Montreal. Dragging his towering six-foot-one-inch tall frame onto the scale at the Bell Center, Roop looked like a reminder of man's mortality--a lanky collection of skin, ribs, and tattoos. A former lightweight (155) and featherweight (145), Roop had decided to drop to 135 after a knockout loss to Cub Swanson a year earlier, and though he won his fight with Duran, we couldn't help wondering what kind of damage Roop was doing to his body by getting so thin so fast. Weight-cutting is as fundamental a part of MMA as jiu-jitsu--part of the warrior's code of sacrifice, if you will--so it seemed like the right time to ask our fight doctor, Dr. Michael Kelly--a sports-medicine specialist, part-time ringside doctor, and the author of the book Fight Medicine--what's going on with the human body in the midst of that kind of extreme dehydration.]

Dr. Kelly: The issue here comes down to electrolyte balances. Most of the water we carry in our bodies is in our muscles. So when you start decreasing the fluid content in the muscles, that causes the efficiency of all the enzymes and the concentration of electrolytes and glucose and all the things that are necessary for normal muscle function—all those concentrations are off when you’re doing these massive fluxes in fluid. We know from studies that you’re not as strong and your endurance goes down markedly. You see a fighter who drops a lot of water weight very quickly they burn out very quick: First round, they’re done, they’re spent, they have no reserves.

That's why it's so important for these guys to be smart about the way they cut weight, not to do too much too fast. A smart weight cut is still hard on the body but won't have the same kind of negative effects.

The other problem is, the electrolyte balance is normally very tightly regulated by your kidneys—your sodium, potassium, magnesium, and calcium are probably the most important--and you put a big strain on your kidneys trying to maintain not only the fluid balance but the electrolyte balances. And when you have an influx of water and calories after a weight cut in some people the body can’t accommodate that as fast as would normally be required, so they end up with relative deficiencies, for example the ratio of sodium to potassium or sodium to calcium become off. And if they become abnormal enough, you could end up with cardiac arrest. All the cells in our body, especially in the electrical impulses, rely on a very delicate balance of sodium and potassium. The sodium/potassium pump propagates a nerve signal along the axon, or in the heart along the cardiac fibers that conduct electricity in the heart. So if those signals aren’t propagating along the channel correctly, the heart can go into an irregular heartbeat or fatal heart rhythm and wind up in cardiac arrest.

Everything in the body is kept in very specific ratios, including electrolytes--sodium, calcium, magnesium, and potassium. What happens is when you’re body is starting to dump a lot of fluids, you’re becoming dehydrated, your kidneys start to hold on to certain electrolytes. When you sweat profusely, you lose sodium and potassium through your pores; it comes out in your sweat. Up to a certain point your kidneys won’t let as much sodium and potassium be excreted in the urine; it’ll start to concentrate in the urine. When it happens acutely, like before a weigh-in, the body doesn’t have time to adapt, so you’re more likely to develop abnormally high or low sodium, depending on whether you’re losing the weight predominately through diuretics or sweat. And you lose potassium through both. When you have high concentrations of potassium when your body’s trying to hold onto it, sometimes instead of excreting potassium, the body excretes magnesium in the urine. It substitutes different electrolytes to maintain those balances, and that’s when you start getting into the really bad electrolyte disturbances where everything goes awry. You start developing more muscle cramps, muscle fatigue. Magnesium is a very important co-factor for muscle contraction. You start getting slower mental function. In particular when the sodium goes below a certain threshold your brain function starts to immediately change. You start to become less alert, a little bit more lethargic. Plus the addition of muscle twitching or muscle spasms and electrical abnormalities in the heart—you start getting palpitations, you start skipping beats, you start having abnormal cardiac function, sometimes cardiac output can go down.

Another interesting thing is, there’s a direct correlation between severe dehydration and a loss of volume in your brain. All your body fluids, when you dehydrate, shrink because there’s large water content. With these severe weight cuts, some of the brain mass actually shrinks a little bit because it becomes dehydrated. It’s like a sponge. But when you go into the ring, you don’t have that fully hydrated, the brain becomes more pliable and able to shift more, so it can knock around in the skull, making it more vulnerable to a concussion or a knockout.