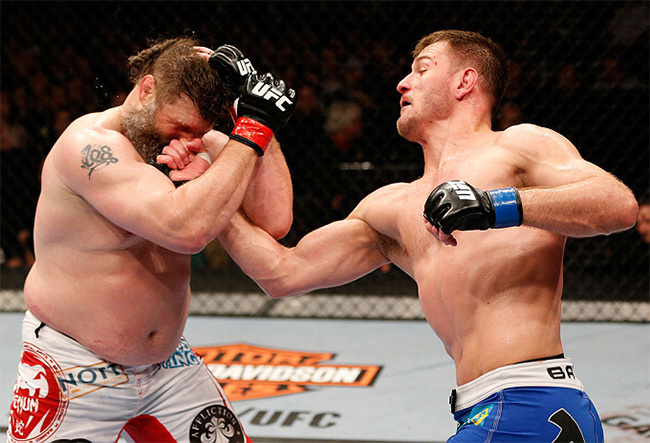 Last Saturday at UFC 161, heavyweight Roy "Big Country" Nelson broke an impressive and unfortunate record. After receiving a three-round beating at the hands of Stipe Miocic, Nelson learned that he had absorbed 437 significant strikes during his 10-fight UFC career without being knocked out. The 106 significant strikes Miocic landed on the Las Vegas native were enough to make one doubt Nelson's destructibility, but 437 strikes over 10 fights makes us wonder about his mortality, even his sanity.

It also made us wonder how it's even possible. How can one man take that much punishment from that many power punchers and never go unconscious? MMA fans, commentators, and writers can wax poetic all they want about Nelson's iron chin and warrior's heart, but Fightland isn't interested in poetry; we look to science for answers. So, we called up our Fight Doctor, Dr. Michael Kelly--a sports-medicine specialist, part-time ringside doctor, and the author of the book Fight Medicine--to find out how Big Country keeps staying on his feet and if he's doing himself any favors by doing so.

Dr. Michael Kelly: There are a few things that might account for someone having what we might call a “granite chin.” The first thing is really strong neck muscles. You can absorb a great deal of the impact. The second is the actual shape of the jaw. Some people are more vulnerable depending on the shape of their jaw. And then there's how many previous knockouts a fighter has had. If they’ve had a lot of knockouts they become more vulnerable with each fight.

Nelson might have extremely strong neck muscles. Strong neck muscles can cut down on the rotational force of a hit. A lot of what determines whether someone gets knocked out has to do with where the force is transmitted into the brain. Where there’s a very strong rotational force on the skull—shots that come from the side, like hook punches, rather than straight linear shots--most of that vector force gets transmitted down into the brainstem area into what’s called the reticular activating system and that’s what’s responsible for being awake. So when you go to sleep, certain cells on the reticular activating system will get stimulated and go to sleep. When you wake up, certain cells will get stimulated and you wake up. It’s actually multiple tracks in the lower brain stem. Together their called the reticular activating system. And you have a layer of fluid surrounding the brain on the upper part. Again, with a very strong rotational force on the skull, say from a hook punch to the side of the jaw, what happens is there’s motion on the top of the skull because the brain is sort of floating, but as you get down to the base where it’s anchored, it’s tighter. It doesn’t have as much give. So that’s when you get that kinking in that part of the brain and that causes loss of consciousness.

If you have, say, a concussive brain injury, the brain, it’s very soft, it’s like a gelatinous material, and when you have sudden dynamic vectors in multiple directions the brain can change shape on a microscopic level for a split second and that causes disregulation of the ion channels and the neurons. And you wind up getting an alteration in the normal balance of sodium that’s passing inside and outside the cell. And that’s what causes the neurons to become dysfunctional.

So as you’re hitting on the side and you rotate the head, it’s a little bit easier to transmit that force to rotate the head. Whereas, when you’re hitting direct on at the button of the chin, sometimes it’s a little harder with a very strong mandible. That's where the shape of the jaw comes in. It’s all a matter of shape and size. It has to do with the ability to transmit the force to the base of the skull

That’s why people are always talking about fighters getting hit “on the button.” It’s true, though I don’t know if “button” is really a good term for it. It’s just an area where you can get the maximum force transmitted through the mandible up into the base of the brain. The brain stem, that’s where the brain is the most anchored, so if you have a very strong rotational force, you can cause kinking and loss of consciousness. At the same time, if you have a very strong linear force, directed through the mandible going up into the base, then you can take the brainstem forward, you’ll get that loss of consciousness by the same mechanism. But one’s kinking it in a flexion extension direction whereas the other one would be kinking it in a twisting direction.

And once you get knocked out the first time, you’re definitely more susceptible to getting knocked out again; you’re more vulnerable to worse concussions. The theory is that, although your body can reset those ionic concentrations inside and outside the cell, each time that happens, maybe it loses a little bit of its efficiency. So your ability to recover isn’t quite as good as it was before that happened. So it’s like you have a gate, it gets broken, and you repair it but the repair might not be quite as strong as the original and it never holds together as well as it once did.

What we know is the fighters like Roy Nelson who can take a punch have the highest risk for developing chronic traumatic brain injury later in life. And that was from looking at autopsies of brains of fighters who had dementia pugilistica at the same time as chronic traumatic brain injury, the fighters who had the most damage were the ones who were able to take the most punishment. So the accumulation of punches is more significant than, say, going into a ring and losing 10 fights in a row by one punch knockout. It’s not the going unconscious that’s the problem; it’s the repetitive force and the repetitive micro-trauma to the brain. So with a guy like Roy Nelson, when this guy takes 430 significant strikes over 10 fights, and he doesn’t get knocked out, it would be better if he’d actually get knocked out than take that many blows.

But there are some people who are genetically gifted in the way their body is built, the strength, the shape of the skull, the density of the brain, let’s say the number of ion channels they have per neuron, or the mitochondria density in the cell, they can absorb more punishment or reduce the effect of a blow on their brain better than other people. There are a lot of variables, but some people are just more genetically gifted in that area. In a lot of sports there’s people who, despite what you may think, there’s just something they have, that they were born with, that you can’t teach or train. But it will all catch up to him eventually. No matter who you are, you can only take so many blows to the head before it starts to have its effects. So though someone like Roy Nelson has a gift for not getting knocked out, I think eventually everybody can be knocked out. Age, multiple trauma, multiple variables will build up.

This is the reason I believe boxing is far more dangerous than MMA. I’ve been the ringside doctor for many boxing and MMA matches, and I have no doubt that boxing is more dangerous than MMA. The whole point of MMA is that there are multiple targets, multiple ways to attack and I don’t think there’s quite as many repetitive blows to the head as you see in boxing. That’s the only target and the only weapon is your fist and it’s going to the same spot every time. When you look at the cumulative data, boxing has a higher risk of traumatic brain injury than we’re going to see in MMA. From a medical point of view, it’s still early to form conclusions about MMA, but just based on the actual blows to the head and the type of blows--boxing tends to be more circular based on the shape of the glove and the way the hands are taped; it’s a more circular blow. So you have a lot more of the rotational forces then you do in MMA, where the punches seem to be a little more linear.