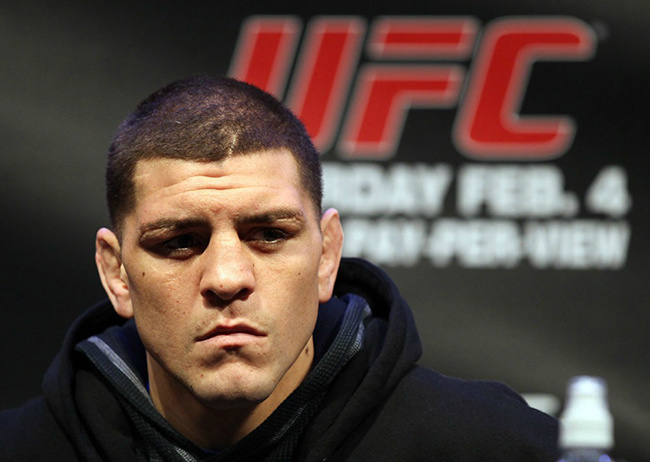 It was a great moment earlier when UFC President Dana told the press earlier this week that Nick Diaz had contacted him about getting back to fighting after a brief "retirement" following his loss to Georges St-Pierre last March. A great moment, though hardly a surprising one. Diaz is famous for two things: his aggressive fighting style and his emotional volatility. For him, retirements and quick reconsiderations are just part of the game.

When Diaz does return he'll bring his notoriously strong chin with him but also his notoriously weak eyebrow ridges. A few years ago, it wasn't uncommon for Diaz to cut easily during a fight, which meant even if other fighters found it all but impossible to knock out the Stockton, California, native, it was possible to make him bleed enough to justify consideration from the ringside doctor. Back in 2007 Diaz famously lost a championship fight to his rival K.J. Noons by TKO when the doctor decided he was bleeding too much to go on.

After that fight, Diaz sought out Las vegas plastic surgeon Frank Stile to perform a rare procedure that would, theoretically, make his skin less prone to cutting. And though the surgery seems to have worked for Diaz (there have been no doctor stoppages since the Noons fight), the procedure remains controversial. We'd been hearing about this surgery for years (former UFC lightweight, and Diaz's fellow "bleeder," Marcus Davis also had it done) but never really knew what it was about. So we called our Fight Doctor, Dr. Michael Kelly--a sports-medicine specialist, part-time ringside doctor, and the author of the book Fight Medicine--to get some answers.

Dr. Michael Kelly: It’s an interesting approach to an age-old problem with fighters. There’s always been some fighters who were doomed bleeders right from the start--Oh, that guy cuts easy; he’s a bleeder--and other fighters could take quite a beating and didn’t really get caught. The reason for it, if you look at the facial bone on the skull, in certain areas there are sharp ridges, and the more pronounced those ridges are, the more likely it is that the fighter will sustain a cut. If you get a real bad laceration by the eye or the cheekbone or something like that, the laceration isn’t being cut from the outside; it’s actually being cut from the inside out. So if you picture under the skin, you have a sharp ridge and then you suddenly compress the soft tissues over that ridge, the ridge kind of comes through and splits the skin from the inside out. Each time it heals and you have scar tissue, it’s never quite as strong in soft tissues as the original structures. Once you get a cut usually you’re more vulnerable to another cut in that location, and that’s because the elasticity of the skin changes. If you get a scar, it’s not as elastic because there’s more collagen fibers. So when the scar tissue near where there’s previous scarring from a previous cut hits that same ridge again, now it’s more brittle and likely to split open.

The idea behind the surgery is twofold: to decrease the ridge or the pointy parts of the facial bone so they’re not going to pierce through the skin; and the second part is to take out that scar tissue that’s not as elastic and more likely to split. First they burr down the bone around the eyes or on the cheek. Burring is when they grind down that bone ridge so it doesn’t have quite as sharp a piece and you can flatten it out a little bit. And then you have to remove the scar tissue. They can either replace the scar tissue with collagen or they can stretch the other skin over, pull the other tissues over. Collagen is a fibrous tissue that your body uses to connect tissues. All over your body you have different types of collagens, but when you develop a scar, the body will deposit collagen in the tissues to hold them together. To use an analogy, when they’re laying cement and they put the wire mesh in the middle to hold it together, that sort of what the collagen is doing in the soft tissues: providing a web matrix to hold the tissues together.

It’s not an absolute solution to the problem. Actually, just the process of performing surgery you’re actually creating more scar tissue in and of itself. Every time you make a cut the body has to heal with scar tissue. The idea is that you end up with a net decrease, but who can say that? How can you measure that?

Facial reconstruction to decrease your propensity for bleeding in a fight is, I’d say, at the very least, a somewhat extreme measure to win a bout, but there is some scientific basis behind it. Ethically, for doctors there are variables. You can argue it’s ethical to help your patient in any way your can, but are you predisposing that patient to unnecessary risks? Is it something that might ultimately be harmful in the long run—making it so a guy bleeds less and so can take more head punishment? Are you risking a concussion or a traumatic brain injury for the sake of decreased risk of bleeding? There are no definite answers with this surgery. It’s on the fringe. It’s not standard practice for medical care of athletes to perform surgeries like this. It’s a controversial approach to the problem.

Part of me thinks that someone who has the condition and who tends to bleed a lot and needs surgery just to get to a place where they won’t bleed so much every time they get hit, that’s their body saying, “Maybe you’re not supposed to be a fighter.” Or, to take it one step further, maybe if as physicians we stayed out of the way, a fighter who shouldn’t be fighting would stop sooner because they do have a propensity to bleed. And maybe they wouldn’t make to as high of a level and they would start looking at other sports, other professions—sort of like a built-in release valve. I go back and forth.